Angel Garcia on Amir Khan: ‘Why would we fight Khan?’ 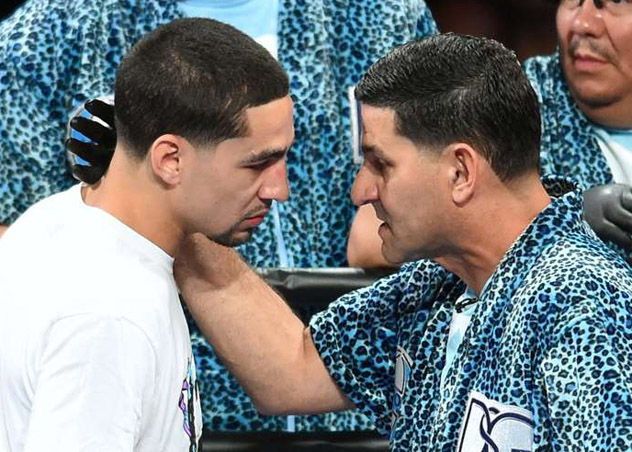 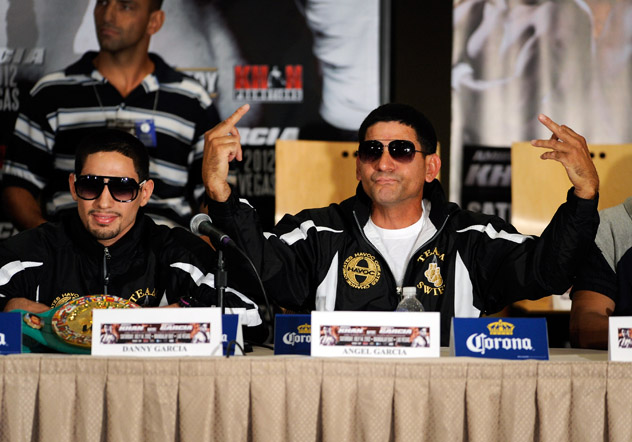 In the wake of Garcia’s decision-victory over Robert Guerrero on Saturday, WBC President Mauricio Sulaiman said that Garcia “must” fight Khan, his mandatory challenger next “by June.”

On Wednesday morning, Angel Garcia, who trains his son, was defiant and puzzled why the WBC would want his son to face Khan again after their first fight was so lopsided. Garcia (32-0, 18 knockouts) stopped Khan in four rounds in 2012, flooring him three times in a junior welterweight unification match.

“I don’t see nothing there,” Garcia told RingTV.com. “(If they fight) it’s going to be a repeat of the same thing again. Danny will knock Khan out. I’m not underestimating him butÔÇªI don’t want to get into the WBC politics. Danny is the champ. But I don’t see nothing happening there, in my opinion. I don’t think we’re even looking at that, honestly. Why would we fight Khan? There are bigger names out there right now. Khan had his time. He made a lot of money in boxing. I don’t know why he stood around waiting for Floyd (Mayweather) to fight. It never happened. I don’t see (this fight) taking place.”

At the same time, Garcia acknowledged he may ultimately have to face Khan again if the WBC threatens to strip his son of his title. Danny has no plans to vacate the title to avoid a Khan rematch, Angel said.

“We’re not trying to go on bad terms with nobody,” Garcia said of the WBC. “Were not trying to do that. Why would you be the champ and then vacate the belt? That’s disrespecting the boxing world. If we have to do it then we have to do what we have to do. But I’m just saying I don’t see nothing there for me. (But) we’re not going to run from anybody. We’re not scared of (Khan).”

Garcia was careful about calling out any future opponents, though he did say a match with the winner of Keith Thurman-Shawn Porter (he’s picking Thurman by decision) on March 12 for the WBA welterweight championship would be a “great fight.”

Angel said that Danny will definitely fight again in the next “three to four months,” erasing the possibility that his son will remain idle in anticipation of a fight with the winner of Thurman-Porter.

“We’re not going to sit around and wait eight months,” Garcia said. “That’s definitely. We got to be back in the ring no later than three to four months. So they’re fighting in March so I guess we’re fighting right after that.”

As for Thurman-Porter, Garcia believes that Thurman’s boxing ability and ring IQ will prove too much for the hyper-aggressive Porter.

“Thurman is a more smarter fighter than Porter,” Garcia said. “(Porter) fights like the West Coast, he has more a Mexican style, he just comes aggressive like Guerrero like that. A fighter like that, you have to be smart and use your legs and you could probably dominate the whole fight and Thurman is pretty good with his legs so I’m going with Thurman. I like the way (Thurman) uses the ring.”