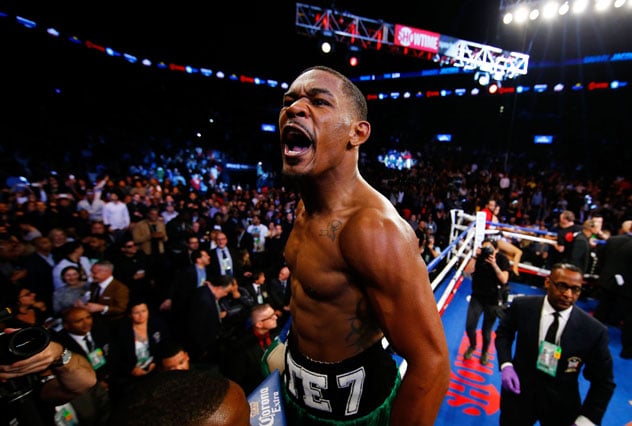 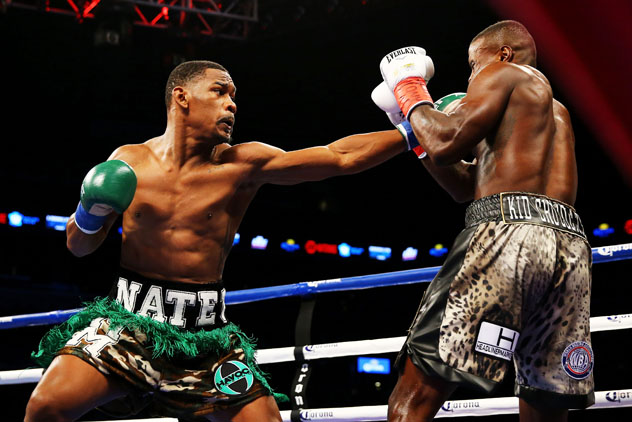 Daniel Jacobs (L) strikes Peter Quillin during what would be a brief night’s work; Quillin was stopped at 1:25 of Round 1. Photo by Al Bello – Getty Images

Those clamoring for an immediate rematch between Daniel Jacobs and Peter Quillin after their shocking December bout will have to wait.

After a dazzling first-round stoppage of Quillin, Jacobs is slated to return to the ring, likely in May at Barclays Center in an expected stay-busy fight, Jacob’s adviser Keith Connolly told RingTV on Monday night.

Jacobs, THE RING’s No. 2-ranked middleweight, will then look to pursue a title fight with WBO titlist Billy Joe Saunders later in the year, perhaps in December in what Connolly sees as another “really easy” win for Jacobs.

With talks seemingly stalled between WBA/IBF middleweight champion and No. 3 pound-for-pound rated Gennady Golovkin and Saunders, Connolly envisions a clear path to a bout between Jacobs and Saunders before the end of 2016.

“I mean, nothing is easy at this level but I find that guy to be a zero risk,” Connolly said of Saunders, who decisioned Andy Lee last month to wrest away the WBO middleweight title. “I don’t think he has any punching power whatsoever.”

Jacob’s quick win over Quillin provoked much discussion. While nobody is questioning whether Quillin was badly hurt, the debate rests on whether referee Harvey Dock should have given Quillin a chance to recover after he was in distress and didn’t seem to know where he was.

Instead, Dock waved off the fight at 1:25 of the stanza with Quillin unable to find his bearings and a glazed look on his face.

Despite retiring on his stool in a loss to Keith Thurman in July, Brooklyn’s Luis Collazo wants to fight on, says Connolly, who is now advising the 34-year-old ÔÇª Another one of his charges, 17-0 cruiserweight Keith Tapia, has an expected return date in March ÔÇª He’s also advising Chordale Booker, a highly touted middleweight from Brooklyn, who will make his pro debut in the next few months ÔÇª meanwhile, Will Rosinsky, who lost a decision to Joe Smith Jr. in December, is contemplating retirement, Connolly said.