Jarrell ‘Big Baby’ Miller grows up a bit on ShoBox 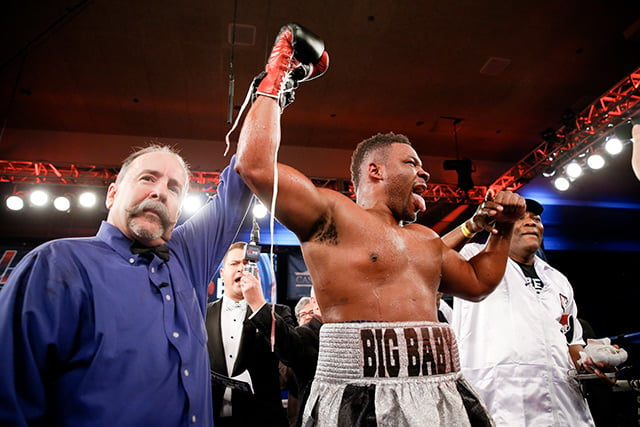 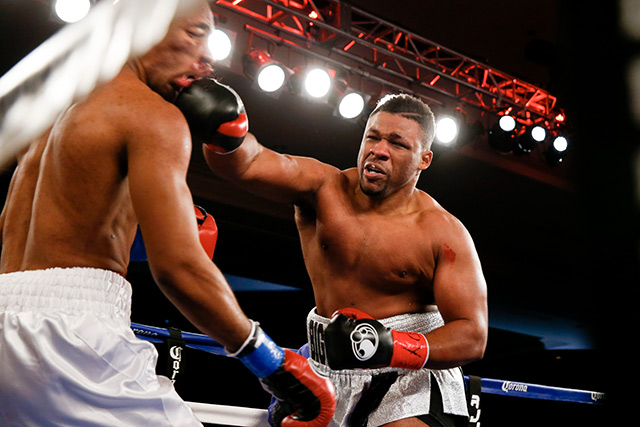 Heavyweight standout Jarrell Miller blasts Donovan Denis with a big right hand en route to stopping the game but out-gunned opponent in the seventh round. Photo by Esther Lin / Showtime

TUCSON – Jarrell Miller calls himself Big Baby. Sometimes, even babies have to grow up.

The growing-up process began to unfold Friday night on ShoBox in a test of Miller’s will and ability to go beyond a few rounds. He prevailed. Big Baby began to walk with a seventh-round stoppage of a tough Donovan Dennis at Casino Del Sol on an entertaining card that included middleweight Rob Brant’s fourth-round knockout of DeCarlo Perez.

“This was good, very good for his development,” Miller promoter Dimitriy Salita said.

Good for his future, too.

It kept Miller (16-0-1, 14 knockouts) squarely in the conversation about where the heavyweight division is headed after Tyson Fury’s upset of Wladimir Klitschko in November. It’s a scrum, a scramble of possibilities and wannabes.

Miller, who has a mouth that matches the big in his nickname, thinks he knows whom the wannabes are. Just ask him. From Deontay Wilder to Charles Martin, he’ll name just about everybody in the division. It doesn’t matter that Wilder retained his WBC title last Saturday with an impressive stoppage in New York. It doesn’t mater that Martin got a vacant IBF title on the same Brooklyn card when his opponent suffered a knee injury.

“I’d spank Charles Martin,” Miller said before winning a minor title sanctioned by the World Boxing Association. “I would. Any place, anytime. If Charles Martin and Deontay Wilder still have a belt when I get there, then I’ll knock their heads off. I’m looking to get a title shot at the end of the year.”

By the end of the year, any thing could happen, of course. Salita has his own vision for what could happen.

Let’s just say that the news conference would be loud. Very, very loud.

For now, however, Miller has other business at the top of his agenda.

“He still has to build his brand,” Salita said.

There were moments Friday night when it looked as if Miller might have to rebuild it. In the earl seconds, it looked as if he would fulfill his promise of a second-round knockout. He dropped Dennis (13-3-1, 11 KOs) twice in the opening round. Dennis walked back to his corner, looking dazed and as if he would not be able to answer the bell for the second round. But he did.

Midway through the second, he somehow found the energy and courage to go back at the 274-pound Miller, who outweighed him by more than 50 pounds. He raked Miler to the body with successive shots and then with a couple of looping hooks.

Miller looked surprised. He had never gone beyond six rounds. But by the fourth, there were signs that he knows that he had to lose some of the Baby’s inexperience. Maybe, the Baby fat will follow in a subsequent fight.

But he dug down and slowly exerted his power. Late in the sixth, Dennis, bleeding from the nose and mouth, began to look tired. Late in the seven it was over. First, Miler landed a left-right combo that put him back onto the canvas. Then, Miller followed with succession of blows for which there defense from Dennis. Referee Tony Zaino ended it 2:31 of the round, a baby step for a heavyweight with big plans.

The stoppages continued with Brant’s impressive KO of Perez in a dynamic victory for a minor 10-pound title sponsored by the WBA. After dropping Perez (16-4-1, 5 KOs) in the third round, Brant (19-0, 12 KOs) uncorked a right hand that launched Perez and sent him diving through the middle of the ropes like human missile.

“I was shocked to see him go down like that,” Brant said. “Even when you hit someone really well, you don’t expect them to go out like that. I was watching him and thinking ‘I don’t think he’s going to get up.'”

Brant might have been saying what Bakhtiyar Eyubov was saying after the first fight on the Showtime telecast. Never heard of Eyubov? He’s new to the American market. But the junior welterweight from Kazahkstan doesn figure to stay unknown for long.

Eyubov entered the ring wearing a white hat that looked like it could have come off the end of a mop. He smiled. He danced. He did a lot of things. But, mostly, he punched.

Eyubov put the show into Showtime before and after the fight. But for the two-plus rounds between his ring entrance and his celebration, there was power, a calling card that will make Eyubov hard to ignore harder to beat.

Eyubov knocked him down 15 seconds after the opening bell. He would have been down a second time in the opening round if not for ropes that kept him upright. Early in the second, Eyubov sent to the canvas again. At 56 seconds of the third, it was over by TKO. But there was nothing technical about it. It was slaughter.

It was time for Eyubov to put the hat back on. It’s what Kazaks wear, his cornermen said. It was time to dance, a traditional Kazak dance.

“GGG II,” said Salita, who looks at Eyubov and thinks about Gennady Golovkin