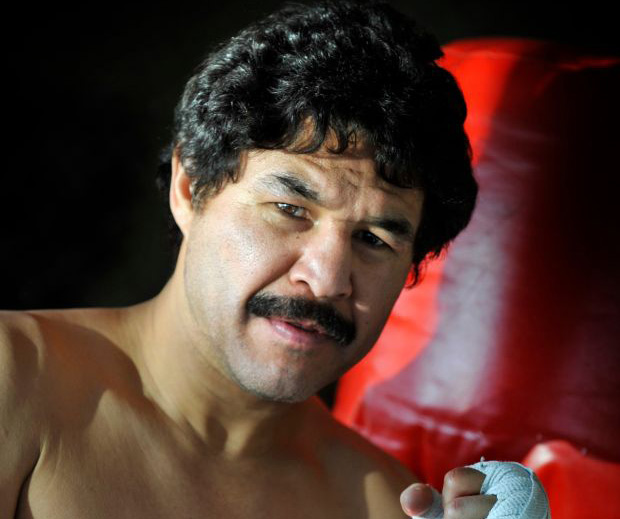 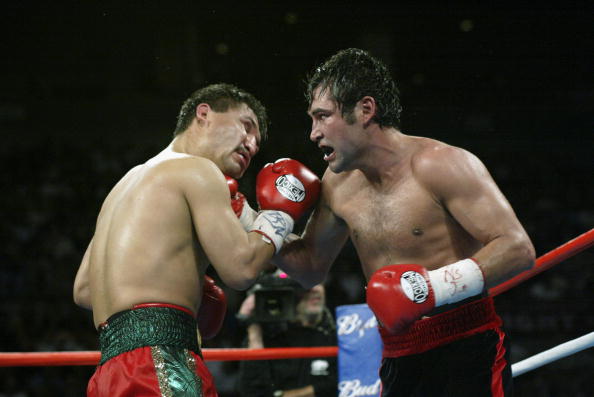 A pre-teen making his way into a boxing ring is not an uncommon sight in Mexico, especially in the largely unpatrolled small town arenas deep in the countryside back in the mid-1980s. But a blond kid climbing through the ropes of the square circle in the land of the Mayo tribe, the dark-skinned, deer-hunting natives of Navojoa, stands out like a white sheep amidst a pack of wolves. That sheep is surrounded by blood-thirsty eyes expecting to see him bark and howl and bite his way to victory or else be torn to shreds and devoured after being exposed as an outsider.

But this time, the kid with the woolly light-colored hair came through. He dug deep into his fighting heart and gutted out a victory that would be followed by more than 50 others before someone was finally able to put an end to his unbeaten streak. And far from claiming his rightful place amidst the wolf pack, he took pride in his condition of outsider by incorporating it into his own name and embarking on a 30-year long barnstorming campaign that led him to become the first world champion born in the desolate patch of land by the Pacific Ocean that he called home.

As he nears his retirement with a three-digit win column in his record and more than his share of upsets (both given and taken), the blond kid from the land of the deer reminisces about his beginnings in the sweet science of bruising with the meticulous retrospection of an old tribal storyteller.

“I started boxing I was 12 years old, and I remember being a guerito, almost blond,” Luis Ramon Campas told RingTV.com in a telephone interview from his training headquarters somewhere in the state of Montana, a deer-hunting ground in its own right. “My hair has this light coffee color even today, but back then I was blond, and my hair was yellow! And my first trainer, Salvador Mendoza, told me ‘you’ll be a champion one day, and I will give you a nickname that no one will forget. It is short but catchy. Do you know what ‘yori’ means in the language of the Navojoa natives?’ I don’t know, I replied. ‘Yori means that you are not of their same race, that you are a stranger.’ And that’s how I became a ‘yori boy’, a ‘white kid’ among the natives.”

The natives of this corner of the western state of Sonora call themselves ‘yoreme,’ and being labeled a ‘yori’ is almost a racial slur once reserved for the invading Spanish conquistadors and other hostiles. But through a long career that saw him lift the IBF super welterweight title to become the first Navojoan to hold a world championship and participate in more than a few heated battles over the course of four different decades, Campas (105-17-3, 81 knockouts) built a reputation as a tough-as-nails contender who always came to fight – and in the process, became the fighting symbol of the land that once labeled him, however symbolically, as a stranger.

And now, at his 44 years of age and a career that has driven him to measure himself against some of the best fighters of his era, Campas will put an end to his career on Saturday at the Butte Civic Center in Butte, Montana, where he will take on fellow road warrior Anthony Bonsante (34-12-3, 18 knockouts) in a scheduled 10-rounder at the 168-pound limit.

“I believe my time is expiring and the best years are behind me,” said Campas about his impending retirement, insisting that this bout will be his definitive goodbye to the sport. “Saturday’s fight will be my last. I am well physically and mentally, and I don’t want anything bad to happen to me, so I decided to retire. Every athlete has gone through that situation where we see other people doing it and we think ‘sure, I can still do that.’ But I think I have already done enough in boxing.”

For this farewell bout, Campas is convinced he has picked the right opponent to go out with a bang, a former participant of the first season of The Contender who always comes to fight and who has scored a few notable upsets of his own.

“Bonsante has been in with good fighters, there will be about 90 years of age and experience in that ring,” joked Campas about his 45-year-old foe. “He’s had his ups and downs too. He is a fighter who is a veteran just like me, he has my same age almost. It will be a great fight, we both like to fight, we both like to clash hard, and I believe it will be a tough fight for the first four or five rounds, and then we’ll go for the knockout.”

A 50-50 fight seems to be a rare occurrence in the later part of Campas’ career, where he has been routinely brought in to serve as the proverbial trial horse for younger talents, but throughout his career he has always managed to even the odds as soon as he got in the ring, aided by a numbing, two-fisted punching power from his abnormally short arms, and in spite of his shortcomings in the defense department.

“Lately, a lot of people have called me to serve as a stepping stone, but many of them have crashed hard into this stepping stone,” smiles Campas. “They thought they’d have it easy with me and then they were like ‘wow, I think I’m in with the wrong guy.’ But that’s the way boxing is. I’ve been down and up, but I always stayed busy and honest.”

His honesty is in plain view in his analysis of his long career, and he has no problem giving credit where credit is due.

“I have fought with tough fighters, and some of the best in the world,” said Campas. “But there is one who is always overlooked in my record. He was a great fighter until he decided to take a different road, and that was Jose Luis Lopez. He was a truly terrific fighter. But obviously he ruined himself. I remember him because he had a great accuracy, he could punch hard, and could take a punch, and he was a very complete fighter. If he had worked hard and prepared properly I believe he would have reached much higher than what he did.”

As gracious as he is when making laudatory remarks about a guy who defeated him soundly, only to fall into a spiral of drugs and decay just like Lopez did, Campas is equally forthcoming when talking about his frustrations both in and out of the ring.

“H├¡jole, s├¡! That was my fight!” said Campas about his famous do-or-die crossroads bout with then-unbeaten titleholder Felix Trinidad back in 1994, in a bout that defined both of their careers. “I believe that if I had defeated Trinidad back then it would have been a game-changer for me, because being undefeated with so many knockouts I was a big deal. I had a very tough fight against Trinidad, we were both in our prime, and unfortunately he broke my nose. He hit me from nowhere and broke my nose, and that was that.”

Trinidad, of course, went on to become a longtime champion and a Hall of Famer in his own right, and it looked like Campas would take the exact opposite road after that fight. But the short, almost boyish Campas took his resilience and desire to win to the next level and earned a few extraordinary wins during the next 20 years to win titles he was not supposed to win and victories he wasn’t expected to achieve. And few of them stand out in his long list of ring recollections.

“My fight with Tony Ayala,” said Campas, when asked to list his most outstanding wins. “It was a great fight. They tried to use me as a stepping stone there too, and I had just lost a fight with Oba Carr. And they called me because I was a former world champ and they thought they’d use me, but I demonstrated that I still had a lot in the tank. Another great fight was against Raul Marquez. I’ve had a lot of interesting fights. With (Alejandro) Terra Garcia, the former world champ, I also had a good one, I stopped him in one round. And may other great fighters that now escape my memory.”

The easier ones to remember, as usual, are the few frustrating occasions in which, according to Campas, the judges were unable to overcome the preordained notion of his condition of mere opponent du jour against the young unbeaten contender on the way up.

“There are fights that I lost but I still think I won, like the ones with John Duddy, or Matthew Macklin in Ireland. I think I won that one too,” said Campas. “There were a few that I thought ‘no way I lost this fight.’ When I lose, I admit it. But those were fights that were really doubtful and I wasn’t happy about the outcome.”

His own memories aside, Campas believes he has done enough to warrant even better memories in the minds of those who have witnessed his best moments in the ring.

“As a fighter, I would like people to remember me as a clean fighter, an athlete that was never involved in any controversies,” said Campas, weighing in on his legacy after his departure from the sport. “I never disrespected nobody, and nobody has anything to say about me. I’ve been a good athlete and a good person. I feel great, I truly feel great physically and mentally, I still feel good. That’s the lesson I take from boxing. I’ve had a lot of fights and yet I am not hurt, and I believe that I should be grateful for being so disciplined outside the ring. I work out, I fight and I go home, it’s always been like that.”

As the end draws near on his storied career, Campas eyes a return to his old deer-hunting country with a new hunt in mind, trying to find the next one-in-a-million blond kid in the land of the yoreme that could one day become the new pride and joy of Sonora.

“I want to open a gym and start making new champions,” said Campas, about his impending return to his homeland in search for a new life on the other side of the ropes. “Right now I am in Montana, but I will be moving back to Mexico and my homeland has given me a lot. It will take some time to get a stable of fighters going, to forge a champion. But I will open a nice gym and I will continue working with boxing in Navojoa, Sonora, my homeland. As a lesson in life, boxing has been great to me, and there are a lot of things for me to do and work without leaving boxing behind.”