From THE RING Archives: George Foreman interviewed in 1976 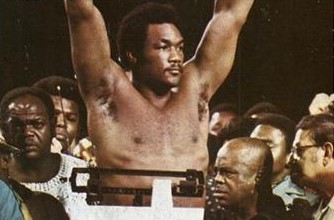 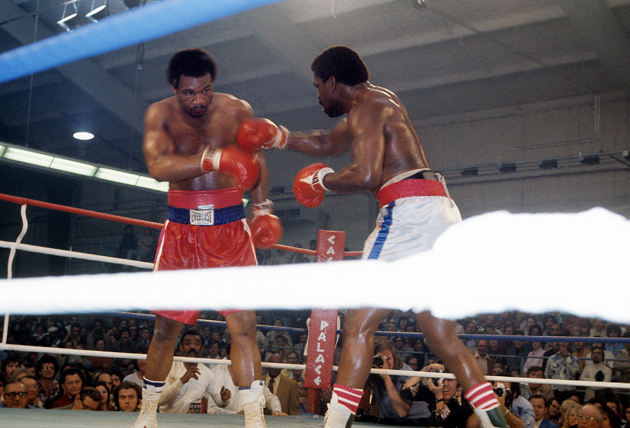 George Foreman gets ready to exchange punches with Ron Lyle during their classic shootout at Caesars Palace in Las Vegas in 1976. Photo by The Ring Magazine/Getty Images

The feature below, which includes an interview with George Foreman recorded just days before his fight against Ron Lyle, originally appeared in the May 1976 issue of THE RING Magazine. It was authored by Shirley Norman and is being represented to RingTV.com readers by Tom Gray.

Today marks the 40th anniversary of George Foreman’s sensational fifth-round knockout of Ron Lyle. This classic heavyweight punch-up won THE RING Fight of the Year for 1976 and THE RING Round of the Year (4 and 5). Foreman, who was in the ring for the first time since his loss in “The Rumble in the Jungle,” was also voted THE RING Fighter of the Year.

Once he was heavyweight champion of the world. He was idolized ÔÇª adored ÔÇª and revered.

Then, suddenly, he was maligned and criticized for not defending his title often enough – and for defending it against unworthy contenders.

And then, one fateful night in Zaire, Africa, he defended that title against the worthiest contender of them all, Muhammad Ali, and to Ali he lost his coveted heavyweight crown.

The boxing world all but gave him up to oblivion, and rumors were rampant that losing the title had psyched him out, that his exhibition bouts were fiascos, and that he would never have a shot at the heavyweight crown again.

But George Foreman has proved them all wrong. With brains and brawn and sheer gut determination. George has climbed back to the top of the heap, and proved that he’s a man to be reckoned with in the aura of the top heavyweight contenders.

The now historic bout of Jan. 24, 1976, between George Foreman and Ron Lyle was, in George’s own words, “the toughest fight of my life.” 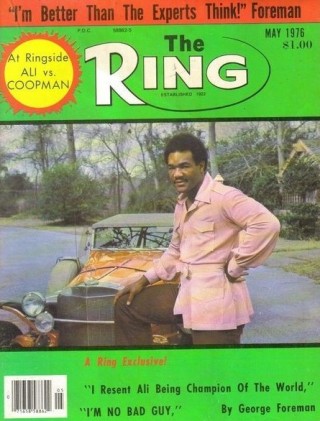 It was a life and death battle between two of the toughest human beings in the world. Lyle knocked Foreman down ÔÇª Foreman knocked Lyle down … George was down again ÔÇª and then, in the fateful fifth round – Foreman maneuvered Lyle into a corner and pounded him into a brutal knockout.

“No referee is ever going to count numbers over me again,” states a fiercely determined George Foreman who has his sights on just one goal: regaining his heavyweight championship crown.

In George’s corner these days is the vital factor that was missing for so long. That factor is: someone who cares. And that someone is Gil Clancy, Foreman’s trainer.

Throughout the brawling battle of Jan. 24, George Foreman, battered and bruised since the first round, kept looking at his corner for words from his trainer. Clancy’s instructions and inspiration were certainly instrumental in Foreman’s dramatic upset of the rock-like Ron Lyle.

George knows the mistakes he’s made in the past – and he’s correcting them all. He’s got his head together and his goals in sight – to regain the heavyweight championship of the world.

In the weeks before the Lyle fight at Caesars Palace in Las Vegas, Foreman was besieged by press and promoters. But his first exclusive in-depth interview was granted to your RING reporter, who was the only woman ever to interview him three years ago while he was champion.

Foreman is as kind and gentle in private as he is brutal and ferocious in the ring.

In the Caesars Palace coffee shop, fighter and writer convened in a private corner, and a genial George Foreman answered all our queries in his own gracious low-key manner.

THE RING: Do you feel strongly that you were sabotaged before your fight against Ali in Zaire?

George Foreman: You know, so many things went wrong over there I wasn’t even surprised that I lost that fight and my title. Such weird things kept happening. Like I got hit (cut) over the eye, my dog mysteriously got hurt, they kept changing my living quarters, and then I got into a five-car accident. How do you explain all that?

THE RING: Do you feel that your own people weren’t looking after you properly?

GF: Yes, I felt like the protective shield over me was gone. There was a complete lack of concern about my well-being. There were arguments during training, and all kinds of things occurred that shouldn’t have happened.

THE RING: Has all that changed now?

GF: Yes, I think I’ve learned from my mistakes. And most of all I’ve gained maturity. I was inexperienced at being famous, and I didn’t realize that I was the one in command – and it was up to me to get things done my way. When I was champ, it was like being made king of a country. That’s not good for you when it happens so suddenly.

THE RING: Do you feel your former associates took advantage of you and that this lack of concern might have cost you your title?

GF: So many people just didn’t do anything. They let me get into lawsuits. They let that incident happen in Caracas where the government stopped me at the airport to get their taxes on my purse from the (Ken) Norton fight down there. Finally I had to step in and figure out – I am a mature man – and now I’m gonna do things my way.

THE RING: How dreadful was the feeling the day you realized you had lost the heavyweight title?

GF: When I finally came to the realization of what had happened, I was able to figure out why. And that kept me from feeling too frustrated or depressed. Besides, I didn’t have to bear it all by myself. I have a mother and sisters and brothers who are in my corner no matter what happens.

THE RING: Do you feel you’ve got everything together now – in your mind, in your body and in your punches?

GF: I sure have. You know, life always goes on. And besides, only 10 percent of George Foreman is the boxer. The other 90 percent is George Foreman – a family man, a Christian man and a God-fearing man.

THE RING: Boxing fans have said that your knockouts are always scored early.

GF: That’s not my fault. I’ve never been the kind of guy who likes to play around with an opponent to keep getting him off the hook and letting him off. I don’t try to prove anything by keeping the fight going and softening a guy up when I don’t have to. That’s why I’ve had early knockouts. If I get a guy in trouble I finish him off. Knock him out when he’s fresh instead of toying with him. 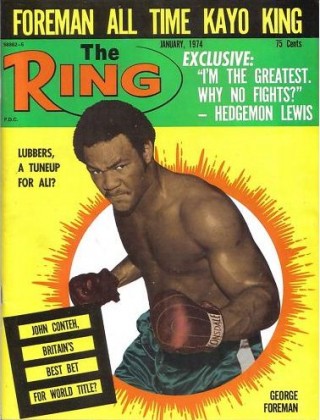 THE RING: Do you feel you have the staying power to match your punching power, so you could still win in a fight that went the distance?

GF: I can go 12 rounds if I have to. I can outsmart and outpunch any heavyweight in the game today. To me there is only one man I stand in awe of. And that’s Joe Louis. To me he’s the only true celebrity in the world.

THE RING: You’ve been criticized for your exhibition bouts, especially the one in Toronto where you fought five opponents.

GF: That was planned basically for fun. I didn’t realize those five guys wanted a real serious fight. I know this brought a lot of criticism, and it was a mistake in judgment on my part. I wouldn’t do it again. As I said – I’ve matured.

THE RING: You’ve also been criticized for your inactivity, especially when you were champion.

GF: That was a mistake too. I don’t ever intend to be inactive again. And I’m gonna be training constantly at my camp in Livermore, California. You know, it’s funny about training, I love it and I hate it. But I realize how much I love boxing.

THE RING: You’ve taken a great liking to ferocious animals. We hear that you have a lion and a tiger at your Livermore training camp.

GF: That’s right. You can learn a lot from animals. You know, animals invented fighting. The best athlete in the world is the cat. And my tiger is an example of how to move effortlessly. He doesn’t have stamina, but he knows how to move and dodge and make the most of inner strength. I learn a lot by watching him.

And my lion teaches me how to move proudly like he does. He’s the king of the jungle, and when he moves you know he’s in command. He knows who is afraid of him and who isn’t. My pet lion can be very affectionate, but only with me. Nobody else can go near him.

THE RING: Now that you’ve hired Gil Clancy as your trainer, do you credit him with your change in attitude?

GF: Gil’s the greatest in this business. I accept his suggestions and he accepts mine. We work together. But, like I said, a man has to be a man, and you can’t designate someone else to do everything for you. I have to be my own man and do things for myself. What you do in boxing, you also do in your personal life. You do things yourself and handle yourself like a man.

THE RING: Do you think the glamour of being world heavyweight champion went to your head?

GF: When I was champ, people were always kowtowing to me. And I made a lot of mistakes in judgment. But, as I said, now I’ve gained maturity, and I’m my own man.

THE RING: Do you feel that the indifference with Dick Sadler, your former manager, may have been responsible for some of these errors and may have even cost you the title?

GF: Dick is two different people. He’s one man in the boxing world and another in the general world. Let’s just say we still speak. I don’t hate or even dislike anybody.

THE RING: And now, your one goal in life is to regain the heavyweight championship. Is that right?

GF: That’s right. I’m gonna do everything I can to jeopardize Muhammad Ali’s ego – and his title. I resent somebody else being heavyweight champion of the world. 1976 is going to be my year. The world is gonna see a very active and a very winning George Foreman. Right now – I’ll do anything in the world to be champ again!

Note: At the post-fight press conference, following Foreman’s dramatic fifth-round knockout of Ron Lyle, George summed up his victory in these words:

“This was one of the toughest fights I ever had. But I won. Sure I got knocked down twice, but a champion is supposed to get knocked down. Even Joe Louis has been knocked down. But I won the fight. They say everyone loves a winner and the world is gonna be loving me for a long time to come. 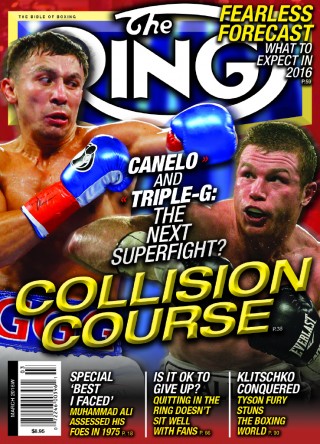 In the March issue of THE RING Magazine George Foreman recalls one of his finest triumphs, “When Lyle floored me, the first thing through my mind was, ‘What excuses do you have now, George? He’s knocked you down, you’re hurt, and when you get up he’s gonna knock you down again.’ I said to myself, ‘I’m getting up and you’ll just have to kill me.’