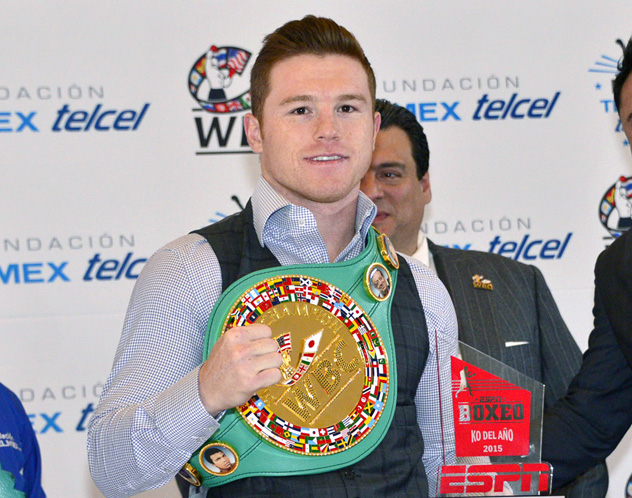 RING middleweight champion Canelo Alvarez received the WBC Diamond belt he won in his November victory over Miguel Cotto on Monday in Mexico City, according to a press release issued by Golden Boy Promotions on Monday.

“I feel very honored to be here today to and receive the WBC middleweight world championship belt,” said Alvarez. “I am also very grateful to the WBC for granting me my second division world title. This is a very big step in my career and I am looking forward to my upcoming fight in May.”

The Diamond belt is an honorary championship not subject to defense, given to Alvarez on top of the legitimate WBC world title he won against Cotto.

“The WBC is very proud to see him join the Diamond belt champions with such icons like Floyd Mayweather, Manny Pacquiao, Sergio Martinez, and Bernard Hopkins. These are great and exciting times for boxing,” said Sulaiman.

“We are very proud of Canelo and his accomplishments,” said De La Hoya. “Canelo is now one of the most recognizable faces of boxing, and we are grateful to the WBC for their support.”

The Cotto-Alvarez bout on Nov. 21 featured two elite fighters in good form but it was Alvarez who came out on top in a one-sided decision – 117-111, 119-109, 118-10 – by landing the harder, cleaner punches at Mandalay Bay in Las Vegas. Thus, Alvarez, a 25-year-old former two-time junior middleweight champ, added the WBC title to his collection and became the first Mexican fighter to win a RING title above 154 pounds.

The fight was also a success in business terms, with 900,000-plus pay-per-view buys a good omen for Canelo’s future as a marketable star.