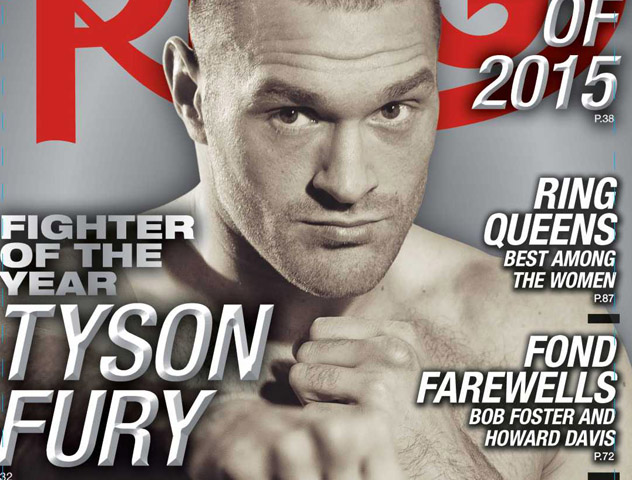 The year-end awards had been released for over an hour and so this reporter thought it safe to call THE RING heavyweight champion Tyson Fury for his thoughts on annexing the Fighter of the Year award for 2015. 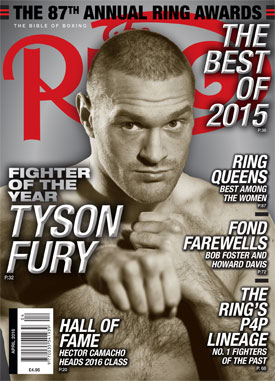 The 27-year-old Fury, who was nominated on the strength of a stunning unanimous decision victory over the seemingly invincible Wladimir Klitschko on Nov. 28 in Dusseldorf, Germany, had absolutely no idea that he had won.

“I’ve won the RING Magazine Fighter of the Year,” said Fury to whomever was with him before the scale of his achievement registered. “Go on the Gypsy King. That is a very prestigious award, isn’t it? Has anyone else accomplished that from Great Britain?”

I reminded Fury that friend, virtual neighbor and former two-weight world champion Ricky Hatton won the Fighter of the Year award in 2005, when he dethroned junior welterweight boss Kostya Tzsyu before unifying the division later that year against Carlos Maussa.

“I’m the Fighter of the Year for The Bible of Boxing.”

Fury was a teenager when Hatton became the first RING Fighter of the Year from U.K. shores and he is delighted to follow in his footsteps. He also held off elite pound-for-pound opposition in Canelo Alvarez, Gennady Golovkin, Roman Gonzalez and Floyd Mayweather Jr. to claim the prize.

“They’re all great fighters,” said Fury in earnest. “I’ve done really well to come first when I was up against that lot and I still can’t believe it.

“I’m just ecstatic to be part of a very short Fighter of the Year list from Great Britain and Ireland (Fury is extremely proud of his Irish Traveller heritage). It’s like a VIP club and Ricky is a friend who is from the same part of town as me and that makes this all the more special.

“As far as I’m concerned, the RING Fighter of the Year award is the biggest and best award in boxing.”

Click here to see past winners of THE RING’s year-end awards.