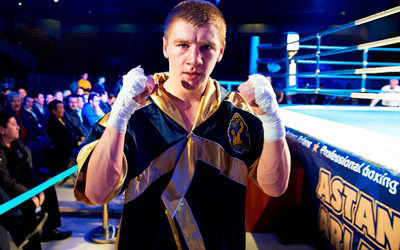 Unbeaten Ukrainian welterweight Ivan Golub will face Juan Rodriguez Jr. in an eight-round fight on the undercard of the WBC heavyweight title fight between Deontay Wilder and Artur Szpilka at Barclays Center in Brooklyn, N.Y. on January 16.

The southpaw vs. southpaw fight was confirmed by promoter Lou DiBella. Rodriguez says the fight will take place with an agreed upon weight limit of 148 pounds.

Golub relocated to Brooklyn to begin his pro career under promoters DiBella and Fight Promotions and was last in action this past October, stepping down from middleweight to stop Dominican fighter Kendal Mena at 150.5 pounds.

Rodriguez (12-3, 5 KOs), of Union City, N.J., will be looking to correct a streak that has seen him lose three of his last four fights after starting his career 11-0. The 2009 New Jersey Golden Gloves champ says he had never previously heard of Golub but is no stranger to fighting unbeaten Ukrainians, having lost an eight-round decision to the Freddie Roach-trained Taras Shelestyuk in April of 2015 on ESPN Friday Night Fights.

Rodriguez, 29, is taking the fight on one-week notice but had been in training or a Jan. 12 fight that fell through and had spent two weeks in Philadelphia helping former junior welterweight champion Danny Garcia in sparring.

“This is a big stage for me right now and I know the cards are stack high against me,” said Rodriguez, who is now training with Guillermo “Lucky” Sanabria.

The Wilder-Szpilka fight will headline a Showtime Championship Boxing card, which will be televised live beginning at 9 p.m. Eastern time.