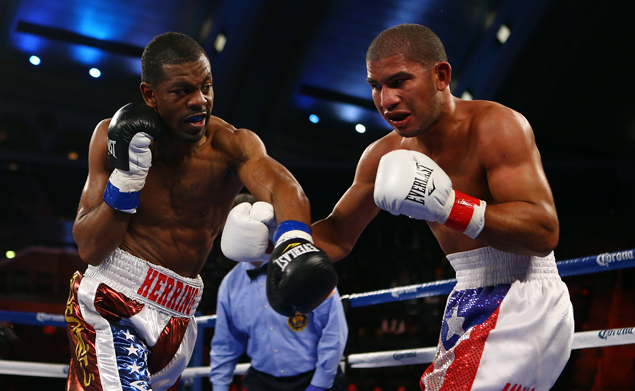 Former US Olympian Jamel Herring has a busy 2016 planned out, beginning with his first televised main event on Feb. 9 against obscure Colombian banger Luis Eduardo Flores at the Sands Casino in Bethlehem, Penn., and concluding – he hopes – with a world title opportunity.

Making it to the main event level was never a guarantee for the former US Marine following his run at the 2012 Olympics, in which he lost in the round-of-32 to Kazakh boxer Daniyar Yeleussinov.

After the amateurs, teammates Errol Spence Jr. and Marcus Browne received the majority of the attention and expectations, while Herring quietly turned pro at the end of 2012.

“After the Olympics, I was the one who was not supposed to do so well at the pro level,” said Herring, who won all four of his outings in 2015. “It’s a blessing for how far I came from where I started at.”

Flores, 28, has yet to be stopped since turning pro in 2011. His biggest win came in March of 2014, when he stopped previously unbeaten Mexican Miguel Berchelt – then 21-0 – in one round.

Herring says he has been working in Cincinnati with his trainer, Mike Stafford – best known for his work with Adrien Broner – but will finish up camp in Washington, DC.

“(Flores)’s supposed to be a big hitter, a power puncher,” said Herring. “I still respect every opponent as I did the last but I’m not really impressed by what he did in the past because, looking at his resume, I feel like I’m one of the better fighters he’s fighting.”

Should he win, Herring says his adviser, Al Haymon, has promised a title opportunity in 2016.

“That’s actually the plan that Al Haymon drew up himself and he told me over the phone a few times,” said Herring. “Hopefully some time this year, actually, we’re gonna see if we can go get a title fight somewhere.”