2015 RING Awards: Finalists for Knockout of the Year 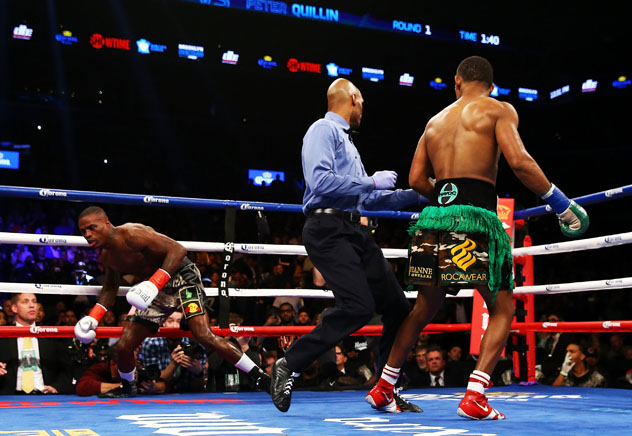 Peter Quillin (L) falls against Danny Jacobs during their middleweight bout on Dec. 5, 2015 in Brooklyn. Photo by Al Bello/Getty Images

Leading up to the announcement, we will give you the five finalists in one category each day. Day 7: Knockout of the Year

The finalists (in chronological order) are:

In round one, Kirkland explodes out of the blocks to put immediate pressure on the Mexican who drops his overly aggressive opponent with a straight right. The “Mandingo Warrior” rises gamely but ships heavy punishment before two more knockdowns prove decisive in the third. The finishing shot is a massive right to the jaw.

Huck, the WBO cruiserweight titleholder, came to Newark, New Jersey, for his U.S. debut with the idea of enthralling American fans while also setting the record for successful consecutive defenses in his division. He left without his belt as he was dropped twice in Round 11 by Poland’s Glowacki, prompting referee David Fields to waive a count.

With only five knockout victories heading into his rematch with Danny O’Connor, Gabriel Bracero wasn’t known as a hard puncher. But a single overhand right landed flush and sent O’Connor crashing onto his back, unconscious. Elapsed time: 41 seconds.

Jacobs landed a hard right that took Quillin off Flatbush Avenue and put him on Queer Street in the Battle for Brooklyn. Jacobs then landed 27 of 53 punches, including the temple shot that sent the challenger reeling and caused referee Harvey Dock to wave the fight off after only 85 seconds.

Vicente’s one-punch takeout of Dominguez looked a lot like Bracero’s, the big difference being that it happened in the third round. An overhand right found the mark in the featherweight contest and Dominguez went down onto his back, so out that he had to be removed from the ring on a stretcher.

Tomorrow: Trainer of the Year finalists.