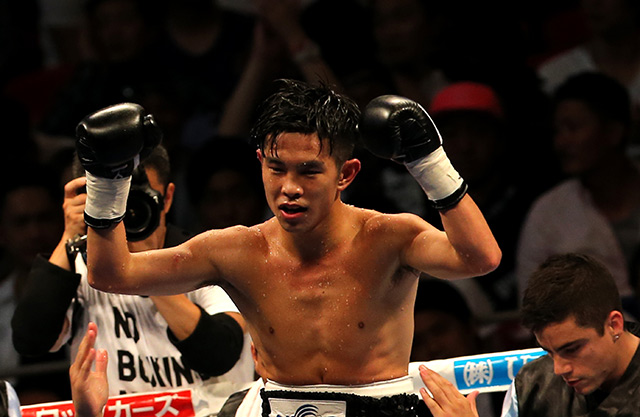 In a highly charged rematch in his hometown of Osaka, Japan, Kazuto Ioka (19-1, 11 knockouts) defended his WBA flyweight belt with an 11th-round knockout of Juan Carlos Reveco (36-3, 19 KOs) on a big New Year’s Eve boxing card in Japan.

The bout was dead-even in its first two thirds, with both fighters alternating to take control of the action. Ioka was the controlled and accurate aggressor, while Reveco managed to score a few rounds of his own based mostly on an overwhelming punching rate. However, the changes promised by Reveco after his majority decision loss back in April 22 on this same stage failed to materialize, and the Argentine former champ never showed the improvements in footwork and defense needed to dominate the technically polished Ioka.

The bout was even on most unofficial scorecards after eight rounds, but in the ninth a cut was seen over Reveco’s left eye, and the referee halted the bout briefly to have it examined by the ringside physician. A brief moment of unrest unfolded during the rest period between the ninth and 10th rounds when the doctor wanted to check on Reveco’s cut while his corner was working on it. Trainer Charly Rodriguez complained about the inappropriate and illegal procedure to no avail, and the intrusion did not end up being a factor in the outcome of the fight.

Ioka continued his surge in a dominating 10th round, pummeling a hurt and defenseless Reveco on the ropes and setting up a brutal 11th round in which he connected at will and capped his salvo with a crippling hook to the midsection that sent Reveco face down to the canvas in pain. Reveco got up at the count of eight, but winced in pain after being asked about his willingness to continue and the fight was stopped to award an 11th round stoppage to Ioka, who defended the title for the second time.