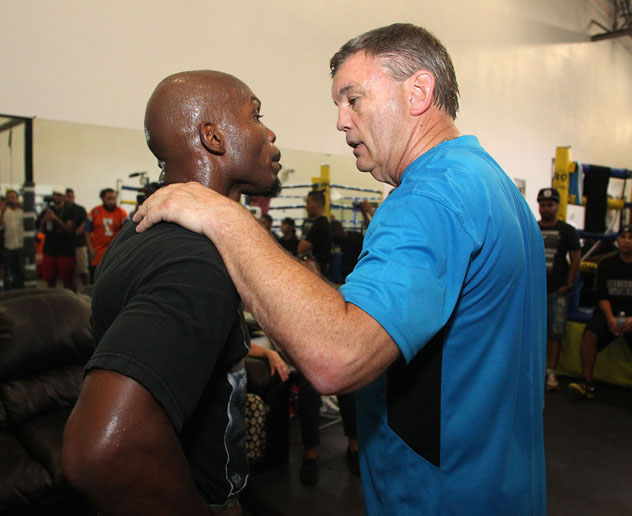 He hasn’t heard from his fighter, so until he does, and gets the thumbs up, Teddy Atlas isn’t booking his room in Vegas. But he has been told that yep, his guy Tim Bradley will get a chance to break that 1-1 tie and send Manny Pacquiao off into retirement with an ersatz Rolex as a gift. A loss as a going away gift, that’s what Atlas and Bradley are, of course, planning for Pacman on April 9.

The Staten Island-based trainer was asked how he plans to have his guy do better this time, get the clear nod. “We’d correct the mistakes from the first two fights, use his experience from the past. A lot worked well in those first two fights, and then we’ll learn from our past. It’s what winners do, what smart people are supposed to do.”

Bradley, Atlas thinks, is in a stellar place, mentally and physically. The trainer has been an analyst with ESPN for two decades, and over the years, viewers are used to him saying that boxing is 75 percent mental. If that’s true, then he’s thinking Bradley is in a sweet spot.

We talked about Bradley’s ambition, fire, drive, will to win. It’s not exactly a burning ambition, Atlas said. All the top guys have burning ambition. All are tough. It’s a matter of degrees in that sphere..but one difference in Bradley is he remembers where he came from, when he had $11 in his checking account, and he’d received an eviction notice.

I will NEVER got back to that, that ricochets through his head constantly…and it it catalyzes him, said the trainer.

“If it happens, and it’s official, then we understand what we’re facing,” Atlas said. “Pacquiao is one of the best fighters of the last decade, and that’s a challenge and we have a responsibility to be ready. And also, we appreciate it, the opportunity to be part of such a special fight.”