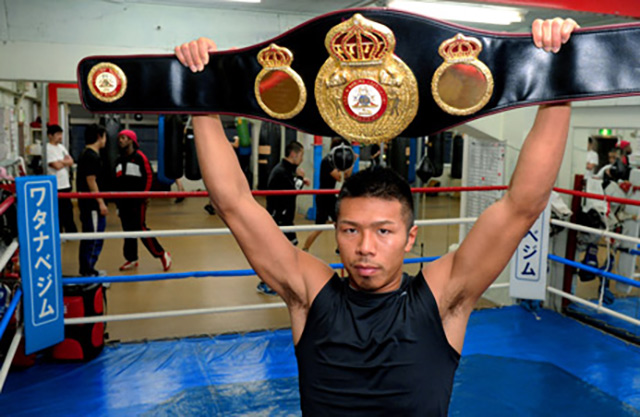 Takashi Uchiyama looks to keep up his tradition of defending the WBA junior lightweight title on New Year’s Eve when he faces Oliver Flores (27-1-2, 17 knockouts) at his home away from home, the Ota-City General Gymnasium in Tokyo.

If the aggressive but accurate boxer-puncher is successful, it will be the fifth consecutive year he has retained his title on New Year’s Eve. Uchiyama has made 11 title defenses in total.

The long reigning champion – and consensus number one at 130 pounds – turned 36 in November but dismissed the notion that the younger challenger may be hungrier than he is.

“I am hungry too [laughs],” Uchiyama told RingTV.com through Tomoyuki Kataoka. “I am as hungry as Flores; I am always hungry just like young boxers. I am an old professional, an older boxer will have no chance if he loses once. A younger boxer of 24, like Flores, has another chance to challenge for a world title.”

If successful Uchiyama will surpass Acelino Freitas, Azumah Nelson, Samuel Serrano and Alfredo Escalera who all made 10 junior lightweight title defenses. Only Brian Mitchell who defended the same WBA strap 12 times has more defenses than the heavy handed Tokyo resident. He will also close in on Flash Elorde’s record for longest consecutive title reign at 130 pounds. Elorde held the world title for seven years, three months, while Uchiyama has held his crown for a few days shy of six years. He also closes in on Yoko Gushiken’s national record for most world title defenses by a Japanese world champion, currently standing at 13.

Uchiyama (23-0-1, 19 knockouts) is guided by Watanabe Boxing Gym founder Hitoshi Watanabe, who is very proud of his star client. 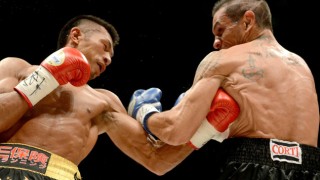 “Uchiyama is absolutely a masterpiece of my gym,” said Watanabe. “He is a great leader, leading other boxers of my gym. He is the best boxer, has great gifts, continual efforts and fierceness of fighting. He has [a] great sense of utilizing his past experiences for his future bouts. Therefore, he is still growing as a boxer even though he is now in [his] 30s. He is also a man of great personality. I can introduce him to everyone with confidence.

“In the past, because of his hard punches, he [has] injured his fists many times. However, if he is in the best condition, he will be able to prevail against any first-class fighter all around the world. I would like to give him a great chance to fight the best to prove he will prevail against such a fighter.

“I would like him to break a Japanese record of 13 consecutive defenses achieved by Mr. Yoko Gushiken. In addition, I would be grateful if he could reign as a world champion for more some years from now on.”

RingTV.com – What are your thoughts on facing Flores?

Takashi Uchiyama – As usual, all I have to do is to prevail against a challenger, i.e., Mr. Flores. Of course, I have a desire to break the Japanese record of Mr. Gushiken. However, I always concentrate to win a bout one by one.

RTV – What do you see as his strengths and weaknesses?

TU – His strengths are his youth and momentum as a boxer. His weakness is his roundhouse. His youth is also his weakness. He may show signs of his mental vulnerability. I had my momentum as a boxer in the past; however, I always regretted what I had done in a bout I won. Prior to my debut as a professional boxer, I had thought that I could win a bout with any boxer by KO easily. I was too optimistic. Even now, I try to obtain any new technique.

RTV – This will be your 11th title defense. If successful you will pass Acelino Freitus, Azumah Nelson, Samuel Serrano and Alfredo Escalera who have all made 10 defenses. Only Brian Mitchell will have more than you. What are your thoughts on that?

RTV – The legendary Yoko Gushiken holds the record for most world title defenses by a Japanese world champion. How important is it to you to break his record?

TU – Even if I can break his record, I cannot say with absolute certainty that my record is better than his one since he and I are in different ages.

RTV – Your last fight was an impressive second-round stoppage over Jomthong Chuwatana. What can you tell us about that fight?

TU – Though I was able to win by TKO at the second round, it was a very nervous match. Jomthong is also a strong boxer and therefore the key point of the match was which one would be able to land his good punch on the other one. Fortunately, I could land my straight right punches on him more accurately than him. When I faced him at the ring, I felt in my bones that he could be a great boxer; however, I also felt that I could land my right-straight punches. I was eager to knock him out in an early rounds since I could not imagine what would happen when we went to the middle rounds. This is because I could not do sparring for one month prior to the bout since I had a crick in (my) back and an (aching) left elbow.

[Editor’s Note: Uchiyama successfully underwent surgery after the Jomthong bout in late May to remove cartilage from his left elbow.] 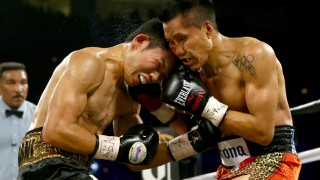 RTV – In November, former foe Takashi Miura lost his WBC 130-pound title against Francisco Vargas in a terrific fight. What did you think of that fight?

TU – It was an interesting fight. No one could know which one would win. It seems that Vargas was much damaged; however, Miura was also damaged by many punches.

RTV – It had been mentioned for a while that you and Miura may face each other in a rematch at some point in a WBA-WBC title unification bout. Those plans were derailed when he lost.

TU – I do not know of that very well. (If there was a) plan, it collapsed once (Miura lost to Vargas). However, I think that the same kind of plan will arise when Miura recaptures the world championship. I do not have any problem fighting him.

RTV – With the Miura fight for now unlikely to happen, if you are successful against Flores who are you targeting?

TU – I would like to bout with Mr. Javier Fortuna and any other champions of world major sanctioning bodies.

TU – I love driving my car. I do not go for a long drive; however, I sometimes I go to mountains or beaches on holidays by car.

RTV – In closing do you have a message for Flores?

TU – Let’s have a good bout under the best physical condition.