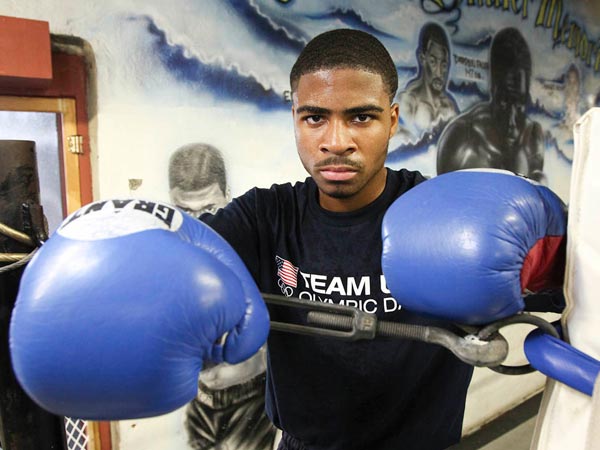 Best night of pro career: Back in April, Fulton knocked out Jamal Parram in three rounds. Parram had previously taken Randy Caballero five rounds and went the eight-round distance with Manuel Avila. He feels beating Parram was his best pro outing so far.

“I think it was Jamal Parram because I got a KO in front of my mom and dad and my hometown family,” Fulton told RingTV.com. “He had a lot of experience; he fought a lot of good people and, also, he was a southpaw.
“Also, Sam Rodriguez, in my last fight, because he was undefeated (3-0, 3 knockouts) and that was a kind of step-up fight for me.”

Worst night of pro career: After seven fights, Fulton is satisfied with how he’s performed in each bout.

“I don’t really think that because, as time was going, I was progressing,” he said. “If I fight any of them (previous opponents) now, I would look even better because I’m already developing and still getting better.”

Next fight: Fulton looks to close out the year with his fifth win when he faces Joshua Greer Jr. (3-0-1, 2 KOs) on the undercard of the final Premier Boxing Champions show of 2015, headlined by Omar Douglas-Frank De Alba Tuesday at the Sands Bethlehem, Bethlehem, PA.

Some fighters would struggle with fighting over the festive period, it’s not a concern for Fulton, who is a Muslim and doesn’t celebrate Christmas.

Why he’s a prospect: Fulton was a very solid amateur; he won Ringside and Junior Golden Gloves as a junior before moving into open class, in which he won the Golden Gloves in 2013 at 52 kilograms (about 115 pounds), came in second at the National Championships. He fought in the semi-pro World Series of Boxing, going 2-1. He attempted to make the Olympics, losing in the final of the Reload tournament and semifinal round of the Last Chance tournament.

Fulton wasn’t bothered by missing out on the Olympics: “I kind of felt that the Olympics didn’t mean anything to the United States of America anymore. I think it’s bigger for the other countries. The pros is bigger over here than it is anywhere else.”

During his time in the unpaid ranks, he went 1-1 with Shawn Simpson, beat Gary Russell (who recently won a place on the US team to try to qualify for the 2016 Olympics, not to be confused with older brother WBC featherweight titlist Gary Russell Jr.), lost to Aujee Tyler and got dropped and lost a decision when he met 2012 Argentinean Olympian Ezequil Melian in the WSB.

Fulton is very pleased with how things have gone thus far in his 14-month pro career.

“I feel as though I’m developing great; I’m developing at a nice pace,” said the 21-year-old. “I’m staying in the gym, so I’m getting better and better each fight and I’ll get more knockouts.”

There is no particular area in which he feels he needs to improve; however, Fulton feels he can improve across the board.

“There’s always room for improvement. I can’t just pick out one (area),” he said. “Everybody’s still learning, no matter who you are; we still learn as we go on in this sport just as we do in life.”

He may not have found his man strength as yet, at just 21, but a 43 percent stoppage ratio seems to indicate he’s more a boxer than puncher.

“I can punch but I would say I’m more of a laid-back type of pick-you-apart fighter and beat you,” he explained “But now I’m learning my strength and I’m learning how to stop these guys, so now that’s a transition. You learn more and more. (Featherweight contender) Eric Hunter was just working with me in that area and now I feel I can stop anybody.”

Storylines: Fulton grew up in a tough neighborhood in Philadelphia, one of four children, and the only boy. He became interested in boxing when he was 12, after his father came out of prison, and had his first fight at 13.

“My father was incarcerated,” he said. “He came home and took me to the gym. I met up with my trainer and we sat there talking and he said, ‘We’re training kids; you want to come by?’ They showed me pictures of their fighters and I was like, ‘I wanna box,’ so they came to get me the following week and I started training but they thought I was gonna quit because the workouts are kinda hard and most kids don’t have the discipline to sit there and deal with that for weeks but I did and kept going. The next thing you know, I won my first tournament and then I kept winning and I made a little name for myself and nobody wanted to fight me in Philadelphia and I had to go to other places to get fights and I kept going working hard and started moving past people who were in the sport before me and now I’m in a good position. I’m with Al Haymon. I’m 7-0 and I’m on the rise.”

He freely admits that boxing has kept him away from street life.

“I can say, if I wasn’t boxing, I don’t know what I’d be doing,” he said. “I’d probably have a bunch of tattoos, smoking weed or in jail or on the block doing drugs or selling drugs.

“I already had nothing to do firstly before I started boxing, I thought, ‘I may as well stick with this because I’m really good at it, so why not stick with it.?'”

After his father’s time in prison, Fulton learned more about his religion and took it seriously. Fulton observed Ramadan earlier this year – it took place between June 18 and July 17 – and had a fight scheduled for June 20, it was the only day on which he didn’t fast.

Away from boxing, he likes to spend time with family, goes shopping, enjoys movies. He likes to help people and enjoys going out to eat but considers himself a home bird, otherwise. He also spends time with Hunter as well as his trainer.

His goals are to be successful: “I want a lot of belts. With the belts, the money comes and the Hall of Fame will come.”