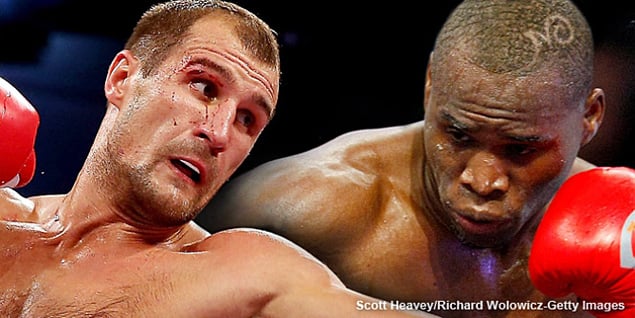 WBC light heavyweight titleholder Adonis Stevenson (27-1, 22 Knockouts) sought out Sergey Kovalev at ringside inside the Centre Videotron in Quebec City the night of the James DeGale-Lucien Bute bout. After the two best light heavyweights in the world shared a cordial moment in front of dozens of smartphone cameras, Stevenson proclaimed during the Showtime telecast that he will fight Kovalev, holder of the WBA, IBF and WBO 175-pound titles, in June rather than fighting his mandatory challenger Eleider Alvarez.

In November, the Editorial Board at THE RING voted to strip Stevenson of the magazine’s light heavyweight title for not fighting a top-five opponent in two years. Stevenson earned THE RING’s championship recognition when he knocked out Chad Dawson in one round in June of 2013. Since then, the Haitian-Canadian has defended the title (along with his WBC strap) against Tavoris Cloud, Tony Bellew, Andrzej Fonfara, Dmitry Sukhotsky, Sakio Bika and Tommy Karpency.

RingTV.com caught up with Stevenson and his business manager Rudy Louis to talk about how he deals with criticism and if a bout with Kovalev really happen in 2016.

Vladimir Lik: Adonis, on the Showtime telecast in Quebec you made it clear that you want to fight Sergey Kovalev in June. Why is June finally the right time to make this fight?

Adonis Stevenson: Because June is a good time for both of us. He has a fight with Pascal in January and I might have a fight coming up soon so I think June will work. So now we are talking about making it happen. I saw him in Quebec and I said June, he said June is good. I saw him face to face and I said “Do you want this fight to happen?” He said yes, but 50/50? I don’t have a problem with 50/50. The fans want the fight and I want the fight, so we are looking to make the fight in June.

Rudy Louis: We did see Kovalev in Quebec, but we are not the ones making the decision. The decision maker is Adonis’ manager Al Haymon. The fighters want to make the fight but the business side is the job of the promoters and managers to decide what is in the best interest of the fighters.

VL: So sounds like there are still hurdles to overcome. How confident are you the fight will happen this time?

AS: Well Kovalev said he wants to the fight to happen on HBO, but it should be the place which can pay the most money.

RL: The fighters are not business people. We are open to any network but we are not the business people. It’s up to Al Haymon and the promoter Yvon Michel. If everyone can come together to make the fight happen we have no problem with that and we will be ready.

VL: Adonis did you say you will have a fight before you fight Kovalev fight in June? When would that fight need to take place for you to be ready to go in June?

AS: I can fight in February or March. We are looking at opponents right now.

VL: The chat you and Kovalev had at ringside looked very similar to the moment Floyd Mayweather Jr. and Manny Pacquiao shared at the Miami Heat basketball game before their fight was finally made.

AS: Yes, because again we have two networks, HBO and Showtime, and they came together to make that fight so this is the same thing. The fighters want to fight but also it can’t just be on Kovalev’s terms. Look, Kovalev will never make more money than he will make by fighting me.

VL: When you look at Kovalev’s recent performances, how do you feel you match up against him?

AS: Hey look, I’m a southpaw. I know I can punch. I’m the power puncher. That’s a difference. It’s not the same fight as when Kovalev fights with Pascal or Bernard Hopkins. I know Kovalev will make a mistake and I will catch him. It will not be easy for him with me. He knows that. When you fight Adonis Stevenson you can’t prepare. You can’t prepare for my power. It’s impossible. That’s why I can knock anyone out. Whoever fights Adonis “Superman” can’t find sparring partners. Kovalev will not be prepared for the hard punches that I will throw at him.

VL: Although it was a flash knockdown, Kovalev was knocked down by Blake Caparello and he was stunned at one point by Pascal. Do those moments give you extra confidence that you can hurt him if you land your left hand?

AS: I already knew Kovalev was vulnerable before he fought Caparello. I was not surprised that his knees buckled. He will never be ready for me. If I land on Kovalev he’s going to sleep.

VL: Adonis are you disappointed the fight with Kovalev hasn’t happened yet?

VL: Why do you think Kovalev’s team didn’t want the purse bid.

VL: Is there any possibility at all this fight could land on HBO or is that out of the question for you?

AS: It’s whoever pays the most money should get the fight. We never shut the door to HBO and have nothing against HBO. We will fight on any network that gives us the best deal. Again, that’s the reason for the purse bid.

VL: Kovalev has a deal in place to fight to fight Andre Ward in the second half of 2016. Are you at all concerned that Kovalev and his team will move away from fighting you and just focus on Ward since that will be a big money fight for him?

AS: No, I am not concerned because I am the highest paid light heavyweight in the division. No one gets paid like me so if Kovalev fights Adonis Stevenson he will get paid too. I am the one who generates all the money in this division so I’m not worried about it.

VL: THE RING Magazine recently stripped you of their light heavyweight title. How did that make you feel?

AS: That’s just politics. Everyone knows RING magazine is owned by Golden Boy. This is Golden Boy’s company and everyone knows Golden Boy and Al Haymon don’t get along. Golden Boy is suing Al Haymon and my promoter Yvon Michel is suing Golden Boy so that’s why they took the belt. It simply politics between promoters so I’m not worried about that.

[Editor’s note: THE RING Editorial Board’s decision to vacate the magazine’s light heavyweight title had NOTHING to do with promoters and the various lawsuits between promoters, it had to do with Stevenson’s choice of opponents over a two-year period.]

VL: How about the criticism on social media? Does it bother you?

AS: No, not at all. The fans don’t know the business. Fans judge me and say I had an easy fight because I knock everyone out. The fans are not aware how hard a puncher I am. If you compare my opponents to Kovalev’s I have fought better competition. Nadjib Mohammedi is not a better opponent than anyone I fought.

RL: Adonis fought Tony Bellew who is much better fighter than Ismail Sillakh, so how can you compare? Adonis doesn’t care who you put in front of him he will fight anyone. Adonis is not worried about the criticism.

VL: You are 38 years old. How much is age a factor in creating urgency for you to make the Koavlev fight?

AS: No, I don’t have any problems with my age. I started boxing late and I never been hurt. I never been in wars. My body feels good and look at Hopkins and how far he fought in his forties.

VL: Tell me about the influence your trainer “Sugar” Hill has had on you since the passing of Emanuel Steward.

AS: I still keep the same mentality that I got from Emanuel Steward and you know “Sugar” Hill is the nephew and has the same training. “Sugar” is doing a fantastic job. He knows me very well and helps me and keeps me motivated.

VL: What is your prediction for the Kovalev-Pascal rematch?

AS: Well Pascal changed trainers but the problem with Pascal is he doesn’t have power. Kovalev has the power and will come into the fight more confident because he already beat him so I think Kovalev should win but in boxing you never know because one punch can change everything.

VL: After the meeting in Quebec, Kovalev put a photo of the two of you on Instagram with the caption: “When you want to punch someone but you can’tÔÇªbecause you can make millions f___ing him up in the ring.”

AS: (Laughing) it’s a joke man. It’s a joke. He thinks he can punch me in the face and I’m not going to do anything. I want to see him do that. I got respect for any fighter and I would never just punch them but I also would never let anyone punch me. It will never happen. I’m from the street. I’m from the street and I know that will never happen. This is just promotion for the fight. I don’t take it personal. I don’t think Kovalev is a bad guy but maybe he’s just frustrated. If we can make this fight it would be a blessing for everyone.