The buzz on Luis Ortiz is loud 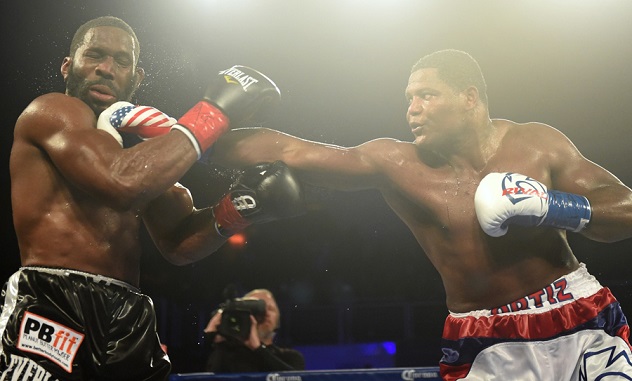 Social media is ever so useful, to alert you to what a screw-up Steve Harvey is, and to help measure just what sort of an impression a person has made on some of the interested masses with a performance.

Going in, my jury was out on the guy and we were leaning toward guilty.

Only turned pro in 2010…What all was he doing all those other years?…Does he eat, sleep, live and breathe boxing? And OK, so he rubbed out a foe (Matias Vidondo) when I saw him live, on Oct. 17. The foe wasn’t an obvious Top 50 heavyweight even…so yeah, my jury was out. And did I mention he popped positive for a PED a while back? Leaning guilty…

Saturday night, after seeing what Ortiz (24-0 with 21 knockouts; born in Cuba, lives in Florida) did to and with Bryant Jennings (19-2, has lost two straight; age 31) , my jury came back, pretty confident after deliberation.

Ortiz isn’t likely headed for the Hall of Fame but the fella can crack, and isn’t that a most useful and compelling attribute in a heavyweight?

And…have I told you he can crack?

Jennings believes; the Philly boxer, who took pride in knowing he could more than hang with the elite, as he showed against Wladimir Klitschko in a loss back in April, was on a mental ascent coming in. A lengthy camp with John David Jackson had him feeling refined and ready.

But in round one, Ortiz had Jennings feeling maybe weaker, then buzzed, confused and defensive. Right away, you saw the lefty push Jennings around, with his right forearm. “By-By” came out in aggressive mode, getting in close, in the face of the Cuban. Then a left landed and Jennings backed up a step, noting the pop. He backed up more after a left to the body, went toward the ropes, and the vet sensed some weakness. Jennings collected himself, defended OK. Then he got buzzed again, maybe off a right hand. That inability to decipher which shot hurt him speaks to Ortiz’s power because there was no obvious haymaker thrown…As the round ticked down, Jennings was on tequila legs. Would he make it to round two? He did…”Move your head,” trainer Jackson told Jennings afterward.

To round two: Jennings tried to use offense as his best defense, to start. That worked for one minute, two minutes…Jennings worked harder and though he ate a straight left late, he took the round. “Control the distance,” trainer Herman Caicedo told “The Real King Kong.”

To round three…The lefty Ortiz scored with lefts on the temple and Jennings’ synapses hiccuped. In close, Jennings wasn’t strong enough or really inclined to try and wrap Kong up, so “The Real” couldn’t stay busy inside. Ortiz’s uppercuts are truly nasty, to a guy not moving his head. Jennings was too squared up, right there for Ortiz, wasn’t using a potential mobility edge. After the round, Jackson asked Jennings to work while inside, and move to his left, away from Ortiz’s power left hand.

To round four: The action stabilized. It looked like Jennings acclimated to the Cuban’s power. He probably won that round, and it was 2-2. “You gotta use the jab and your legs,” Caicedo suggested after. Head, body, head,” Jackson told his guy.

To round five…Ortiz used the legs, and got himself some more space to operate, stretch the limbs, throw longer punches. His left hands underneath, to the body, they had to tickle Jennings’ ribs and internal organs. The Cuban was out-boxing a man who was supposed to maybe be a better athlete. Ortiz’s shift in tactics worked well; he snagged the round. Inside, you need to “let your hands go,” said Jackson to the Philly boxer. In round six, Jennings pushed the pace, and that made Ortiz work harder, and it benefited the Cuban. His lefts underneath were targeted and thudding. He can walk and chew gum, throw a punch and simultaneously move, maybe push off as he exits, get himself some safe space. Jennings, by now, was hesitant; if he committed to throwing, he’d get countered by the heavy-handed Ortiz, so it was safer to not be as busy, not take risks. He’d jab but with a “stay at bay” style, and that wasn’t going to dissuade the Cuban. The sixth was a draw round.

To round seven: Ortiz was in mover mode to start. Jennings had some luck with the right hand. Then the crumpler came…As Jennings stood there, leaned in, a right uppercut came from down under…and put him down. It was the fourth uppercut in a series, as Jennings kindly put his head on a platter for the winner. The left uppercut was the filthy one – Jennings pitched forward, face first, tried to get up, got to his knees, beat the count. Could he continue? Yes. Ortiz went back to work, with cruel precision. He grinned – in this arena, some sadistic tendencies can be valuable – then tossed a left hand to the body, and followed with a right hook. Connection, to the chin…Jennings fell into the ropes, stumbled, grimaced, ate a left, stumbled…and was saved. Ref Dick Pakozdi stepped in, halted the event, with 19 seconds to go in round seven.

Kong pounded his chest, thumped it, accentuating his ferocity and brute strength.

Replays show his seasoning pays off; in tight, he’s never nervous. His eyes don’t dart; his feet don’t stammer. He’s in his foe’s face and his eyes lock in on the target, and he analyzes, as someone who has done this many thousands of times before, where to throw. His punch placement is rock-solid; Jennings can attest to that. Oh, and that second knockdown blow? It came as Ortiz was backing up; this shows you he has mastered leverage and you need to worry about him as he comes toward you – or away from you. Doubly concerning for a foe.

Afterward, HBO’s Max Kellerman talked to Ortiz. He had the flu all week, the analyst noted, but the Cuban said he felt all good after the win. Impressive…He did this while less than 100 percent? Impressive…

And down the line, what does he want to accomplish? It’s now a new era, he said, coughing, the remnants of the flu perhaps. “I’m a clean man,” he declared, speaking to lingering mistrust after the steroid positive, and then mentioned WBC boss Deontay Wilder and RING champion Tyson Fury.

Jennings said yes, afterward; maybe he underestimated Ortiz’s pedigree, and Ortiz was the better man in Verona. The Cuban had the experience edge and it showed, he said.

I reached out to some other folks, to get some more analysis and thoughts on the Cuban. My guy Monte Barrett faced Ortiz in April 2014, in his farewell fight. Monte, what did you think of Ortiz then, and now, after he beat Jennings? “He was strong and had ring savvy,” Barrett told me, “but I took the fight on two weeks notice, so it’s hard to give a true evaluation. Plus, the next fight, he failed the test…” As was noted by the HBO crew, VADA (the Voluntary Anti-Doping Association) did stringent testing for the Ortiz-Jennings fight, so we will presume innocence now unless proven otherwise…

We are all curious what’s next for the Cuban. I asked that of Golden Boy Promotions executive Eric Gomez. “He is the WBA interim champion,” said Gomez, “so we will lobby the WBA.” Right now, Ruslan Chagaev has the WBA “lesser” heavyweight belt, and Tyson Fury owns the varsity version. Gomez indicated they’d like to progress up that ladder, to Fury (though Fury might have the strap taken back by Wladimir Klitschko when they do their rematch, date TBD). “Next really hasn’t crossed our mind honestly. He just fought Saturday.”

We heard HBO analyst Max Kellerman pre-fight Saturday, and he seemed to have a solid handle on Ortiz’s promise. He noted that Ortiz was the betting favorite, holds 350 or so amateur wins, and is a lefty. “Ortiz is THAT GUY,” he said, THAT GUY being a guy maybe to put on your avoid list. Ah, but Jennings was set to face Deontay Wilder in January, but, one of his people told me, Team Wilder chose not to go that route. So, instead, he signed on to meet the Cuban. Would Wilder have been a preferable style match for him?

Anyway, Ortiz wasn’t “Mr. Buzz Across the Board” coming in to the Saturday tangle; Fight News didn’t have him in its Top 15 and guys like Bermane Stiverne, Andy Ruiz and Lucas Browne (!) boasted being higher of Ortiz on the Fight News list. That has changed; interest gets perked when people find a guy that can crack. And in this age, in which skills pay the bills, guys, the Floyd Mayweather Jr.s, the Andre Wards, heck, even more so Manny Pacquiao of recent years, top the pound-for-pound lists, fans latch hard and fast on to a finisher. Because, that is what it is…The masses like to see a ferocity of intent from their boxers…and they saw that from Ortiz on Saturday, thus are quite keen to see more from him.

Readers, talk to me: What near-term course would you choose for Ortiz?

Just what sort of an impression has Michael Woods made on some of the interested masses with his journalistic performances? Why, one big enough to net him a website of his very own (NYFights.com) and a part in Broadway’s “Jersey Boys” (that last part is a blatant lie).