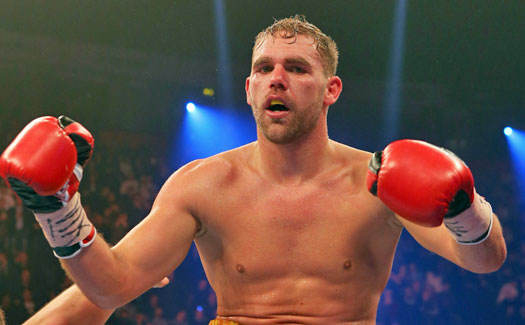 Billy Joe Saunders: I was disappointed that a potentially great fight turned out to be boring – except for one dramatic round – but that shouldn’t reflect too poorly on Saunders, who did enough to beat a quality opponent in the biggest fight of his life Saturday night in Manchester, England. Saunders (23-0, 12 knockouts) demonstrated again that he’s a very good boxer and he showed some power in Round 3, when he put Andy Lee (34-3-1, 24 KOs) down with right hands twice. He fought cautiously after that, which allowed a slightly more aggressive Lee to climb back into the fight, but the strategy (if that’s what it was) paid off: Saunders won a majority decision to take Lee’s WBO title and become a major player at 160 pounds. The official scores were 114-112 and 115-111 for Saunders and 113-113. I had it 114-112 for Saunders but 115-111 (seven rounds to five for him) was reasonable. Lee didn’t complain about the scoring afterward. Saunders might’ve been able to make a bigger statement had he taken more risks in an effort to take out Lee, which would’ve made for a more interesting fight if nothing else. He also might’ve been knocked out had he been more aggressive given Lee’s punching power. Thus, one could argue Saunders took the right approach. He didn’t thrill the fans, aside from the knockdowns, but he won an extremely important fight that will open doors for him as he moves forward. I believe Saunders has a bright future.

Luis Ortiz: Make room for Ortiz near the top of a heavyweight division that burst wide open with Tyson Fury’s stunning victory over Wladimir Klitschko last month. The former Cuban amateur star made a strong statement by stopping a determined but overmatched Bryant Jennings in the seventh round Saturday in Verona, New York. Ortiz (24-0, 21 KOs) was both too good and too strong for the Philadelphian, who was hurt in the first round and stopped after he went down from a perfect left uppercut, got up and then was unable to adequately defend himself. The dominating performance served notice to such big men as Fury, Klitschko, Deontay Wilder and Alexander Povetkin: They’d have their hands full with Ortiz, whose amateur background (reportedly more than 300 fights), size (6 feet 4 inches, around 240 pounds) and punching power stacks up well against anyone. I have a hard time getting past the fact Ortiz failed a drug test after his first-round knockout of Lateef Kayode in September of last year; that’s a stain on his otherwise impressive record. However, if he has learned his lesson, then we might’ve watched a future world champion beat up on Jennings this past Saturday at Turning Stone Resort & Casino. He’ll have to move quickly, though: Ortiz turns 37 in March.

What’s next for Saunders? He said he has dreamed of fighting Miguel Cotto, who recently lost a decision to Canelo Alvarez. That could be entertaining. I like a title-unification matchup with Daniel Jacobs, although I would favor the harder-punching Jacobs. Gennady Golovkin? I admire any man with the guts to face Triple-G but I don’t think Saunders would fare any better than Triple-G’s previous opponents. ÔÇª The setback shouldn’t hinder Lee’s career to a great degree. I’m inclined to criticize his cautious tactics but, in light of the knockdowns, it’s not difficult to understand why he chose to fight with measured aggression. And it almost worked. I’m amazed that he was not able to buzz Saunders even once – at least not significantly – but that’s probably more a testament to Saunders’ skills, quickness and resilience than any deficiency on Lee’s part. ÔÇª Jennings’ limitations seemed obvious against Ortiz. He got a late start in boxing, which means he’s still developing. He’s not a big heavyweight. And he doesn’t have a ton of power. That said, he’s a very good athlete who has learned a great deal in a relatively short time. And I believe he’s mentally strong. He’s not the type of fighter to fade away, at least not yet. ÔÇª

The Nicholas Walters–Jason Sosa decision on the Ortiz-Jennings card is hard to swallow. Walters seemed to control the action and landed the bigger, more obvious punches – clean blows to both the head and body – yet had to settle for a majority draw. I can see Sosa winning three of the 10 rounds as a result of his activity but even that is stretching things. Judge Tom Schreck actually scored it for Sosa 96-94 (six rounds to four) while the other two judges had it even. The result aside, Walters (26-0-1, 21 KOs) looked good in what appears to be his first fight as a full-fledged 130-pounder. The only question I have is about his power: He seemed to sting Sosa (18-1-4, 14 KOs) one time but really couldn’t hurt him beyond that. I don’t know whether to attribute that to Walters or Sosa. Time will tell. ÔÇª If I were Russell Peltz, Sosa’s promoter, I would be extremely pleased. His fighter emerged with a draw against an elite opponent and looked pretty good doing it even though he took up boxing only six years ago. Sosa still has a lot of room to grow in terms of skills – he was too easy to hit, for example – but he obviously is a very good athlete and extremely tough, both physically and mentally. And he’s fun to watch. I think he has a significant upside.