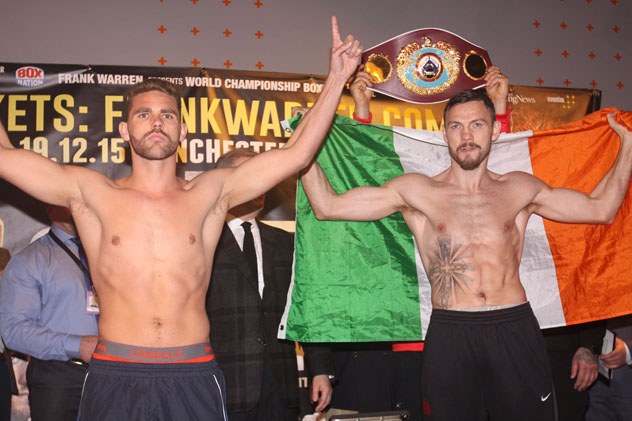 Billy Joe Saunders scored a 12-round majority decision over Andy Lee to capture the WBO middleweight title in an eagerly anticipated battle of southpaws in Manchester, England, on Saturday.

Saunders, rated No. 4 by THE RING at 160 pounds, decked Lee heavily in the third with a perfect right hook counter which hurt the champion badly. The Irishman rose bravely but was punched off his feet by another blistering flurry and Saunders was threatening to end this Anglo-Irish middleweight encounter in a hurry.

From this point, however, the bout descended into a tactical affair and, in a smart boxing posture, Lee seemed to have a razor-thin edge in the action. His problem was that he couldn’t shake the defensively adept challenger and pull back the 10-7 round which went against him in the third. The action was always tense but neither fighter was hurt again.

“I knew once I’d scored the knockdowns that the fight was mine,” said Saunders at the post-fight press conference. “I was up against it tonight but I’m a Gypsy Warrior. There’s another Gypsy Warrior on the scene (along with Tyson Fury who has given himself that nickname).

“I’ve worked hard all my life to win this belt and I beat the man tonight. I’d like to thank Frank Warren (promoter), who I’ve trusted all along with my career. I’ll have Christmas off and then I would like to take on the likes of Canelo or Cotto – I’d love those fights.”

Saunders (23-0, 12 knockouts) was a decorated amateur who served a solid six year apprenticeship in the pro ranks. Since April 2012, he has annexed British, Commonwealth and European titles and tonight’s victory has firmly established him as one of the top players on the British boxing scene in any weight class.

“Billy Joe Saunders is a better fighter than he’s given credit for,” said Frank Warren. “I don’t look at a fighters strengths, I look at their weaknesses. With Billy, some time ago, he wasn’t living the life but he’s addressed that and now he’s world champion.”

Lee has strived for years to be recognized as one of the best 160-pound fighters in the world. The gutsy Irishman overcame heartbreaking losses to Brian Vera and Julio Cesar Chavez Jr. to reach the end of the middleweight rainbow with a dramatic sixth-round stoppage of Matt Korobov to win the WBO title last year and we’re sure to hear from him again.

Saunders weighed in at 160 pounds with Lee just under the middleweight limit at 159.75.

Smith, rated No. 9 by THE RING at 154 pounds, wasn’t at his sharpest but he was clearly the superior and more powerful fighter throughout a one-sided and brutal beat down.

After boxing within himself for the first few sessions, Smith began to turn the screw in the fourth and Kelly had to give it everything to stay alive. The difference in levels was clear as the more seasoned Smith (22-0-1, 12 KOs) switched effortlessly from body to head and attacked with much more imagination.

Kelly landed the odd single shot back but the blood was pouring from his nose and a flagrant head butt in the sixth, which led to a two-point deduction, only highlighted the challenger’s growing desperation.

In Round 7, Smith was hammering home punch after punch and Kelly finally sought refuge on the canvas. No count was given, but the fight was essentially over and Smith actually yelled towards the challenger’s corner team in the hope that they would pull their man out.

The end came when Smith trapped his man against the ropes and unloaded at will. Nothing was coming back and the referee mercifully called a halt.

Smith, from Liverpool, weighed in at 154 pounds with the challenger a pound under.