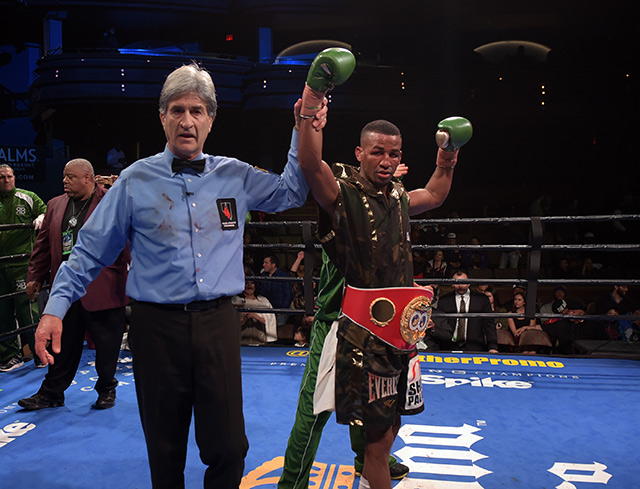 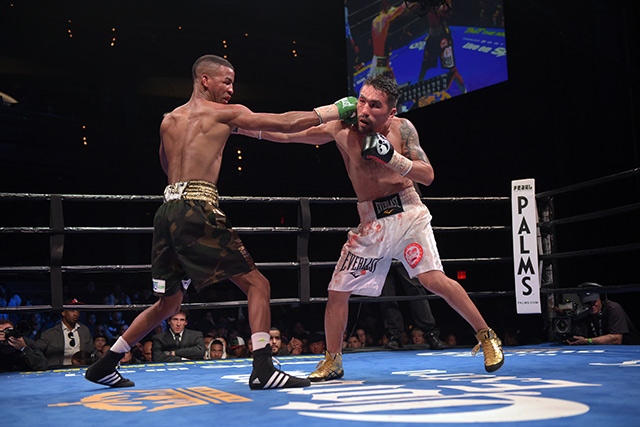 Rances Barthelemy won his second world title in a second weight class by defeating Denis Shafikov by unanimous decision in the season finale of “Premier Boxing Champions on Spike TV” from the Pearl at the Palms Resort & Casino in Las Vegas. The official scores were 119-109 and 116-112 (twice).

The bout seemed much closer than the scorecards indicated as the 30-year-old Russian managed to negate the much taller Barthelemy’s almost six-inch height advantage by fighting on the inside. Shafikov found early success by pressuring Barthelemy (24-0, 13 knockouts) into a phone-booth type fight.

The bout took a turn in the seventh round when Barthelemy opened up a cut right on Shafikov’s right eyelid. The 29-year-old Cuban defector seized on the opportunity to work the eye until the cut got nastier and nastier to the point where Shafkov’s white trunks started turning a shade of red. Barthelemy started winning rounds and boxed his way past Shafikov’s aggressive style.

With the win Barthelemy captured the vacant IBF 135-pound title which was stripped from Mickey Bey for his refusal to fight the mandatory challenger who was none other than Shafikov (36-2-1, 19 KOs). Bey fought on the undercard tonight and won a unanimous decision.

Coming off a dominant one-sided unanimous decision victory over Antonio DeMarco in June at the 140-pound limit, Barthelemy looked comfortable tonight at 135. He vacated his junior lightweight title in 2014 after only one defense because he could no longer make 130 pounds.

Shafikov, who is trained by Abel Sanchez, is now 0-2 in world title fights. He lost his previous attempt at capturing a world title against Miguel Vazquez in early 2014 in Macau, China.

The evening’s co-feature between 22-year-old hard hitting Murat Gassiev (22-0, 16 KOs) from Russia and Detroit’s Isiah Thomas (15-0, 6 KOs) ended in a no contest after referee Jay Nady called a large right from Gassiev an accidental foul because it landed after the bell to end the third round. According to the physician at ringside Thomas suffered from diminished capacity from the foul and was unable to continue. The bout was slated as a title eliminator in the cruiserweight division.

Thomas, a two-time Junior Olympic champion and one of Emanuel Steward’s last fighters, was ahead on all three judge’s scorecards but because the bout did not complete four rounds, he had to settle for a no decision.

The Sanchez-trained Gassiev was looking to land his bazooka right hand, but Thomas’ size seemed to frustrate Gassiev. The Russian finally broke threw at the end of the third round landing a giant right hand flush on Thomas sending him back into the ropes. Right after the bell sounded, Gassiev landed another straight right hand until referee Jay Nady finally got in between the fighters. Thomas looked to be hurt as he walked back to his corner and was quickly examined by the doctor.

Unknown Eric Walker (12-0, 6 KOs) defeated the previously unbeaten and highly touted prospect Chris Pearson (13-1, 10 KOs) by unanimous decision in a highly entertaining back and forth brawl. The official scores were 79-71, 80-72 and 78-74.

Walker, who spent 13 years in a Louisiana prison, came out swinging for the fences against the 25-year-old Pearson who was stunned by Walker’s work rate. According to CompuBox, Walker threw 787 total punches more than doubling Pearson’s 364 total thrown punches.

In several moments of Rounds 4 and 7, Pearson appeared to be out on his feet but Walker was just unable to put him away. Pearson managed to forge small rallies to get back into fight but Walker would be undeterred in outlasting and outgunning Pearson. According to Walker’s website he took up boxing while incarcerated at the Dixon Correctional Institute in Louisiana and amassed a record of 58-1 before being released.

In the opening bout of the Spike TV telecast, 21-year-old Mayweather Promotions prodigy Gervonta Davis (14-0, 13 KOs) defeated Luis Sanchez (17-5-1, 5 KOs) by a devastating ninth-round knockout. The official time of the stoppage was 2:05.

The southpaw Davis went past the sixth round for just the first time in his young career and was tested often Mexican Sanchez who landed uppercuts at will. Davis flashed signs of brilliance with a blistering quick left hand that found the mark on Sanchez.

Davis finally managed to drop Sanchez in Round 8 with a series of back to back left handed uppercuts. Sanchez got back up on his feet and just barely survived the round even though referee Kenny Bayless was inching closer to stopping the bout. In Round 9, Davis stalked Sanchez around the ring knowing the end may be near and landed a perfectly places left hook direct on Sanchez’ nose sending him down face first onto the canvas. Bayless started the count but decided to waive the fight off when Sanchez made no attempt to get up and was covering his badly bloody nose with his gloves.

In addition to listening to his own corner, Davis received plenty of advice from Mayweather who left his seat at ringside to run up to the ring after the fifth round yelling at Davis “You’ve had enough rounds.”