Marquez and Concepcion to meet one last time in Panama 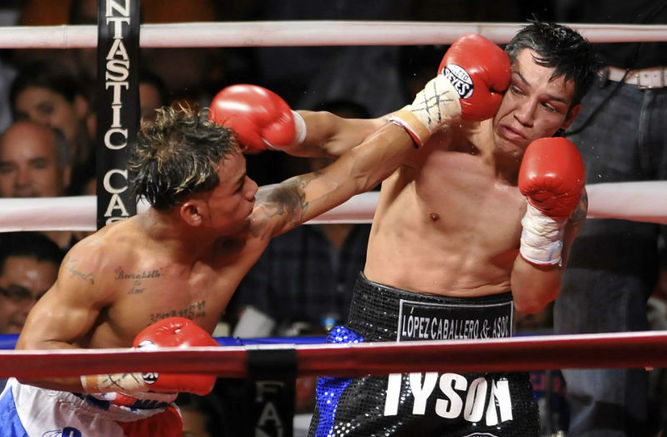 One would think that after losing a major title and a subsequent rematch to the fighter who defeated him for said belt, a current titlist would avoid a third meeting like the plague. But that was four years ago and this is now for Luis Concepcion. The former flyweight titlist will face Hernan “Tyson” Marquez on Thursday as part of the WBA’s “KO to Drugs” card to be held during the sanctioning body’s annual convention in Panama’s Arena Roberto Duran.

Concepcion (33-4, 24 knockouts) had planned to face former RING junior flyweight champion Giovani Segura in a homecoming bout in front of current and former champions visiting the country for the convention, along with dozens of officials and promoters. But Segura canceled his appearance less than 10 days before the fight and Marquez (39-6-1, 28 knockouts) was brought in as the last-minute replacement.

In spite of having bested Concepcion twice in title bouts, both fighters are facing completely different moments in their careers, with Concepcion looking strong and going 10-1, since his second loss to Marquez in Oct. 2011, and Marquez attempting to stay above .500 in this fight after going a dismal 5-4-1 in his last 10 bouts.

A victory over Marquez would give the fan-friendly “Nica” the satisfaction of beating one of his sworn enemies but Mexico’s Marquez found his own sweet way of cheating Concepcion out of the pleasure of revenge by showing up more than one pound overweight, which would mean only Concepcion will be able to hold on to a bogus WBA belt at play (not recognized by THE RING). Both fighters showed up with severe weight issues for their first attempt but only Concepcion was able to trim down his weight in the two hours allowed to make the 115-pound limit.

Still, Concepcion relishes the chance to get it right against one of his toughest foes ever.

“He beat me twice but four years have passed and I got more experience now,” said Concepcion, 30, in a recent interview with Mexican news agency NotiMex. “The first time I was out of shape, partying and doing crazy things but now I am prepared and this will be a factor. He won’t catch me out of shape again. I will listen to my corner now.”

On the undercard, former multi-division titleholder Shane Mosley will face Patrick Lopez in a junior middleweight 10-rounder and Jezreel Corrales will face Juan Antonio Rodriguez in a junior lightweight 12-rounder.