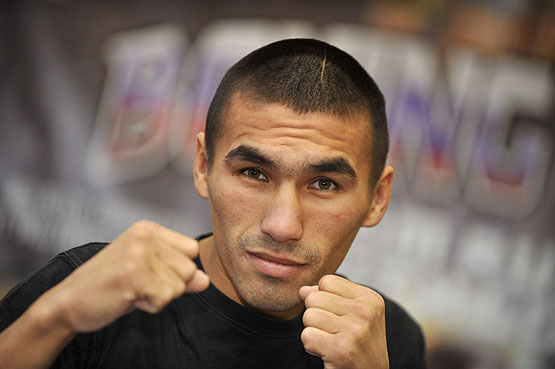 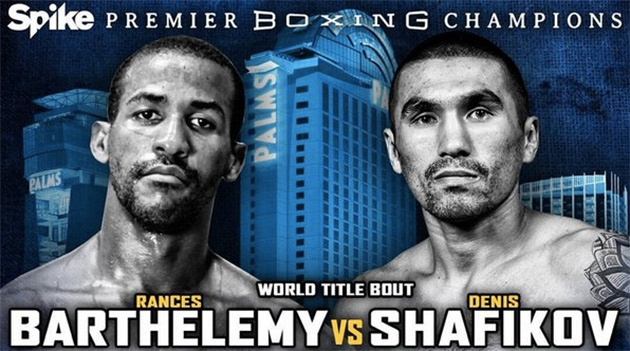 Russian lightweight contender Denis Shafikov will get a second shot at a world title as he takes on undefeated Rances Barthelemy for the vacant IBF lightweight title on Friday night. The bout will headline a Premier Boxing Champions card on Spike TV live from The Palms in Las Vegas.

Shafikov (36-1-1, 19 knockouts), a charge of renowned trainer Abel Sanchez, has won his last three bouts after dropping a 12-round unanimous decision to Miguel Vasquez in Macau in February of 2014.

“On Friday everyone will see how far I have come since that defeat,” Shafikov told RingTV.com earlier today. “This fight is for a world championship and this is what I train for daily.”

Sanchez has seen growth in his southpaw from Miass, Russia and the loss to Vazquez only fueled the fire for Shafikov to ensure he is both mentally and physically prepared for this bout.

“Denis learned not to ever take anyone lightly again,” Sanchez said. “You can’t just prepare physically and expect to win. The fight can get away from you and all of a sudden you realize you didn’t do enough to win. He will never let that happen again.”

Shafikov will need to be at his best on Friday when gives up six inches in height to Barthelemy (23-0, 13 KOs), but Sanchez said they will not allow the Cuban fighter to his length to his advantage.

“I coach my guys to be prepared whether their opponent is 5-foot-9 or 6-foot-9,” Sanchez said. “They will need to adjust to us and what we bring to the fight. In this camp we brought in six-foot welterweight Maurice Hooker and other taller guys.”

Barthelemy has looked sharp since knocking out Algenis Mendez to win the IBF junior lightweight title in 2014 and is coming off a dominant performance over Antonio DeMarco in June.

“People can say what they want about him and his accomplishments,” Shafikov said. “Believe me when we get inside the ring on Friday everyone will see the outcome.”

“Denis is chomping at the bit and ready to go,” Sanchez said. “He deserves another shot at the title and he will win it this time.” 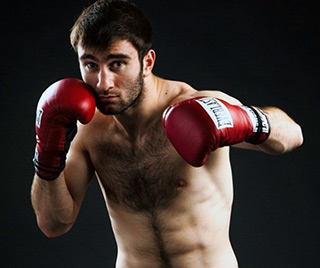 While Gassiev is a bruising knockout artist looking to FastTrack his way to a world title bout, Thomas is a two-time Junior Olympic National Champion who had over 100 amateur bouts to only 29 for Gassiev.

“It makes no difference for me even if he had 1,000 amateur fights,” Gassiev said. “Professional boxing is completely different. Everything is different.”

Sanchez agrees with his fighter that Thomas’ extensive amateur pedigree will not be a factor in the bout.

“The school Murat came from in Russia prepared him well for the professional game,” Sanchez said. “He accomplished as much in his 29 amateur fights as other guys have done in 150 fights. I don’t need a guy who can fight 3 rounds. I need a guy who can be developed and he has accelerated very well in a short time.”

Gassiev credits Sanchez with instilling in him the confidence to compete on the highest level of the sport and is humbled by the fact that his trainer compares him to stablemate Gennady Golovkin.

“Abel believes in me and that brings me great motivation, Gassiev said. “If he compares me to a boxer as accomplished and skilled as Golovkin that means he sees something in me. My job to train hard and do the best I can to not let him down.”

Sanchez puts as much stock in a boxer’s character as much as their physical skills. That becomes the overriding factor on whether he will take on a fighter.

“I can work on a fighter’s skill set but I can’t help them with their character,” Sanchez said. “With the foundation Murat came to me with I see a lot of similarities with Gennady and he’s still a growing boy.”

Sanchez believes Gassiev will make the move up to heavyweight in a few years when he puts on some more weight on his 6-foot-4 frame.

This bout replaced the previously scheduled co-main event between Beibut Shumenov and Krzystoff Wlodarczyk. Shumenov was forced to withdraw due to an eye injury.