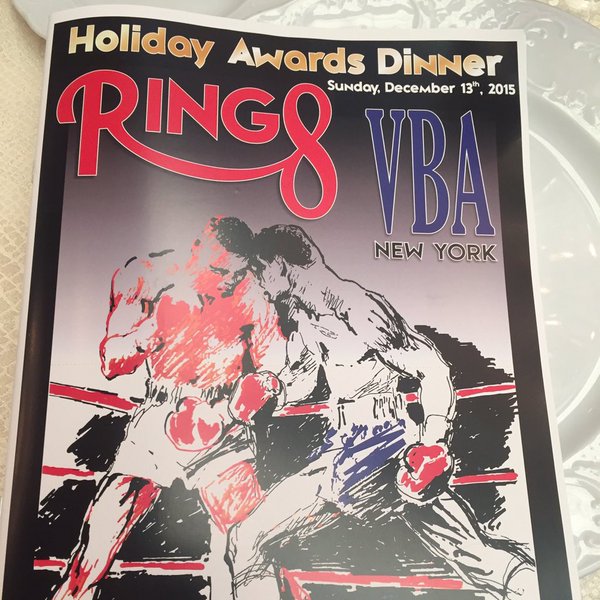 This is supposed to be, ideally, the time of the year when we are focusing more than we typically do on what we are grateful for. But the news thrown in our face is most often of the “bad” variety, which can make it hard to get into a mode in which one is counting blessings.

But I saw and heard a great deal of that on Sunday, at the Ring 8 Veteran Boxers Association Annual Awards gala in New York.

Heather Hardy received the Female Fighter of the Year Award from the organization, now in its 62nd year of applauding the deeds and legacies of retired hitters. The Brooklyn-based boxer, who upped her record to 15-0 at Barclays Center on Dec. 5, took to the mic at Russo’s on the Bay and thanked persons who deserved pats on the back, for helping her to get where she is, that being one of the most prominent female pugilists on the planet. And then a lady, whom her promoter describes as the female version of Micky Ward, a role model of toughness and perseverance for any soul who’s had their teeth kicked in by cruel fate – man, fate has a helluva a roundhouse kick – a time or two showed a soft and sweet side which helped me feel some holiday spirit.

“I’d like to thank my coach, Devon Cormack,” she said, pausing, collecting herself, trying to will it so her eye makeup wouldn’t get ruined. “He’s everything to me, my coach, my mentor, my best friend, my partner. Not just a guy who comes into the gym at five in the morning to teach me how to box but someone who always made sure my lights stayed on. And would bring my daughter juice boxes for school…This is a guy who pushes me to be better, and believes in me, even when I don’t. I love you and I can’t imagine doing this without you. This award is for you.” And then the eye makeup started getting wrecked…

WBO welterweight champion Tim Bradley received the Ring 8 Fighter of the Year Award, as proud trainer Teddy Atlas beamed from 25 yards away, and he too gave a speech perfectly attuned to the time of the year. The 32-year-old spoke of a low point in his career and life. It was 2008, a lousy year economically for a lot of folks. “2008, my wife and I came home from a dinner and what was posted to the door changed our life, changed my life. It was a 30-day notice that we were to be evicted from our home,” he said, while Ring 8 President Bob Duffy nodded somberly.

Bradley had a fight set but that scrap, against Jose Luis Castillo, was canceled because the Mexican didn’t make weight. Bradley was broke after paying for his camp. He soldiered on, though, scrapped some dough together, and kept training, and managed to keep a roof over the family’s heads in the meantime. A title shot opportunity appeared against Junior Witter, a slick Brit, in England. Bradley was supposed to give a decent account himself on May 10, 2008 but head home with an L. His missus, Monica, was supposed to stay in California but surprised the fighter by showing up in England. She spent the last $350 in their bank account to fly to England, to offer moral support in Nottingham, where Bradley won by a split decision. “We had actually $11 in our bank account,” he recalled. “I couldn’t be denied. I had to get the job done. And I did get the job done. And so every fight I go into, I always have that memory in my mind, that $11 in my account, not being able to feed my family, not being able to take care of my family, and that’s what keeps me determined to fight hard, every single time out. And I take none of this for granted; I don’t even take this award for granted. I appreciate this award a great deal!”

A similar theme was served up by Melvina Lathan, former chair of the New York State Athletic Commission, who won the Woman of the Decade Award from Ring 8. She held it together well enough to get through a speech, which managed to also remind us of some of the best aspects of the sport and that, so often, boxing people serve as family to some folks who maybe don’t have blood ties close and dear to them. She asked staff that served with and for her, the refs, the judges, to take a bow, and said, “Without you, I wouldn’t be here. Just like, without my parents, I wouldn’t be here. I am the me that they made and I am very blessed and I thank you all and I love you all. God bless you and have a lovely, lovely holiday! How good can it get? Thank you, everyone; God bless you all.”

The gala featured loads of such sentiment. Not often enough do people get those earned awards and plaques and pats on the back. You eff up; you will hear about it, from the boss or a loved one but the day-to-day successes, the wins, the efforts which might seem small but are actually damned heroic, we all need to try and play those up more. Negative sells; negative draws clicks. Upbeat is “boring” and lacks sizzle. But to hell with that. Today, as I saw at that Ring 8 gala, make sure to stay stuck in a moment of gratitude, take note of what you have and let some of that holiday spirit seep into your soul. Let the Grinch be your spirit guide.

“May your juice boxes be full and your gratitude have lots of attitude,” read Woodsy’s 2015 Christmas cards. They were deeply discounted; whaddya gonna do…