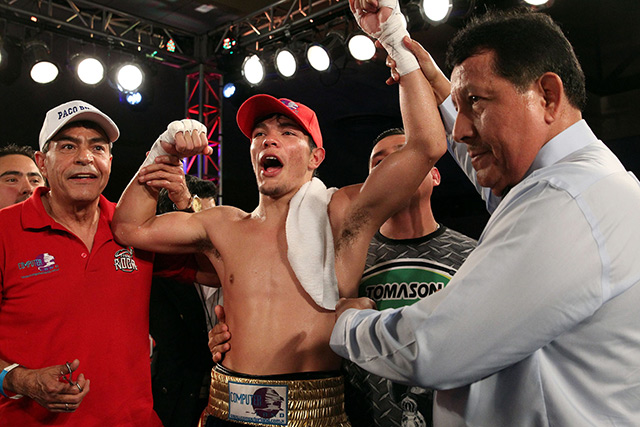 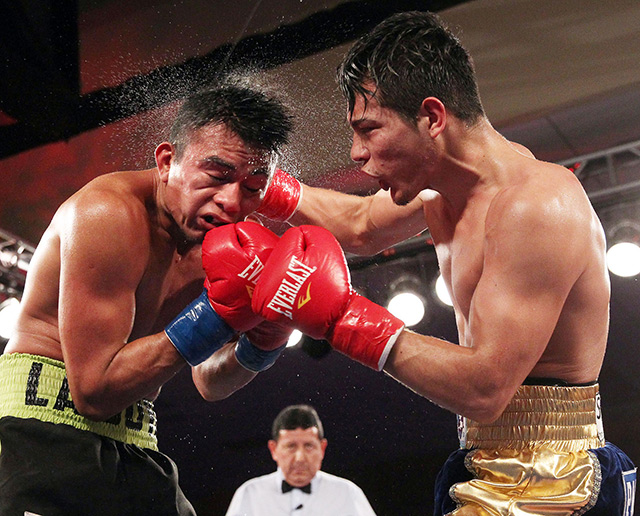 GLENDALE, Calif. – The United States debut of Pedro Campa on Saturday night was a successful one.
Campa won a workmanlike 10 round unanimous decision over Aaron Herrera before a sold-out crowd at the Civic Auditorium.
With the win, Campa improved to 19-0, 14 knockouts, while Herrera falls to 21-4-1, 12 KOs.
After the opening bell, it was all Campa. The fighter from Hermosillo, Sonora, Mexico was able to outland and outbox Herrera during most of the exchanges. Campa mostly worked from the center of the ring, using effective lateral movement to get on the inside of Herrera’s guard and landing to the head and body.
Herrera never found a rhythm during the fight, and nothing he tried to seem to work as the bout progressed into the later rounds.
Campa was more dominant with each passing round. There were times in the later rounds when he looked as though he tried to stop Herrera, but Herrera was able to hold on or land a punch to throw off Campa.
All three judges scored the bout in favor of Campa, 100-90, 100-90, and 98-92.
Campa is promoted by Zanfer Promotions.
Barrera stops Murat
Unbeaten Sullivan Barrera stopped Karo Murat in the fifth round, becoming the mandatory challenger for IBF light heavyweight world titleholder Sergey Kovalev.
With the win, Barrera improves to 17-0, 12 KOs, while Murat drops to 27-3-1, 17 KOs.
It was an even fight during the first two rounds, as both fighters were able to connect inside the pocket. Murat, who had only lost to Bernard Hopkins and Nathan Cleverly prior to his bout against Barrera, looked to land with right hands to the head of Barrera.
As the bout progressed, Barrera’s punches began to land more frequently. He increased his aggression, allowing him to walk Murat down during a majority of exchanges.
At the end of the fourth round, Barrera landed a right-left combination to the head, dropping Murat to the canvas. Murat got up on wobbly legs and was able to walk back to his corner. Barrera pounced on Murat at the beginning of the fifth round, landing a right hand to the head, stunning Murat. Barrera followed up with a barrage of punches, prompting referee Wayne Hedgepeth to stop the bout at 25 seconds.
Some questioned the stoppage of the fight, including Murat, who stood in the middle of the ring with outstretched arms.
Magomedov overwhelms Tavira
In the opening bout of the HBO Latino broadcast, middleweight Arif Magomedov stopped Jonathan Tavira in the seventh round.
Magomedov goes to 17-0, 10 KOs, while Tavira drops to 12-4, 9 KOs.
From the opening bell, Magomedov put Tavira on the defensive, backing him up against the ropes. The fighter from Russia landed consistently with right hands to the head of Tavira.
Anytime the southpaw Tavira attempted to mount an offense, Magomedov snuffed that rally out by repeatedly tagging to the head with more right hands. By the third round, Magomedov began landing left hooks flush to the head of Tavira.
The onslaught continued into the middle rounds. Magomedov dropped Tavira with a counter right cross to the head midway through the fourth round. Tavira made it out of the round, even rallying with a series of combinations in the fifth round.
Referee Zac Young deducted a point from Magomedov in round seven for repeatedly holding Tavira’s head down, but the onslaught continued into the later rounds. Magomedov ended matters in round seven, dropping Tavira with a barrage of punches. Tavira stood up, but Young ended matters at 55 seconds.
Non-televised action
– Fringe welterweight contender Francisco Santana (23-4-1, 12 KOs) stopped Armen Ovsepyan in the sixth round. Santana’s punching power and accuracy began to wear Ovsepyan down throughout the bout. A left hook from Santana shook Ovsepyan (14-6, 11 KOs), prompting Ovsepyan’s corner to throw in the towel. Time of the knockout was 2:37.
– Hard-hitting welterweight Egidijus Kavaliauskas (11-0, 10 KOs) stopped Pablo Munguia in the second round. Kavaliauskas hurt, then eventually dropped Munguia (21-10-1, 12 KOs) to the canvas, prompting referee Raul Caiz, Sr. to stop the bout at 1:10.
– Welterweight Arnold Barboza (9-0, 3 KOs) stopped Rony Alvarado (9-6, 5 KOs) in the sixth and final round. Time of the stoppage was 1:23.
– Junior middleweight Aleksandr Besputin stopped Fernando Palizo (4-2, 4 KOs) at the end of the second round. A barrage of punches dropped Palizo to the canvas, prompting referee Sharon Sands to stop the bout at 2:59. Besputin was making his pro debut.
– In the opening bout, junior middleweight Konstantin Kupianskii, who was making his pro debut, won a one-sided four round decision over Reggie Young (0-2). All three judges scored the bout 40-36 in favor of Kupianskii.
Francisco A. Salazar has written for RingTV since October of 2013 and has covered boxing in Southern California and abroad since 2000. Francisco also covers boxing for the Ventura County (CA) Star newspaper, Boxingscene.com, and Knockout Nation. He can be reached by email at [email protected] or on Twitter at FSalazarBoxing