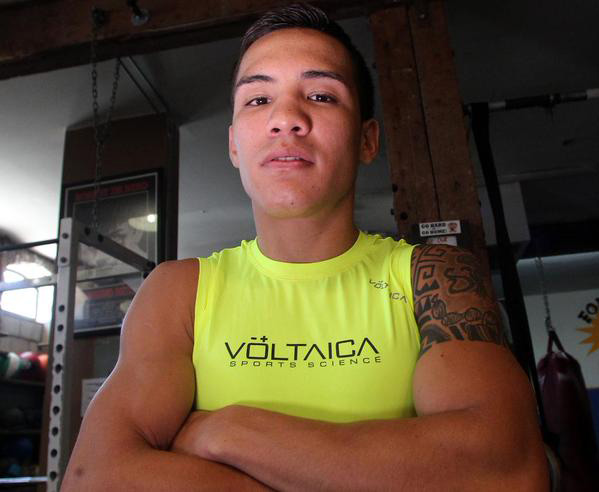 TUCSON, Ariz. – There were cheers for Oscar Valdez. For Jose Benavidez Jr., there were only boos.

It was the tale of two performances Saturday night at Tucson Community Center. It was also a defining example of what fans want to see. It starts with knockouts. It ends with them.

Valdez delivered a huge one.

The two-time Mexican Olympian, returned to his boyhood home and brought an estimated crowd of more than 3,000 to its feet by sending Filipino Ernie Sanchez to the canvas with a beautiful left hook for a dramatic, third-round TKO.

“A sweet shot,” said Valdez (18-0, 16 KOs), who did exactly what was necessary for him to be in the middle of the featherweight division’s championship mix in 2016. “I felt it travel up from my knuckle all the way up to my shoulder.”

A brave Sanchez (15-7-1, 6 KOs) somehow managed to get up. But his feet were unsteady. His eyes were vacant. He stumbled one way. Then, another. He was out on his feet. Referee Wes Melton rushed in with a timely stoppage at 59 seconds of the round.

Consider it the end of a Valdez beginning.

“I’ll fight anybody in my division who has a belt,” he said after a victory with a powerful message. To wit:

Just about anybody will face a very tough challenge against him.

For Benavidez, the night proved to be more of mixed message. He won, scoring a unanimous decision over Sidney Siqueira. He remained unbeaten (24-0, 16 KOs). He didn’t lose anything, other than some popularity.

During the late rounds and after the scores were announced, the crowd booed. It expected dominance from the Phoenix fighter, a WBA junior-welterweight champion. It didn’t get it, at least not until the 10th and final round when Benavidez dropped Siqueira with a right to the body and sent crashing into a neutral corner with a left.

But it does pay the bills.

Benavidez, who said he battled the flu a week ago and was more than four pounds heavier than the contracted weight on Friday, looked less than sharp.

“I was definitely not 100 percent,” said the Phoenix fighter, who agreed to pay Siqueira $2,000 for coming in heavier than the mandated 148 pounds. “I don’t want to make excuses. I also understand that the crowd didn’t understand I’d been sick for the last week. I felt fast, but I just didn’t have my usual power.

“If I had been my usual self, I would have knocked out this guy in three to four rounds.

Benavidez came away with the victory, scoring a unanimous decision. There was no doubt in the 100-90, 99-91, 100-90 scores, all one-sided and in favor of Benavidez, whose title was not at stake

But questions were attached to it. You could hear them in the boos from fans restless for the stoppage that Valdez would later deliver. Sigueira was undersized and unknown. He had fought and lost a bout for a lightweight title in his native Brazil in his last outing.

“It was learning experience,” said Benavidez, who hopes to use the lessons in his next bout.

He was asked if he still hoped reigning Fighter of the Year Terence Crawford.

He didn’t lose any confidence either.

Notes From The Undercard

Super-middleweight prospect Jesse Hart (19-0, 16 KOs) of Philadelphia started the show with a quick finish. In an empty arena, Andrik Saralegui of Tijuana was one of the few people to take a seat. Actually, Saralegui (19-4, 15 KOs) was put there, first by an immediate blitz of about five punches from Hart and then an uppercut to the body that ended it 54 seconds after opening bell.

Brazilian middleweight Esquiva Falcao (12-0, 9 KOs), a silver medalist the London Olympics, encountered some early trouble with Hector Munoz’ early aggressiveness. But a Falcao left knocked down Munoz (22-13-1, 14 KOs), a well-traveled Albuquerque fighter.. In the fourth, a quick succession of Falcao punches landed, prompting ref Wes Melton to stop it at 2:26 of the round.

Super-lightweight Luis Ramos (25-3, 10 KOs) was introduced as the wrong fighter by the ring announcer in the initial intros. The announcer got it corrected. Then, Ramos, of Santa Ana, Calif., made sure there was no mistaken identity in asserting himself with power in both hands for a one-sided decision over Moises Delgadillo (17-13-2, 8 KOs) of Guadalajara.