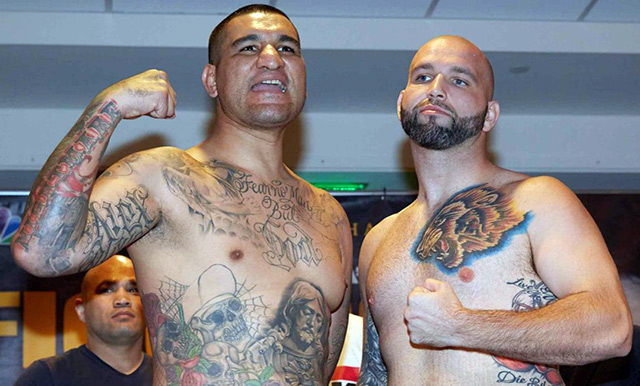 Former two-time heavyweight title challenger Chris Arreola got up from a third-round knockdown to narrowly outpoint Travis Kauffman via split decision in a brisk 12-round bout on Saturday in San Antonio.

Arreola got up and rallied against his game former sparring partner in Rounds 4, 5 and 6, but Kauffman stepped up his pressure and body attack mid-way through the NBC-televised fight and was able to back the gutsy Southern Californian to the ropes in Rounds 7, 8 and 9.

Just when it seemed like the 30-year-old Reading, Pennsylvania native would outwork and overwhelm Arreola to a decision or late-rounds stoppage, the former top-10 contender recaptured his form and began connecting with sharp jabs and hard straight rights in Rounds 10 and 11.

Both heavyweights were slow and sloppy by the final round but both emptied their tanks to the delight of the fans inside the AT&T Center.

It was a tougher-than-expected fight for the 25-year-old Texas native, who weighed in at a ridiculously heavy 151 pounds for what was supposed to be a junior welterweight bout, but his youth, size and relentless workrate was not enough to overwhelm the supposedly faded 29-year-old veteran from Mexico.

However, the Tijuana resident came to fight against Figueroa. He couldn’t keep from being outworked by an opponent who averaged more than 100 punches per round, but he landed hard, clean counter shots as he was backed to the ropes. Both fighters faces were marked up and swollen going into the late rounds.

By the championship rounds, DeMarco was the stronger of the two. The veteran, who had been in hard fights with quality boxers such as Edwin Valero, Adrian Broner and Jorge Linares, hurt Figueroa early in Round 11. DeMarco landed the cleaner power punches in the final round. Figueroa remained game but no longer had the physical strength to push around the older man. In fact, it was Figueroa that was forced to the ropes in the final seconds of Round 12.

The bold stand was a moral victory for DeMarco and hopefully a wake up call for Figueroa, who also missed weight in his previous bout (against Ricky Burns). His volume punching and warrior spirit has carried him to this point in his career but it won’t be enough going forward.