The Sinatras and boxing 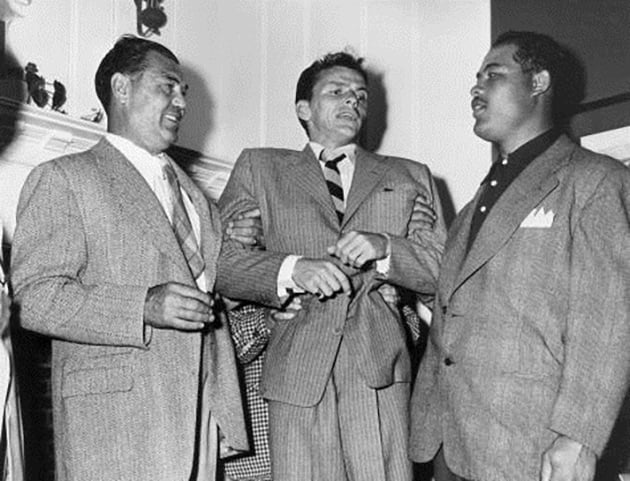 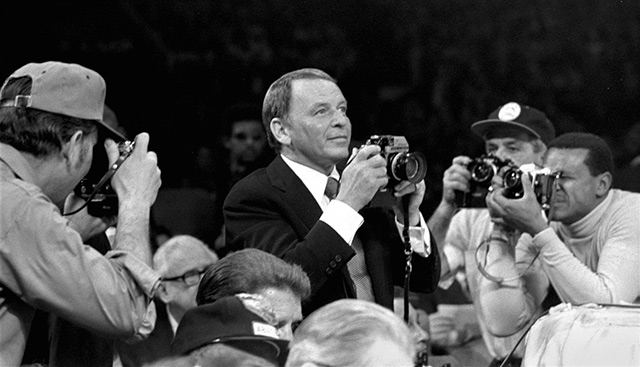 Frank Sinatra was a boxing fan.

At various times, he was involved in the business end of the sport, owning a piece of heavyweight Tami Mauriello and participating in the promotion of the 1947 bout between Jersey Joe Walcott and Joey Maxim. He was a regular at ringside for big fights and gave generously to Joe Louis when Louis fell on hard times.

Like much of America, Sinatra initially castigated Muhammad Ali and later embraced him. More notably, he was in the press section for the March 8, 1971 “Fight of the Century” between Ali and Joe Frazier.

John Condon (director of publicity for Madison Square Garden Boxing) later recalled, “All day long, the Garden was a madhouse. During the afternoon, I heard one of our security guys saying Frank Sinatra was going to be in the first row of the press section. I said, ‘Joe’ – that was the guy’s name – I said, ‘There’s no way in the world Sinatra is going to be in the working press tonight. Get it out of your mind now and please don’t embarrass him or me, because if he’s there, he’s going to get thrown out.'”

“That night,” Condon continued, “the Garden was like a combination of New Year’s Eve and the Easter Parade. I don’t think there’s ever been a night like it. It was one of those evenings where everybody who was anybody was there. I look in the press section and I see Sinatra. I’d just finished kicking out Dustin Hoffman and Diana Ross. So I went over to throw Sinatra out. And just as I got to him, one of the ABC cameramen said, ‘He’s got one of our tickets.’ That meant I couldn’t do anything about it. As long as he had a press ticket, he was entitled to be there.”

Not only was Sinatra there, he had a camera. One of his photos was on the cover of the next issue of Life magazine. 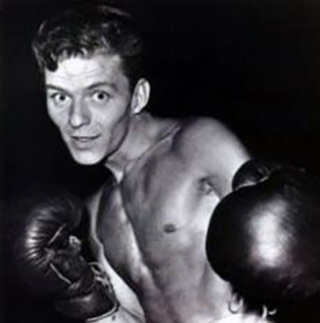 Sinatra often postured as a tough guy, but he wasn’t much of a fighter. In 1967, Carl Cohen (an executive vice president at the Sands Hotel and Casino in Las Vegas) removed the caps from two of Old Blue Eyes’ front teeth with his fist when Sinatra became too abusive for Cohen’s taste. In a less-adoring world, the singer might have become known as “Old Black-and-Blue Eyes.”

The real fighter in Sinatra’s family was his father.

Antonino Martino Sinatra was born in Sicily on May 4, 1894. He came to the United States in 1903 and apprenticed as a shoemaker before deciding to try his hand at boxing. Because of a prevailing prejudice against Italian-American fighters, he fought under the name Marty O’Brien.

“O’Brien’s” first pro fight was a fifth-round knockout loss on January 6, 1911, at the hands of an 0-and-1 fighter named Bull Anderson at the Bedford Athletic Club in Brooklyn. Six weeks later, he was stopped in the third round by Hugh Ross.

After a five-month lay-off, Sinatra (a/k/a O’Brien) returned to the ring on July 5, 1911, to face Mickey Cashman, who was making his pro debt. One day later, a headline in the New York Times blared, “Knockout at Longacre: Mickey Cashman Puts Marty O’Brien Away In Forty-five Seconds.”

The article read as follows: “The principal attraction last night at the Longacre Athletic Association furnished one of the quickest knockouts ever seen at the club, when Mickey Cashman of the Hamilton Athletic Club put Marty O’Brien of Hoboken away with a right hander on the jaw after forty-five seconds of fighting, which had the New Jersey lad on ‘Queer Street’ for fully fifteen minutes. The boys had only shaped up when O’Brien rushed his opponent to the ropes, putting over a straight jab to the face. Cashman rebounded and walloped his man with a right on the jaw, which put him down for the count of nine. They had barely got into action again when, once more, Cashman made a feint with his left and shot his right across with force enough to drop him and open a gash in O’Brien’s mouth with the result that he bled profusely.” 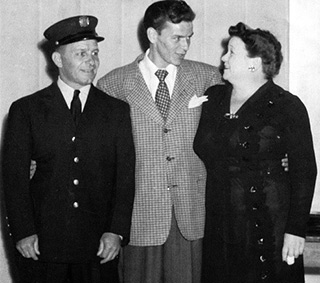 Frank Sinatra with his parents.

Nine months later, Sinatra was in the ring again, losing a decision to Mike Rosen at St. Nicholas Arena in New York. That brought his record to 0-and-4. There was another layoff, this one lasting twenty months. Then, in January 1914, Sinatra fought Young Sieger twice within the span of two weeks at Brown’s Gym in New York. He was knocked out in the first of those bouts, but won the second on an eighth-round disqualification.

That disqualification was the first and last victory of Sinatra’s ring career. On Valentines Day 1914, he eloped with Natalie Garaventa. On December 15, 1915, their only child, Francis Albert Sinatra, was born.

In 1920, needing money, “Marty O’Brien” returned to the ring after a six-year absence. He lost twice more and retired for good in 1921 with a record of 1 win against 7 losses with 5 KO’s by.