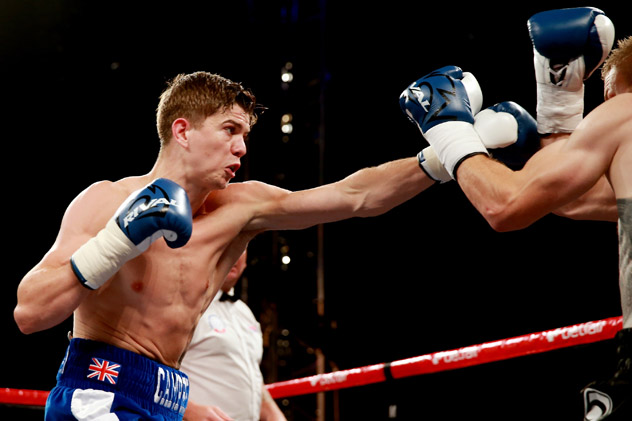 Olympic gold medalist Luke Campbell was sensationally floored for the first time in his professional career and dropped a 12-round split decision to Frenchman Yvan Mendy in London, England, on Saturday.

The visitor caught southpaw Campbell (12-1, 10 knockouts) with a precise left hook in the fifth and although feet momentarily collided, it was correctly ruled a knockdown. Head snapping punches had caught the Englishman before he hit the deck and continued to land afterwards.

“I feel that I won the fight,” said a bitterly disappointed Campbell, a lightweight prospect who represented Great Britain at the 2012 London Games. “I was catching him a lot and although I took the odd punch back, it was always after I landed a combination. I’ll go back to the gym, work harder and look to improve. I have no excuses and congratulations to Mendy.”

Mendy (33-4-1, 16 KOs) simply walked through Campbell’s shots and refused to take a backward step. The Frenchman was not deterred by the lefty stance and consistently threaded home an accurate right lead and his timing on the left hook over Campbell’s jab was also very impressive.

Campbell did have success with rapid clusters to head and body but a lot of his work hit the guard and all the quality shots came from Mendy.

The 35-year-old veteran got off to a terrific start, bossing the majority of the early sessions with quick accurate punching and ring generalship. Moscatiello appeared frustrated at his inability to pin down the elusive ex-champion, although he did land some eye-catching shots of his own.

The victory sees “The Magic Man” claim the European Union welterweight title. His original opponent, Gianluca Branco, the genuine European champion, pulled out of a contest against him last week.

The action was barely worth watching over the first two sessions as Chisora teasingly touched the target whenever the moment moved him. In Round 3, at the behest of his corner, the Londoner upped the pace and floored his hapless opponent with a volley of power shots which prompted the referee to halt the action.