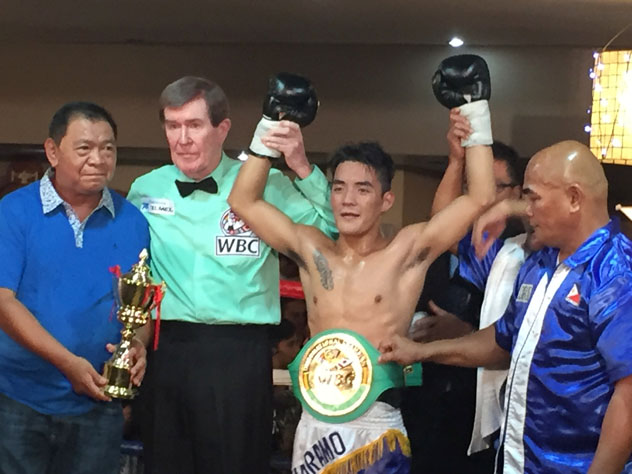 Giemel Magramo celebrates after his victory over Jeny Boy Boca on Dec. 12, 2015. (Photo by Ryan Songalia)

Magramo (15-0, 12 knockouts) comes from a family of tough fighters. His dad, Melvin Magramo, was a bulldog of a fighter who gave a young Manny Pacquiao a tough test in a 10-round decision loss, while his uncle Ric Magramo counts Gerry Penalosa among his rivals during the ’80s and ’90s.

The 21-year-old “Pistolero” Magramo showed he could bring the heat from the opening bell, forcing Boca (10-3, 10 knockouts) to the ropes early. Boca seemed unable to handle the pressure, missing wildly with wide counterpunch attempts while Magramo strung combinations together effortlessly.

The end came in Round 6 when a left hook to the body froze Boca’s legs, leaving him vulnerable to 20 unanswered punches from Magramo along the ropes.

Johnny Elorde, who promotes Magramo and also handled the careers of his father and uncle, says he anticipates a top 15 ranking for Magramo after winning the WBC International flyweight title.

“We’ll wait for his rating first and then we’ll talk about it,” said Elorde when asked about Magramo’s next move. 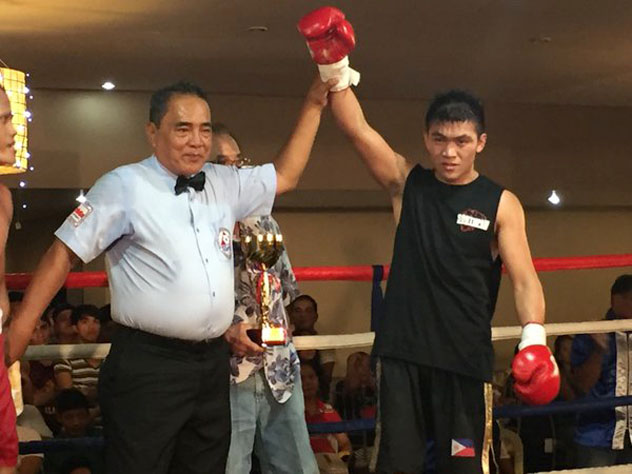 Juan Miguel Elorde scored knockdowns in Rounds 1 and 2 before knocking out the mononymous Rasmanudin with a right hand near the end of Round 4 of the junior lightweight match.

Rasmanudin immediately grasped at his head and collapsed, prompting the referee to halt the fight.

There were no knockdowns in the fight as the awkward Suro, who spent as much time inviting the crowd’s cheers as he did punching, was content to throw a slapping punch here and there while being mindful of the southpaw right hooks of the 31-year-old Elorde.

“I had to adjust my style because he’s always coming forward with his head, so I couldn’t put my punches together,” said Bai Elorde (19-1-1, 8 KOs).

The Elorde brothers attract a big crowd of supporters at their grandfather’s legacy building, but the two hold degrees in Hotel and Restaurant Management from De La Salle-College of St. Benilde and have done well to invest in businesses outside of the ring, like the Southpaw Bar and Grill, which opens Dec. 18 next to the complex.