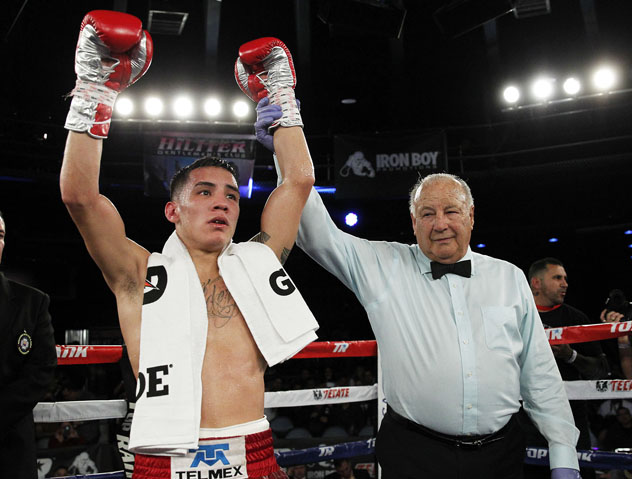 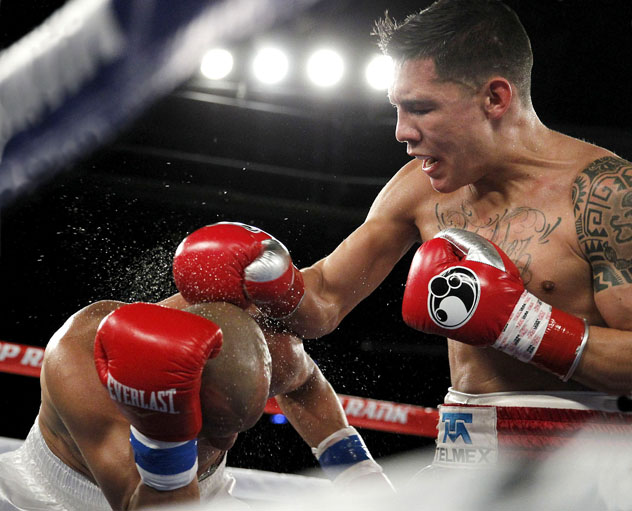 TUCSON, Ariz. – Oscar Valdez returns to his boyhood home on Saturday on an Unimas “Solo Boxeo” telecast in a reunion with family and old friends who watched him answer the first opening bell to a career that already has taken the featherweight prospect to two Olympics and an unbeaten pro record.

Valdez was 8-years-old then, just another kid in one of the many southern Arizona gyms that dot the Sonoran desert’s landscape like cactus.

Valdez recalls that he followed his dad from gym to gym. The sounds, smells and routines became familiar. They became a way of life for Valdez, now 24, who fought for Mexico at the Beijing and London Games and now is poised to take a key step up, from prospect to stardom in 2016.

“The best prospect I’ve ever had,” said his manager, Frank Espinoza, who has had a few campaign in the featherweight divisions, including Israel Vazquez and Abner Mares. “He’s got it all. He’s poised, smart and has a lot of experience from those two Olympics. He already knows what is to fight on the biggest stage.

“I think he can be Mexico’s next sensation. He has a real chance a huge star here and anywhere else.”

Valdez (17-0, 15 knockouts), who faces Ernie Sanchez in Saturday’s main event at Tucson Community Center, has generated an unmistakable buzz over the last year. His smarts and versatile skillset were especially evident in his last outing, a fifth-round stoppage in September of former contender Chris Avalos.

“I’m ready to close out the year with a great performance,” said Valdez, whose mom, Gloria Fierro has continued to live in Tucson after he and his dad moved back to his birthplace, the Mexican border town of Nogales, when he was 10.

Yes, he’s confident. What young prospect isn’t? But patience and a willingness to learn are also evident in his business-like approach.

“Of course, I’m ready for world champions, but I want to finish this year first and then, whatever comes, I’ll gladly take on,” said Valdez, who was a grade-schooler at Tucson’s Manzo Elementary, a few blocks from the ring where he’ll fight Sanchez Saturday night.

For now, he says, there is only Sanchez.

“I am really looking forward to this fight,” he said. “I will have family, friends and people who have supported me since the start of my boxing career. I do feel like I am coming home and want to give them all a great fight.”

Valdez was 127.6 pounds and Sanchez 127.4 Friday at the weigh-in for Saturday’s scheduled 10-rounder on the Top Rank/Iron Boy promoted card, which includes Olympic silver medalist Esquiva Falcao (11-0, 8 KOs) in a middleweight bout with Hector Muniz (22-13-1, 14 KOs) of Albuquerque.

In the co-main event, Jose Benavidez Jr. agreed to pay unknown Brazilian Sidney Siqueira $2,000 Friday after he was more than four pounds heavier than the contracted weight.

The fighters’ corner men and officials from the Arizona State Boxing & MMA Commission met a couple of times in a busy ballroom during the weigh-in at the Tucson Community Center, finally striking an agreement that saved the bout from getting scratched.

The $2,000 will come out of Benavidez purse, estimated to be $10,000, according to his father and trainer, Jose Benavidez, Sr., who said the contract mandated that neither be heavier than 148 at the formal weigh-in.

“The fight is on,” said the senior Benavidez, who said his son couldn’t make the weight because of the flu. “He got sick. But we knew this fight was coming and we felt it was important.”

Benavidez, of Phoenix, is lobbying for a shot at reigning Fighter of the Year Terence Crawford, a junior welterweight who is still on Manny Pacquiao’s short list for what is supposed to be the Filipino Congressman’s final fight in April. Pacquiao also is considering Timothy Bradley. He was supposed to announce his choice Friday night, but he postponed the decision.

Meanwhile, Benavidez called out Crawford during a media workout Thursday in Tucson.

“I want Crawford,” he said. “Let’s make it happen. I’m undefeated, young and ready. Let’s see if he accepts the challenge.”