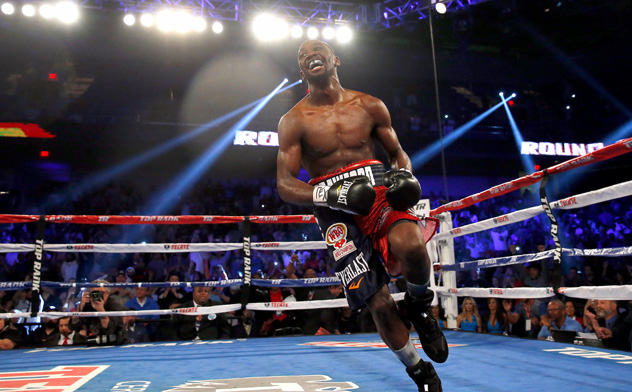 Terence Crawford has emerged as an elite fighter over the last year or so. He has become a two-division titleholder, fights in front of sold-out crowds in his hometown of Omaha, Neb., and remains unbeaten as a pro.

While some were skeptical that Crawford could have achieved these goals, one fighter believed in him all along: Timothy Bradley. Years ago, Bradley brought Crawford to Palm Springs, Calif. as a sparring partner, and was impressed by his skill-set and boxing IQ.

It is funny that both are competing for the coveted opportunity to face Manny Pacquiao on Apr. 9, most likely in Las Vegas, Nev.

There has been much speculation as to whom Pacquiao will select as his dance partner next spring. An announcement was originally supposed to be made tonight on the truTV ‘MetroPCS Friday Night Knockout’ telecast from San Juan, Puerto Rico, but has been postponed until further notice.

Crawford, who last saw action on Oct. 24 in a 10-round stoppage win over Dierry Jean, would want nothing more than to fight Pacquiao but understands it is not his call, although many fight fans seem to favor him facing Pacquiao instead of the latter facing Bradley in a rubber match.

But that calm, humble demeanor Crawford possesses does give way at times to the confidence he carries inside the ring.

“I think that it’s right that my name has been thrown around,” Crawford told a small pool of boxing scribes recently. “I felt last year was my breakout year. Winning a title against Ricky Burns, coming back and beating (Yuriorkis) Gamboa made 2014 my breakout year.”

“(As far as convincing him to fight me), I wouldn’t say anything. It’s his decision who he wants to pick to face in his last fight. He earned the right so I hope to get it.”

Crawford (27-0, 19 knockouts) has never shied away from a challenger. He was willing to fight Burns in his backyard for the WBO lightweight title, winning it in dominating fashion.

While he has fought twice as a junior welterweight, it does not seem the 28-year-old Crawford would have any qualms fighting Pacquiao at the welterweight limit (or less).

While the payday with Pacquiao is lucrative, greatness means the most to Crawford.

“I’m just trying to take my career to the next level,” said Crawford, a former RING lightweight champion and current WBO 140-pound titlist, who is promoted by Top Rank Promotions.

Crawford, THE RING’s No. 2-ranked junior welterweight and No. 6, pound-for-pound, believes being a relative new face in boxing works in his favor. Boxing fans have seen two fights between Pacquiao and Bradley and a fight between he and Pacquiao could add more intrigue.

April 9 will mark the final time Pacquiao is said to lace up the boxing gloves as a prizefighter. But that doesn’t mean he cannot fight a young and talented fighter who could still bring out the best in the Filipino fighter.

“I just look at it as I’m a new face to boxing. Once, (RING middleweight champion) Canelo (Alvarez) and myself start putting on the top shows and performances there is to put on for the public to see, then the public are going to feed into it. The public loves new faces. Floyd (Mayweather) was a new face. (Miguel) Cotto was a new face. You have the (older) fighters leaving. The fans and the public are always looking for that new face.”

So what if Crawford doesn’t get the Pacquiao fight? It won’t be the end of the world. There are other fights with top junior welterweights or welterweights to make and world title belts to win one day.

Nothing seems to get in the way of what Crawford wants to accomplish. He has a lot of upside and the sky is the limit for him.

“I know I could fight and I know my skills. I just keep doing what I’m doing. I don’t let anything distract me or get in my way of accomplishing my goals to get to the top.”