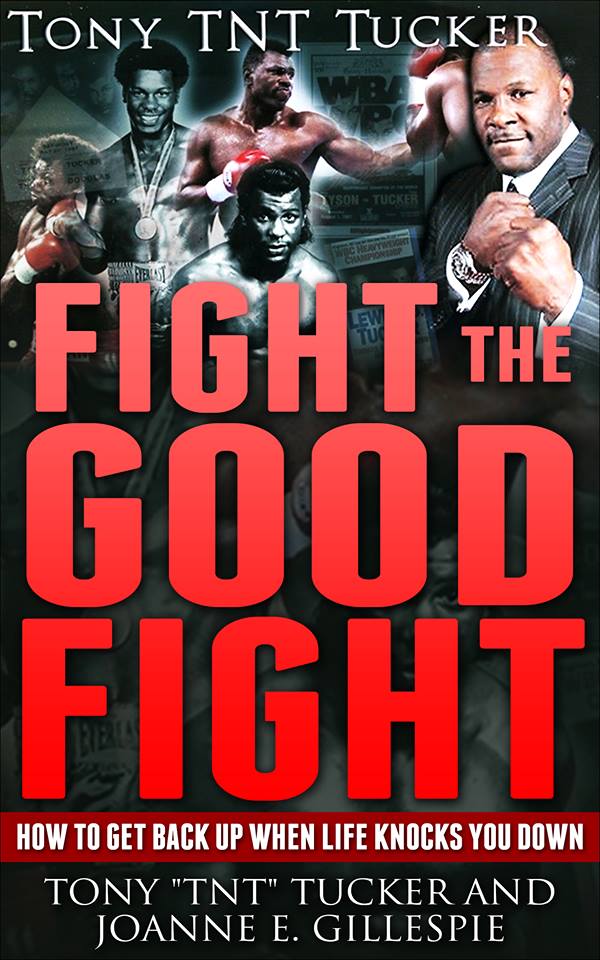 We all engage in “What if?”s, if we have spent much time on the planet.

If that road had been chosen, instead of that dead end street, the one that looked inviting, promising, but ended up being a path to a stint in Loserville…

It’s human nature to contemplate and it is a sometimes useful endeavor because it aids in self-evaluation and, maybe, choosing more wisely next time.

Ex-heavyweight champion Tony Tucker spent a good measure of time thinking about his past, his choices and what might have been while working on his book, “Fight the Good Fight: How to Get back up when Life Knocks You Down,” (co-authored by Joanne E. Gillespie, Gillespie Digital Media Group) available on booksellers’ shelves, Amazon ($19.99) and on Kindle ($9.99).

For instance…what if he hadn’t broken his right hand in sparring 10 days before he was to fight young Mike Tyson in a heavyweight title unification scrap?

“With two good hands, I was too much for Tyson,” the 56-year-old ex-scrapper, nicknamed “TNT” in his heyday, told me.

Indeed, the 14-to-1 underdog stung “Iron Mike” with an uppercut in round one on Aug. 1, 1987, at the Las Vegas Hilton; by round two, the commentators were marveling that the massive underdog was enjoying such success.

Tucker was 6-foot-5, owned a 34-0 (30 knockouts) mark at that point and showed a solid chin when tagged by the bulldog phenom.

Then 28, fighting out of Houston, he showed more than decent mobility against the 21-year-old Tyson (30-0, 27 KOs, then), who’d already started to have training issues, focus issues, dealing-with-fame-and-fortune issues.

Tucker slid left and right, grabbed when it was was wise to – the “Boneclincher” Smith method – and used his height edge to good effect.

His willingness to trade some opened eyes, as many foes were not, because Tyson’s ferocity was an obvious dissuader. Also, his experience was paying dividends – Tucker didn’t look like a scaredy-cat and he knew the blueprint: hold Mike after blunting his rushes. Not to mention, he landed a thudder in round one. “That was a good right hand by Tucker; that might have been the best shot Tyson has ever taken,” an excited HBO blow-by-blow man Barry Tompkins, said of an uppercut.

Tucker looked athletic, used a height edge well, stayed focused, not forgetting to fire and then move out of range of a counter. By round three, you were impressed by Tucker’s accuracy, his ability to get a bead on a moving target and also his adept defense: he wasn’t there to get starched in short order, no way or shape or form.

A lot of Tucker’s punches came from the side; he didn’t choose to rip straight shots and Tyson had some difficulty in picking up the trajectories.

Midway through, Tucker was still seeing beautifully; Tyson’s “wind-up and rip” launches got scoped out before they detonated. TNT showed a swell talent for blunting bomb blasts, even though he looked like he’d be easy to tattoo, as he dropped his left low all the time.

In the seventh, Tyson was throwing wild tosses and missing and getting countered. Sugar Ray Leonard marveled at the Tucker effort and Larry Merchant said he looked chill as a cold cuke. And it was the seventh…Tyson had short-circuited Trevor Berbick in round two and after the Smith bore-fest, stopped out Pinklon Thomas with violent flair in round six. Yes, there were reasons to be mildly exuberant if you were part of Team Tucker, by this juncture.

Tucker’s stamina was solid but, by round nine, his feet weren’t as active. Body shots he’d avoided were now thudding off his torso, more so. Tyson knuckled down, wasn’t demoralized by the distance vibe to this tangle. His jab was busy; he got to basics and, of course, he kept plowing forward, a motion machine in the face of Tucker for three minutes of every round. Tucker couldn’t maintain the movement momentum but his tank was full enough, so that, even in round 12, he was trading at the bell.

Tucker didn’t bow his head after the final clangs and looked still fresh, knowing he’d given a more than solid account of himself. Tyson, at age 21, had become the unified heavyweight champion and he’d done so against a pretty fair talent, one who might, arguably, deserve more credit for his skill set than he’s gotten. “Tony Tucker talked the talk and walked the walk,” said Merchant after the 12th ended.

Tucker, though, wasn’t then able to allow any symbolic victory thought into his noggin. The loss would mark a negative turning point for Tucker, who’d snagged the vacant IBF title against Buster Douglas one fight prior, via 10th round TKO.

The book touches on all the chapters of Tucker’s life, beyond this signature bout; his route was altered when the USA didn’t attend the 1980 Olympics in the Soviet Union, so Olympian Tucker wasn’t able to get that jump-start to a pro career which an medal could have provided.

Ah yes, family matters; that is touched on in the book. Dad trained Tony and they discussed the best course of action after TT broke his right hand sparring Young Joe Louis counting down to the Tyson tangle, in Aug. 1987.

“I went to a doctor, who told me it was fractured,” said Tucker, who’d relied on a crackerjack right to put opponents down. Pulling out wasn’t in the cards, he said. “We would have been blackballed,” was the thinking. And finances were a consideration; would that sort of money op be there a next time? Complex stuff, more so when you note the father-son dynamic. Maybe, Tony allows, his dad had too much sway over his decision-making then.

Yes, roads chosen can be affected by whomever is in the front seat with us.

“I had never lost a fight and to lose to Tyson in that way crushed me,” he lamented.

Losing affected his spirit; he’d been unassailable, 34-0 entering. Now, the loss was a rude blemish. And how did he handle it? Not in the best fashion; Tucker started partying more. “Yeah, I got into drugs and alcohol after the Tyson fight,” said Tucker, who said he has been clean and sober now for seven years. He today does speaking engagements, telling audiences his tale, laying out the downsides to choosing the liquid and the powder to numb and elevate, instead of using natural methods.

In his book, he informs how he managed to kick the habits and shares some of his darkest hours, such as when he was holed up in a seedy Cali motel. He was smoking coke, for a long stretch, the focus formerly employed to build the Sweet Science ladder now aimed at a torch, a nugget, a “high” which was as hard to corral as Willie Pep.

He’d get a bump, then it would wear off, and he’d go chasing again…

Anyway, on this night, he started getting edgy, paranoid. The thump-thump-thump of helicopters wormed into his head. He was situated by the toilet, ready to dump his stash, for when they landed and personnel got off and took him into custody. No, this was no mere hallucination, however. It was the evening of the Rodney King riots, on an April evening in 1992, and the local streets were ablaze with rampaging citizens, showing their displeasure at the hostile racial climate in that region, after video was released showing cops standing around a downed “perp” and whaling away on him. Tucker needed some more time to see the light, that the street he turned down was a dead-ender. But Tucker is now in a good place, he told me. “Your spirit has to be open enough to admit you have a problem,” he told me.

Fight fans should enjoy his recollections, including being signed to Don King (“When he tells you something, he does it but you got to read the fine print,” says Tucker, chuckling), how his paycheck to fight Lennox Lewis should have featured more zeroes and more about that opportunity against “Kid Dynamite.”

Tucker fought from 1980 to 1998 and boasts a 57-7 (47 KOs) record. And more than that, he can boast that he has successfully rebuffed the false salvation of booze and drugs and can be pointed to by young and impressionable souls as a role model. That’s championship stuff.

“Fight the Good Fight: How to Get back up when Life Knocks You Down” by Tony Tucker can be purchased on Amazon in paperback ($19.99) and Kindle format ($9.99) here.

Michael Woods’ new tome, “How to Wake up Hip and Sexy for Fun and Profit” will hit bookshelves, Amazon and Kindle format on the eleventeenth of Never.