How long will we wait for Canelo-GGG? 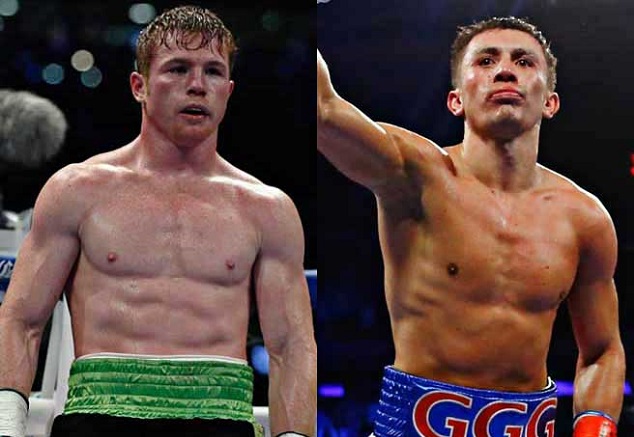 To sell well, you’ve got to give the people what they want. This is true, I’d say, in any arena.

All in all, boxing did OK this year in giving the people what they wanted, at least in terms of “big bang” scraps, what with #MayPac getting glued together and then seeing the Canelo Alvarez-Miguel Cotto/young gun Mexican vs. legendary Puerto Rican face-off leave the runway.

Can the sport’s power-brokers continue the theme in 2016? At the top or near top of many folks’ wish list is a middleweight consolidation fight between Gennady Golovkin and Alvarez. Golovkin holds the IBF and WBA straps, while Canelo boasts the WBC version and possesses THE RING championship.

I wondered if Golden Boy Promotions exec Bernard Hopkins would offer us any hints on whether we’re likely to get that wish list checked off, if we might see “GGG” vs. the red-headed Mexican in the near-ish future. The former undisputed middleweight and RING light heavyweight champion Hopkins did a hit on the Wednesday evening edition of Jim Lampleys’ “The Fight Game.”

“Will it get made?” asked Lampley…

“I think the fight will be made but I think they both have to get into a comfortable mindset and weight…whether (1)56, ’57, but I think they have to come to at least an agreement that they will fight each other by 2016, the middle or the end of 2016…The fans want it,” Hopkins said.

The WBC is trying to propel this pairing to fruition. It’s complicated; that organization would probably not have preferred that its middleweight belt was contested at a catchweight, of 155 or less, when Cotto defended his strap. And Canelo has not backed off his stance that he doesn’t want to add those five pounds and campaign at the accepted middleweight max. So…where does this leave Golovkin? He said he would come down to that 155 region before but for a Mayweather fight. The read-between-the-lines there is that the weight drain would leave GGG somewhat compromised but for the right number of zeroes on the end of his paycheck, and the chance to topple the legend that was/is “TBE,” he’d take that calculated risk. Would he – will he – fo Canelo?

Golovkins’ trainer “Honest” Abel Sanchez told me, “I will get him ready for whatever is negotiated.”

I asked WBC boss Mauricio Sulaiman where things stood re: a Canelo title defense against Golovkin. “Golovkins’ promoter, K2 (Promotions), and Golden Boy are in communications, this Friday it will be determined,” he told me.

I confess I’d be surprised if the issue was indeed laid out, ironed out and ready to wear by tomorrow. Cotto and Golovkin, it’s said, have been tangling over money issues from sanctioning and step-aside fees and such, and for things to suddenly start going smoothly…C’mon…this isn’t the Theater of the Expected, friends.

On “The Fight Game,” Canelo’s promoter, Oscar De La Hoya said, “We have to let this fight marinate…My good friend, Bob Arum, taught me that one…not too long because someone can get beat…This can be the next super-fight because it’s a real fight!”

Max Kellerman came on TGF and was asked about Canelo vs. GGG. “I think they’re going to work out a deal end of next year,” Max said but it could get kicked to 2017 too.

I also got a “marination” vibe from Golden Boy exec Eric Gomez. Could, as the WBC said, plans for a Canelo-GGG fight be clarified by tomorrow? “We will see,” Gomez said. “We haven’t decided what we want to do.”

Fans, talk to me. What does your wish list contain? You OK with a marination phase…or do you, like that typical three-year-old, want it ASAP? Log in to our comments section and tell me what you think.

Wish list…or Christmas list? Santa Claus might just have to get involved but he’ll never make a 155-pound catchweight. I suggest Kringle vs. Woodsy on the undercard in a “Tables, Ladders and Chairs” match but we should probably let that one marinate a little.