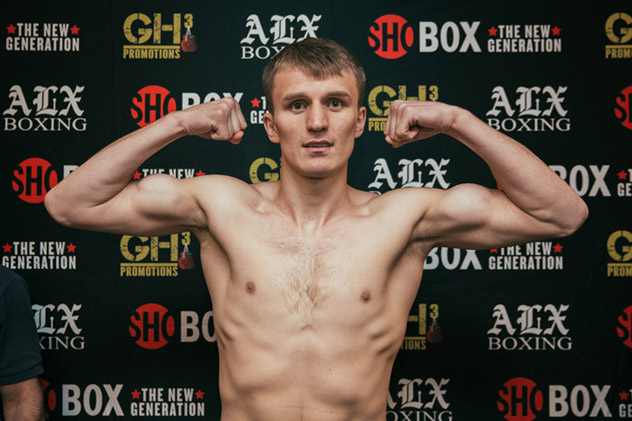 Best night of pro career: A year ago Magomedov took Michael Zerafa’s unbeaten record when they fought on the undercard of Alexander Povetkin-Carlos Takam in Moscow.


“My best result in professional boxing was the conquest of two titles,” Magomedov told RingTV.com through Egis Klimas. “The WBO Youth and champion of the WBO Asian Pacific against Michael Zerafa [who was] 15-0 [at the time].”

Worst night of pro career: Although Magomedov surged back to win, he struggled early on – getting dropped twice – against Colombian trialhorse Segundo Herrera.


“My fifth fight against Segundo Herrera was not the strongest,” he admitted, “(because my) opponent sent me to the canvas, but after the fall I was able to come together and finish the fight by knockout.”

Next fight: “Mayhem” looks to close the year with his fourth win on Saturday when he faces Mexican southpaw Jonathan Tavira in a stay busy fight scheduled for eight rounds on the undercard of Sullivan Barrera-Karo Murat in Glendale, California.

Tavira, enters the ring on the back of two loses. He has a record of 12-3, 9 KOs. He’s been a pro for 5 years and fought mostly at junior middleweight.

Why he’s a prospect: Although Magomedov doesn’t have the amateur credentials some of his countrymen do, he was still a very capable amateur and elected to make the transition to the pros earlier than many Russians.

Magomedov, who turned professional in Russia before heading to America earlier this year, trains at Glendale Fighting Club under the watchful eye of Edmond Tarverdyan, who is also the head trainer of former UFC women’s bantamweight champ Ronda Rousey.

Magomedov feels his biggest strengths are his power and endurance.

Over the years Kathy Duva’s Main Events have worked with a cache of champions including Evander Holyfield, Lennox Lewis, Pernell Whitaker as well as the current unified light heavyweight champion Sergey Kovalev.

She has high hopes that Magomedov will one day add his name to their impressive client list who won world titles.

“I think that Arif really has the chops to go all the way,” Duva said. “He has an electric persona and an exciting style. An accomplished amateur in Russia, ‘Mayhem’ has the skills and, more importantly, the will to be a force in the middleweight division. Arif just turned 23 a few weeks ago. He is so young and so talented. I cannot wait to watch his career unfold.”

The Main Events Matchmaker Jolene Mizzone is similarly high on him.

“He knows how to adjust in the ring,” she said. “The three fights that I put him in were all a test in different ways.

“First you have Derrick Findley, who is not going to lay down for anyone and always comes to fight. I had to make sure Arif could get past a guy that no one stops, to let him know, he can go the distance.

“The second fight was Darnell Boone, who we all know what he brings, he is an awkward guy that can punch. Arif found out he was fighting Boone on four days notice and had a lot of pressure on him going into the fight since all the TV commentators keep talking about Boone and his power, so he went through the mental thing there and also was in with a guy with power.

“The third guy I matched him with was Derrick Webster, who was over 6-feet tall and a boxer, so Arif had to go in there and prove he can handle a boxer and tall guy. I like that when he didn’t stop Derrick Webster he was upset with himself.

“So basically when I am matching people there is a reason for my madness, it is only going to help the fighter in the long run.

“Keep in mind that Arif is very young. The best way for fighters to improve is to fight the right fights in the ring, that is where they learn the most.”

Why he’s a suspect: Magomedov struggled early in his pro career. He only won a split decision in his debut and was down twice against Herrera. However, he appears to have matured as a fighter since then.

Mizzone sees great improvement but there is always things a fighter needs to do to continue their evolution.

“The things he can improve on are things I think all young fighters coming up need to always work on, that is his stamina and technique,” she said.

Story lines: Magomedov is from Kizlyar in the south of Russia, it’s a small town of less than 50,000 people. It is best known for its alcoholic beverages and traditional knives.

“I started boxing at age 14,” he said. “Before that I was a kick-boxer and I have been four-time champion of Russia, but I was always more attracted to boxing. Boxing is my life.”

He was always highly motivated.

“As a child I decided that when I grew up I would be a professional boxer,” he explained. “I grew up in a poor family. I walked on foot for about two hours in one direction, and in Russia are still very cold winters, so I always wanted to achieve results and have everything.”

The 23 year old is not married but has a girlfriend. In his spare time he enjoys listening to music, walking, reading, writing poetry, playing soccer and billiards with my friends.