Meet Tureano Johnson, the man who has no fear of GGG 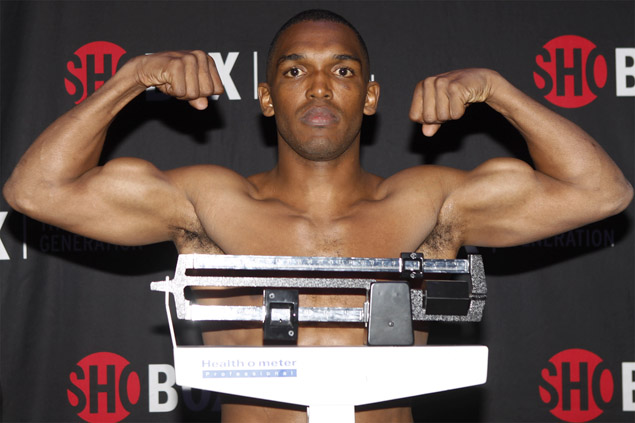 There’s a strong case to be made that middleweight is the division with the most potential for excitement. The division is long on “name” contenders who are good for an entertaining fight almost every time out, but 160 pounds is also home to the man who may be the sport’s most intimidating fighter, WBA/IBF titleholder Gennady Golovkin.

Saul “Canelo” Alvarez, who legitimized himself as a star after defeating Miguel Cotto to win the RING and WBC middleweight titles in November, would seem the logical next rival for the unbeaten fighter from Kazakhstan. But these matters are never that simple in boxing.

Though Alvarez seemed ready in his post-fight comments to jump in the ring with Golovkin, his demand that Golovkin fight him at a catchweight of 155 pounds says there is more to making that fight than crossing T’s.

Golovkin (34-0, 31 knockouts) has had that effect on a few fighters since crashing American shores three years ago. The 33-year-old has a Mike Tyson-like mythology that surrounds him. A Wikipedia entry for “high risk/low reward” could simply be a video of him skipping rope without text. Two lineal champions – Sergio Martinez and Cotto – were plagued by constant questioning over when they’d face him, and neither ever did.

That’s not to say there aren’t some brave souls willing – even eager – to jump between the ropes with the No. 3 pound-for-pound boxer in the world. Take, for instance, Tureano Johnson.

Johnson’s is a name you probably wouldn’t be familiar with unless you were among the sport’s most hardcore followers. Johnson earned the IBF’s middleweight mandatory ranking by outpointing Eamonn O’Kane on the undercard of Golovkin’s most recent victory, an eighth-round knockout of David Lemieux in October.

To many, Johnson’s desire to hunt down Golovkin may seem like a death wish, but GGG is not someone who gives the 31-year-old Bahamian nightmares.

“I believe out of all the fighters that Golovkin has faced, they have quit too early. I’m one who’s not going to quit,” Johnson (19-1, 13 KOs) told RingTV.com.

“I know one thing for certain: that I possess one thing that most fighters don’t, and that’s a heart. I grew up with heart and will to win, regardless if I’m fighting for 12 rounds. I can be down up until the last 30 seconds of the 12th round but I know inside of me I got that will to win the fight.”

If Johnson seems like he’s in the top one percentile of self-confident people, it’s because he probably is.

He comes from a family of achievers who excelled in swimming, volleyball, basketball and baseball. Johnson’s preferred sport growing up was the 400-meter dash, and says his best time was a :45.

“Even in school, it always angered me to see other students go up and collect accolades while I was sitting down,” said Johnson.

There were few spots to compete internationally on the ultra-competitive athletics scene in the Bahamas, so Johnson switched focus to an Olympic gold medal in boxing. Related to accomplished boxers Ray Minus Jr. and Lionel Glinton on his mother’s side, Johnson excelled, making it to the finals of the 2004 Olympic qualifiers. He remained in the amateurs, making it to the 2008 Olympics in Beijing, where he lost in the third round.

Johnson contemplated making another run in 2012 but opted to turn professional instead in 2010.

“I think I did sufficient,” said Johnson, who splits time between Miami Gardens, Florida, and Nassau, Bahamas. “I represented my country and it’s time for me to make a living for myself.”

In only five years as a pro, Johnson has done well to play catch-up after a late start, despite missing all of 2011 and fighting just once in 2013 due to what he calls “managerial issues.”

After a win over the 15-0 Willie Fortune in 2013, Johnson accepted a match with Curtis Stevens little over a month later. Johnson was sharp throughout, outpointing the knockout puncher before being caught by a left hook that hurt him badly in the 10th and final round. Johnson was stopped with less than a minute remaining, wobbled but still standing. Johnson vehemently protested the stoppage at the time, but now prefers to view it as a blessing in disguise.

“Had I won that fight – which I know undoubtedly that I did but God put it in a way that it didn’t happen – I wouldn’t be as prepared as I am now to fight Triple-G,” said Johnson, who is now signed with Golden Boy Promotions.

The loss was a cold reminder of how a man’s mistakes can (and often will) be magnified greater than his triumphs. Losing to a fighter that Golovkin had knocked out is a big part of why Johnson’s chances against Golovkin are dismissed outright whenever the fight is discussed.

“This game is not a game, it’s a lifestyle,” said Johnson. “It can be taken away from you, fair or unfair. So from now on I’m gonna go in and dominate my opponent, not leaving any rounds to him or knock him out. This is an unforgiving sport.”

In the five fights since the loss, Johnson has shown that the blemish on his record wouldn’t end his ambition. He beat Mike Gavronski (who was 14-0-1 at the time) just three months later, and has beaten two fighters with a single loss on their records in 2015. Johnson’s most recent fight was his first fight back with trainer Tyrone Jones, with whom he had trained prior to turning pro.

The O’Kane win put Johnson in position to fight for a title, but also made him a target on social media for fans who have told him on Twitter (@tureano1984) how he has no chance to win any title that Golovkin holds. It’s a part of the job that Johnson takes in stride.

With Alvarez and Golovkin unlikely to agree on whether to fight at 155 or 160, Johnson remains a willing and ready option for Golovkin to face, possibly in the first quarter of 2016. Golovkin’s promoter, K2 Promotions, agrees that Johnson earned his shot, but didn’t say when it would come about.

“Tureano is the IBF mandatory and unlike other champions, GGG will honor his mandatory obligations,” K2 managing director Tom Loeffler emailed to RingTV, a thinly veiled jab at Cotto for giving up the WBC title rather than dealing with his Golovkin obligations.

Emails sent to Golden Boy Promotions seeking a timetable for when Johnson’s mandatory shot will be executed were not immediately returned.

Does Johnson intend to buy time in hopes that Golovkin slows down, or vacates instead? Not a chance.

“I believe in fearing nobody,” Johnson says. “I think without a shadow of a doubt that I can beat this guy.

“It’s just common sense: This guy has two arms, two legs and a head. So of course he is beatable. He’s another fighter just as I am myself. He may possess more skills than many and may throw with more strength and speed than others, but he does not come in as an alien or even something greater than that. As far as GGG being this unbeatable force, that’s mess.”