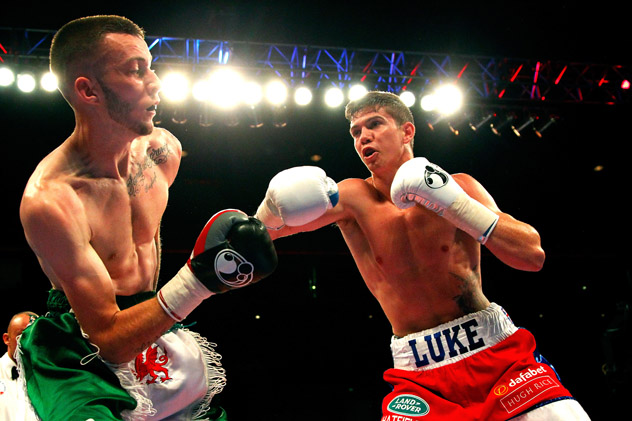 British lightweight Luke Campbell is a down-to-earth, intelligent, family man and his top priority as a prizefighter is to perform to the best of his ability and entertain a rapidly expanding fan base.

However, the Olympic gold medalist from London 2012, who faces French-based contender Yvan Mendy in London on Saturday, is one of the most spiteful operators in the business and his nickname of “Cool Hand” could easily be switched to something a lot more sinister.

“That was all about experience for me,” said Campbell (12-0, 10 knockouts). “If I were to have that fight over again I would do things a little differently. I would look to put more pressure on Tommy and break him down earlier than I did.

“I was still learning that night and taking in the occasion as much as anything.”

When a hot young talent is on the rise, one looks for things that they rarely see. For example, in the early nineties, a rising prospect by the name of Prince Naseem Hamed would detonate bursting lead uppercuts that had opponents out before they hit the canvas.

Against Coyle, Campbell would draw his opponent’s right hand and, when it fell short, counter with a syringe-like left uppercut to the body. Perfectly timed, the punch was responsible for the first of four knockdowns and it sucked both the air and the ambition from Coyle.

“I like opponents to throw certain shots, so I can have my way with them,” hissed Campbell.

Coyle was an exciting, albeit limited opponent, with whom the unbeaten Campbell had a long history and the fight itself was essentially a coming out party. Add a bucket of bad blood and a slice of hype by Sky Sports in the U.K. and Matchroom Boxing knew they had a smash hit on their hands.

“That was a huge event,” Campbell confirmed. “It was the first fight where I experienced months of real buildup and it was also the first time that my fans could be involved from start to finish. That was really important and the experience will serve me well in future fights.

“It was a very successful show and I believe it attracted more Sky Sports viewers than any other fight up to that point of the year.”

So Yvan Mendy (32-4-1, 16 KOs) is next up to bat and he has mixed in good company. The durable 30-year-old was competitive against reigning European lightweight champion Edis Tatli and also took new WBC junior welterweight titleholder Viktor Postol the full 12 rounds in June 2012. The Frenchman may have lost both of those fights but he does seem capable of providing stern resistance.

Campbell said, “Mendy is a solid fighter who can box and punch and he’s never been stopped in his career. He likes to pile on the pressure and swing the hooks in to head and body, so this should be a very good test. It’s another step up for me but one that I’m definitely ready for.

“I’ll just go out there and do my thing and I want Mendy to adapt to me, rather than the other way around. I concentrate on myself and less on my opponent’s qualities.”

Due in large part to Campbell’s victory over Coyle, the Englishman has been accorded a top 10 ranking by the WBC. That organization’s titleholder at 135 pounds is Jorge Linares and this reporter was keen to find out Campbell’s thoughts on the three-weight world titleholder, who could be a potential opponent down the line.

“Jorge Linares has got speed, skill, punching power and he’s had some great performances recently,” said Campbell with respect. “When I’m ready it will make for a great matchup but I would like to get more experience under my belt and have one or two more fights after this one.

“We’ll see where I’m at against Mendy and move on from there but in terms of ability and confidence, I believe I’m at that level right now. I leave all the forward planning up to my team but when I fight for a title, I want to be ready to win it, defend it, defend it again, and unify.”

Closer to home, Anthony Crolla and Terry Flanagan have annexed WBA and WBO lightweight titles respectively. The Brits are actually flying at 135 pounds with former two-weight world titleholder Ricky Burns, Derry Matthews and Kevin Mitchell all still in the hunt for championships.

“I’m good friends with Kevin Mitchell and we’ve been doing a lot of sparring recently,” said Campbell who, with only 12 fights under his belt, would provide a serious challenge for any of his British counterparts.

“Kevin is fighting in an eliminator for the WBA title (on the same show) and the winner will go on to face Anthony Crolla. Derry Mathews is also fighting Terry Flanagan (Feb. 13, 2016) for the WBO title, so it’s all happening in the U.K. right now. I’d like Derry to win that one because I know him personally but Flanagan is a very good boxer with nice footwork.”

On the day this interview was conducted, Campbell had announced via his official Twitter page that he had four tickets to give away for his upcoming fight. I incorrectly assumed that Matchroom Boxing had provided these but the affable Englishman was keen to point out that he had paid for them himself.

“I like to go the extra mile for the fans and that’s why they connect with me a bit more.”

Campbell vs. Mendy is an undercard attraction, topped by Anthony Joshua vs. Dillian Whyte which will be contested for the British and Commonwealth Heavyweight titles. The show is available in the U.K. via Sky Box Office.