Jennings and Ortiz cast doubts about each other’s records 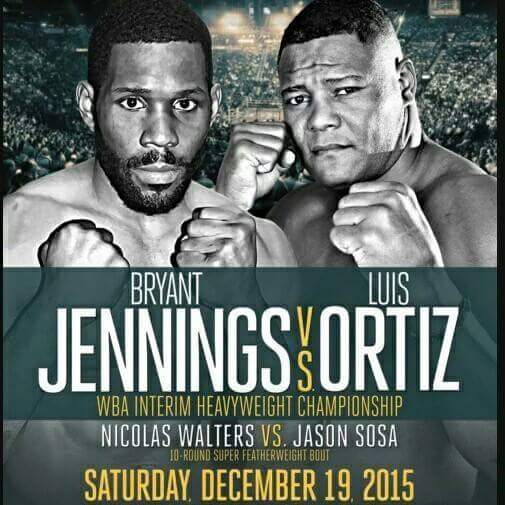 Making it big in the heavyweight division usually requires a solid amateur background, an aggressive style in the ring and a flamboyant personality outside of it. If last Thursday’s conference call featuring former world title contender Bryant “By-By” Jennings (19-1, 10 knockouts) and Luis “The Real King Kong” Ortiz (23-0, 20 knockouts) taught us anything, it is that both of them seem to have what it takes. They split most of those virtues between them but they have them, nonetheless.

The pair got on the phone with the usual pundits to discuss their upcoming 12-round bout, which will take place Dec. 19 at Turning Stone Resort and Casino, in Verona, NY., and televised live on “HBO Boxing After Dark.” They established their differences quite clearly in the early going. Ortiz, a soft-spoken guy with a flair for answering monosyllabically, met his match in the verbally gifted Jennings, who emceed this portion of the teleconference with the command of an inspired preacher/rapper.

The contrast only served to accentuate their stark differences in the more relevant department of boxing experience. Jennings is the late-bloomer coming from other sports while Ortiz is the accomplished former amateur star from an already stellar Cuban national team, in which he racked up over 340 wins along with a couple of world championships.

Jennings lost no time dismissing this difference in experience.

“(Ortiz) has a long amateur career; I have a long professional career. Your deep experience as an amateur doesn’t mean you will have a successful professional career,” said Jennings. “He hasn’t seen a real fighter like me yet. He has to make himself believe that he knows what to do; he has to prove it on December 19. But I am going to shut him down that day; that’s my plan.”

Ortiz, far from downplaying his foe’s accomplishments, declared himself a believer in the old jazz adage that indicates, ‘You’re as good as your last solo,’ and refused to allow his ample credentials in the amateur ranks to be a part of the equation.

“Every fight is important but this is the most important fight of my career so far. I am prepared to stop Jennings,” said Ortiz. “The people will know who is coming for the number one spot. I didn’t come all the way from Cuba to sit here and do nothing. I am coming for the belt; I am coming to become the heavyweight world champion. I am a boxer-puncher and will knock him out.”

Ortiz’s laconic answers suddenly gave way to a more long-winded and inspired reply when asked about his thoughts on one day becoming the first Cuban heavyweight to win a championship in a division that has featured some of the most dominant Olympic boxers ever, starting with the great Teofilo Stevenson and continuing with Felix Savon, the late Roberto Balado, Odlanier Solis and many others who have either failed to achieve the title or who spent their careers in the island-nation’s amateur system.

“I know in my heart that I am prepared physically and mentally for that moment,” said Ortiz. “I feel I have the talent, a talent that I’ve honed since my childhood, and which I have improved with my trainers here, and I am 100% sure that I will demonstrate the world that a Cuban will be heavyweight champion.”

When his turn came up, Jennings saw Ortiz’s 100% and doubled it, without hesitation.

“He’s confident but a little too confident,” said Jennings, who is enjoying his own moment of confidence after making a respectable effort against now former heavyweight champion Wladimir Klitschko back in April. “What I do is, I make sure I am well-trained and prepared to knock him out, 100 percent. The fans will love my 100 percent. I am standing my ground. I will have him crying in the ring. It is going to be real difficult for him to get over this. I’m going to fight and give my all.”

The pro vs. amateur narrative took center stage in Jenning’s colorful string of remarks and became one of his most recurrent talking points.

“This is Ortiz’s first real fight as a professional,” exaggerated Jennings. “You will see no other person in boxing that comes close to my stature. He doesn’t understand what he is up against. He has never faced an opponent like me. He has to humble himself because it is going to be an embarrassment.”

With Jennings having already failed to win a title and with Ortiz holding a bogus “interim” belt by the always accommodating WBA (a belt that is not recognized by THE RING), Ortiz feels that all that separates him from a proper title fight is a solid win on Dec. 19, a victory that would put him in the path of current RING champion Tyson Fury and WBC titlist Deontay Wilder.

“Of course I have what it takes to beat competitors like Fury and Wilder,” Ortiz said. “With training and determination, I believe that I will be unstoppable. I want to bring the belts back to the United States and become the unified heavyweight world champion.”

Jennings, however, chose to close his turn to the mike with a standard-yet-emotional call for battle in what looms as an intriguing and potentially entertaining matchup.