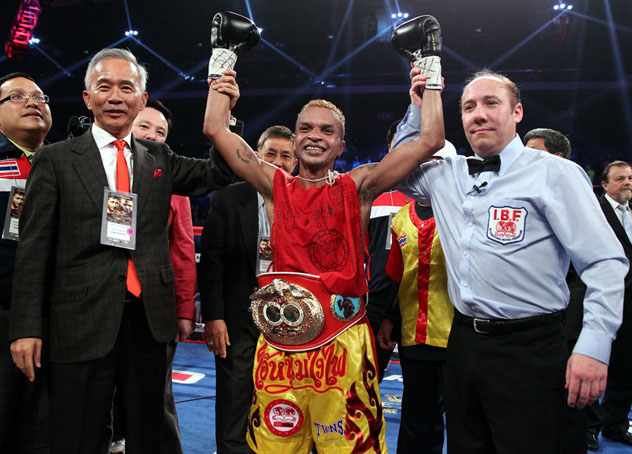 Ruenroeng, who is rated No. 2 at 112 pounds by THE RING behind Juan Estrada and champion Roman Gonzalez, started slowly before taking over in Round 3, mixing conventional jabs with his improvisational counterpunching methods.

Ruenroeng hurt Lee (19-5-1, 6 KOs) of Osaka, Japan, in that round with an overhand right that forced him to retreat across the ring.

Lee’s predictability kept Ruenroeng in his comfort zone all night as he turned the bout into a counterpunching exercise. The fight became increasingly one-sided, and was marred by frequent clinching and head butting.

Ruenroeng finally lost a point in Round 9 for holding but was not penalized for slamming Lee in Round 10 as he reverted to the ugliness that characterized his previous bout, a decision win over Filipino Johnriel Casimero in June.

Sensing he was hopelessly behind on the cards, Lee turned the heat up in the final rounds. Ruenroeng was credited with a knockdown in the twelfth round, though replays showed that Lee was slipping to the canvas before Ruenroeng threw the punch.

The loss was Lee’s first since 2013, when he lost three of four to Rey Megrino, Edgar Sosa and Rocky Fuentes.