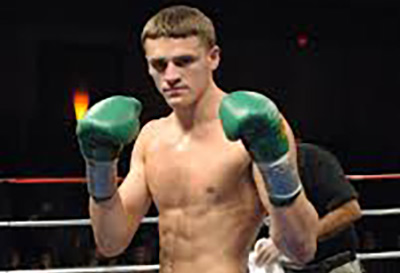 BROOKLYN – In the prelude to the Daniel Jacobs-Peter Quillin battle for Brooklyn, the undercard featured a very entertaining and different battle of New York light heavyweight prospects who brought with them sizable cheering sections. In the end Long Island’s Joe Smith, Jr. (20-1, 16 KOs) outslugged the game Will Rosinsky (19-3, 10 KOs) to win a 10 round unanimous decision victory. The official judges’ scorecards were 98-92, 97-93 and 96-94.

The bout had a frantic pace from the bell with Smith, Jr. asserting his length advantage and getting off hard shots to the body and up top.

Rosinsky, a New York City firefighter, attacked Smith to the body much to the delight of his cheering section which included members of his Engine Company 2343 from Queens, NY.

Smith, Jr. landed a giant uppercut followed by a right hook in the 5th round that hurt Rosinsky and opened up a nasty cut over his left eye. Both men continued to slug it out with Roskinsky trying to force the bout into a phone booth type war. Smith was able to time Rosinsky with lead jabs and powerful uppercuts to get the biggest win of his career.

Known for his defense and speed, Foreman relied on both and stayed disciplined behind the jab to outwork Dozier. Dozier managed to connect with several right hands but midway through the 5th round, Dozier lost the will to throw many punches. Foreman capitalized off Dozier’s inactivity and was able to land his left to the body and up top.

Unbeaten cruiserweight Luis Garcia (13-0, 10 KOs) defeated Willie Williams by first round TKO. The official time of the stoppage was 1:03. Garcia landed a vicious left hook up top dropping Williams to the canvas. Williams got back up on unsteady legs and after another left hook by Garcia, Williams’ corner be asked for the bout to be stopped.

In the opening bout of the evening, Long Island’s John Hernandez improved his record to 6-1, w KO with a unanimous decision victory over Jack Grady (0-3-1). The official scores were 40-36 x3.