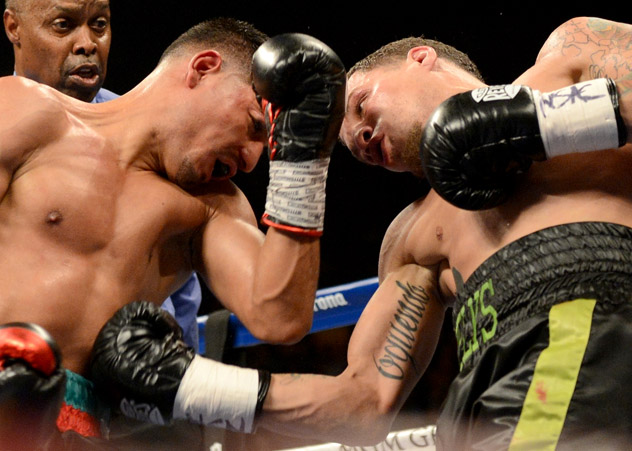 The long tradition of Puerto Rican boxers trying to make it big in the Big Apple against Argentine fighters has had its ups and downs lately, with a few outstanding wins (Miguel Cotto over Sergio Martinez) shadowed by a few heartbreaking setbacks (Javier Maciel over Jorge Melendez). On Saturday, Dec. 5 from the Barclays Center in Brooklyn (Showtime, 9 p.m ET/ 6 p.m. PT), Puerto Rico’s Jonathan Oquendo (26-4, 16 knockouts) will attempt to make his own statement in that minor but still relevant Latin American rivalry when he faces Jesus Cuellar (27-1, 21 knockouts) in a bout that could finally place him, at 32 years of age, in his island nation’s rich list of boxing icons.

And after his uneven path toward this long-delayed chance to fight for further title contention, Oquendo is fully aware he’ll be facing both his opponent in the ring and his own biological clock in a talent-rich division.

“I know how important this fight is for me,” agrees Oquendo, who bargained his way into the fight with a solid win over former three-time champion Jhonny Gonzalez in his last outing. “I know Cuellar has a very aggressive style and this fight is going to be a war. I’m thankful to everyone for this opportunity. There will be blood in the ring.”

As spectacular as his win over Gonzalez may have been, Oquendo knows that after four defeats in an equal number of attempts to take his act to the next level, he is only one misstep away from becoming a trial horse. However, he chooses to keep his eyes on the prize and sees the win over Gonzalez as a mere prelude of the next stage in his career. And that’s what has kept him sharp and focused during his preparation for this challenge.

“I didn’t want to take off a lot of time after I beat Jhonny Gonzalez. The opportunity for a (shot at Cuellar) came and I had to take it,” said Oquendo, who set his camp away from Puerto Rico for the first time. “My last victory gave me a lot more energy, a lot more hunger. I went to Mexico to visit the virgin of Guadalupe, I had a great training camp up in Palm Beach, Florida. On Saturday, you’ll see a great Jonathan Oquendo and I’ll come out victorious.”

The fight, which will be part of a star-studded card headlined by the middleweight bout between Daniel Jacobs and Peter Quillin on Showtime, will offer Oquendo a chance to avenge the loss of one of his countrymen in Juan Manuel Lopez, who was brutally stopped (and subsequently retired) by Cuellar in September of last year. Even though Lopez handed Oquendo the second loss of his career back in 2008, the motivation to avenge a countryman would be an added bonus if Oquendo secures the win.

“It’s going to be a war. I like to stay there in the pocket. It’s going to be blood in the ring and you can expect that on Saturday,” said Oquendo, who is currently on a 12-2 run since his loss to Lopez in the past five years, with his other losses coming at the hands of Abner Mares and Wilfredo Vazquez Jr. “I’ve always wanted to fight here in New York and I never thought that it would be for a world title. I’m ready for a war. I know he is a tough, strong fighter but we’ve been in there before with guys like him. We’re ready for a 12-round war.”

Considering that Oquendo has gone the full distance in his last four fights while Cuellar is in a three-fight stoppage run, that box in the scorecard could be easily checked in favor of the Puerto Rican challenger. But there’s more to beating Cuellar than just staying in the fight for the entire stretch.

“We’re confident because we’ve put in the work to get us here. Cuellar and I have the same style, the type of style that makes for a tough, exciting fight,” said Oquendo. “I know he is a very strong fighter but we are coming to win.”

And against a battle-tested champion with a proven track fighting abroad (Cuellar’s last five bouts – all wins – have taken place in the States), Oquendo will be counting on the support of the always vocal Boricua brethren to carry him to the promised land.

“I’m happy to be here in New York with the Puerto Rican fan base behind me. I never thought I’d be fighting for (title contention) here in New York on the biggest stage,” said Oquendo. “This is my chance and I’m going to leave everything in the ring. “It doesn’t matter which way, whether it’s a KO or decision; on Saturday, I’m going to win.”