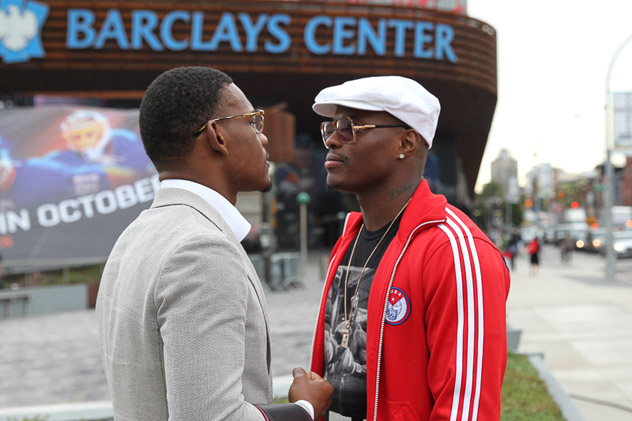 Boxing is a noble but savage science; let’s acknowledge that right now. There is an art to what the participants do and a science plays a part in who wins and who loses but, in most events, it does come down to two people looking to strike a blow or blows which render the foe disabled momentarily. It ain’t tiddlywinks; this ain’t no PlayStation game.

This known fact was touched upon, in a roundabout way, when Peter Quillin took to the mic on Thursday, at the press conference to hype his Saturday showdown against fellow middleweight contender Danny Jacobs at Barclays Center in Brooklyn.

“I’m going to do something totally different…I don’t want to be disrespectful to nobody but I actually want to say a prayer for Prichard Colon,” the 32-year-old hitter said. He was referring to the boxer who is, today, in a coma, after sustaining brain trauma in an Oct. 17 fight against Terrel Williams.
Quillin said he now knows that it’s not about titles, though, of course, he wants to keep one from Jacobs’ grasp, but he wants to impact people, help lift them up, show people who are having a hard time that they can persevere.

Props to Quillin for not doing something that most of us do much – pretend that real risks aren’t in play when two people engage in a pugilism contest. His foe, Jacobs, is cut from a similar cloth; the Brooklyner wasn’t in trash-talk mode in his time at BB Kings, where the presser was held. He did state that, even though he and Quillin have been friendly for years, “friendly” will go out the window Saturday, on a card put together by promoter Lou DiBella. The 28-year-old, who makes no secret that, after doing a battle with a vicious cancer, in-the-ring tangles are that much less daunting, said that, in the past, Quillin said he didn’t want to face Jacobs. He said he was the impetus person to make the fight happen and he believes that because it is a local rivalry. It makes sense. No, he isn’t calling Quillin a chicken but does make it clear that he positions himself as one who is willing to bust some china up while cooking up his career arc.

DiBella told assembled press – and it was a solid turnout for the event – that the winner of the middleweight clash could well rise to superstar status if they win in a certain fashion. He also spoke of another hitter on the card, Chris Algieri; he’s booked into what should be an entertaining rumble with Erick Bone. He said Algieri is something of a matinee idol and that “chicks dig him.” He will have a solid fan base at the arena; same goes for Heather Hardy. The DiBella-promoted fighter, whom he described as the “Micky Ward” of female fighters – yes, that is an IMMENSE compliment – is drawing looks from networks, especially in the wake of the hubbub from the Holly Holm Ronda Rousey fight.

Another Brooklyner, rabbi Yuri Foreman will take part in a junior middleweight tangle. He said that the bout will take place after sundown, so his fans should get to the arena and watch him scuffle because “it will be kosher.”

If you aren’t attending, Showtime Extreme and Showtime proper will be showing a bunch of the bouts.

Michael Woods is nothing if not kosher. At the very least, he’s adequately copacetic.