Johnathon Banks: ‘Klitschko is coming back for his title’ 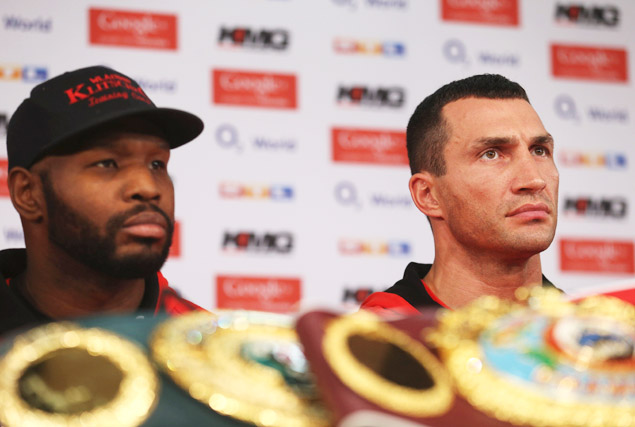 The trainer talked to RING on Wednesday; he’s still in Germany and soon will, he said, sit down with Wlad and talk turkey. Not so much what went wrong against Tyson Fury in Dusseldorf, Banks said, but more so focusing on the future. That includes an immediate rematch, which Klitschko announced via video and press release. Call it a pre-Christmas gift, said the boxer, beaten Saturday for the first time in a decade. The rematch will show that the Fury win was an aberration, he said…and Banks agrees.

But “If you’re not active, you’re not gonna win,” the Steward disciple stated.

Throw 20 punches a round and the W isn’t coming, basically…

Banks made sure to salute Fury – “I take my hat off to Tyson” – but he’s keeping it real. “It wasn’t so much what he did, come to take the title, but Wlad didn’t do enough to keep it. It’s not like Tyson dogged him out, outclassed or outgutted him. I will say, on the record, the rematch will be much, much, much better than the first fight.”

No, Banks won’t go out on that limb and predict a win. “I thought I had a guarantee in the first one,” he said, with a dry chuckle. “Nothing is guaranteed in boxing.” He will leave the preds to Muhammad Ali, still the greatest in his mind.

So, some will say – and I have to admit, it has more than crossed my mind – Wlad got old overnight, in that ring, versus Fury. Any possible truth to that?

No, said Banks. Straight up, camp was solid, he said. He believes no one gets old overnight, anyway, that you see signs in the lead-up. “I was more shocked in seeing it than I was disappointed,” he said. “When you sign up for boxing, disappointment is one of the things you sign up for, you agree to.
For whatever reason, Wladimir wasn’t letting his hands go.”

They will focus on the future and game-plan for the rematch. Wlad doesn’t need much time off, Banks said. A sequel will take place in Germany, with the ex-champ getting the respect of having the home field advantage once again.

To reiterate, no, there were no signs that the wheels were coming off the wagon in camp, the trainer said. He told me he learned from Steward to speak up or forever hold your peace if you see something. “I would have told him; I never hold back,” Banks said. “If he was not looking good, I would have told him.

“To Tyson, again, I say, congratulations. We are moving forward; we will change a few things and some things will stay the same. We will come back and regain the title. Wladimir came back after losses; people wrote him off. He was on the ground floor; now he’s not on the ground floor. Can he dust himself off and come back? Absolutely! And will he be sticking with me? I don’t see why not. I was taught by Emanuel; everything you hear me say or I do, I got from Emanuel, who taught Lennox (Lewis) and all the other champions. The rematch will definitely be even more interesting…I believe with Wladimir’s intense training, his motivation, there’s no doubt he can come back. I think he’s got a lot of youth left, got a lot of miles left on him! We will move forward and make sure it doesn’t happen again. Congrats, Tyson; you did a great job. You stuck to the course, did what you said you would…I hope he enjoys the time being champion but Wladimir is coming back for his title.”

Wladimir Klitschko might be coming back for his world heavyweight championship but Michael Woods is coming back…to write another article. I know, duh, right?!