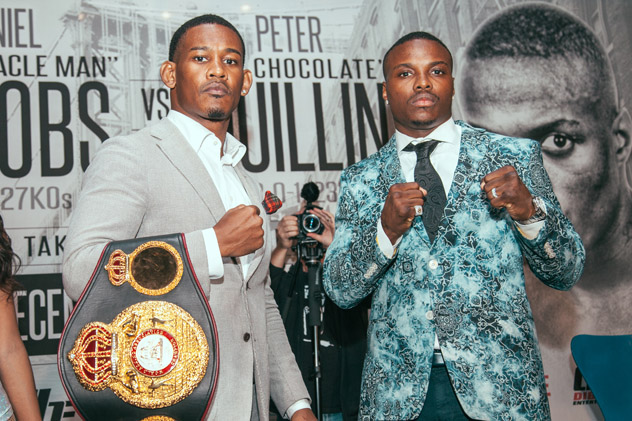 Daniel Jacobs and Peter Quillin will meet at middleweight in the “Battle of Brooklyn” on Saturday. The eagerly anticipated encounter takes place at Barclays Center and airs live on Showtime at 9:00 p.m. ET/PT.
http://www.sho.com/sho/video/titles/40639/all-access-jacobs-vs-quillin—full-episode

With local bragging rights on the line, it’s a fight neither can afford to lose. At the press conference to announce the fight, both had strong words for the other.

“This fight means everything to me,” said Quillin. “It’s two guys for the Battle of Brooklyn. We are both going to have great support in the building and this fight will really inspire people.”

Jacobs (30-1, 27 knockouts) and Quillin (32-0-1, 23 KOs) are both known for their power. Both have been on the canvas and, in recent fights (Jacobs versus Sergio Mora in his last fight and when Quillin faced Andy Lee in April), both men were able to get off the canvas (and win, in Jacobs case, while Quillin drew). It will be interesting to see who can take the other’s power; whomever does will likely win the fight.

The bout is widely thought of as a 50/50 fight; however, our experts firmly believe the scales will tip in one man’s favor.

Peter Quillin to defeat Daniel Jacobs: It’s a toss-up, I think it’s 50/50; Quillin is strong and so is Jacobs, who’s also crafty. Both have power. I think it’s evenly matched competition between the two. I would probably say Quillin.

Daniel Jacobs UD 12 Peter Quillin: Quillin figures to test Jacobs often and early with his power and aggressiveness. A knockdown wouldn’t be a surprise.

But Jacobs has shown resilience throughout his career and life. He knows how to adjust, especially with an ability to throw on the move and from angles. In the end, that will be enough for him to win on the scorecards.

Peter Quillin KO Daniel Jacobs: I think it’s an even matchup, really. I think they match up well, kinda like one fighter is strong where the other fighter is not so strong. I think Daniel Jacobs has the edge in his amateur background, which gives him advantages in some ways and I think he’s the more polished boxer. I think he has the better technique and probably the faster hands. They’re both good athletes but Quillin has the physical strength and the punching power, although Jacobs can punch a little bit himself.

So I think it’s a fight where Peter Quillin is gonna have a lot of problems with the speed and movement and technique of Jacobs early on. In fact, I think Jacobs outclasses Quillin over the first five or six rounds and I wouldn’t be surprised if he drops Quillin because Quillin swings kinda wide and his balance is not the best, so I wouldn’t be surprised if Quillin tastes canvas even if it’s a flash knockdown. I think Jacobs can catch Quillin between those wide power shots but I think Quillin will get up if he goes down. Even if he’s frustrated, he’ll try to impose himself on Jacobs and I think, gradually, over the second half of the bout, he will reach Jacobs and I think Jacobs is a bit chinny. So I think (Quillin) hurts him and stops him late. (Quillin) might be trailing on the scorecards though. Quillin by late stoppage.
Jeffrey Freeman, KODigest.TV

I don’t know exactly what round the knockout is going to come in Brooklyn on December 5 but when it does come, it will be Danny “Needs A Miracle, Man” Jacobs on the canvas and Peter Quillin celebrating a victory. Jacobs simply lacks the chin and the temperament to deal with the animalistic “Kid Chocolate,” even if they’re friendly cats outside the ring. Quillin just hits too hard for Jacobs, a fragile fighter who was recently dropped by the feather-fisted Sergio Mora before Mora’s ankle gave out. Jacobs will suffer flashbacks to the Dmitry Pirog disaster in 2010 when Quillin finishes off his buddy with a right hand in, let’s say, the fifth round.

Peter Quillin UD12 Daniel Jacobs: I’m going to take a chance on a motivated Quillin winning the Battle of Brooklyn.

“Kid Chocolate” has been in against the superior opposition and, should he run into something big, his recuperative powers look very reliable. This one has the ingredients to be a terrific fight, no matter who prevails, and I think we’ll see 12 rounds of quality combat.

Daniel Jacobs PTS 12 Peter Quillin: I’m expecting a tense, low-output encounter in which Jacobs will use his height and reach to establish his jab, which has been better than Quillin’s as of late, as well as exploit Quillin’s looser defense, which I think is the trait that separates the two in an otherwise closely-contested match. Jacobs knows Quillin has a huge punch and I think he’ll be smart enough to take what is given to him and nothing more.

It’s a great fight between two world-class fighters, hard to pick a winner as it really depends on how their styles match up on that night. I see a close hard fight that goes the distance. Whoever wins would be a great match up for “GGG” next year.

I think the size and heavier punches are gonna be from Quillin. Both of them have flawed defenses and technique, so, when they punch, they leave themselves open. I can actually see both fighters getting hurt in this fight, which would turn out be a fight similar to when I fought Jacobs – that’s exciting for the fans. The only difference is Peter Quillin, I think, takes a better punch. I think he has a great trainer in Eric Brown and is going to come with a great strategy and game plan. I don’t see it going the distance, I think maybe a late stoppage by Peter Quillin in a fight Jacobs is not losing by much but he’s gonna end up getting caught and hurt and I think maybe stopped.

Peter Quillin W12 Daniel Jacobs: It is a very close fight on paper and it will live up to the expectations. Both fighters are equally skilled and both are proven at this weight but, in terms of resilience and power, the advantage goes to Quillin by a meaningful margin. Kid Chocolate is the one who has faced the strongest, most powerful opponents so far, and his results have been impressive, for the most part. If Jacobs can establish his distance and his speed, he has a chance. But if Quillin is able to turn this into a fight, he’ll score a decisive win by decision or late stoppage.

Quillin has also been in with the better fighters during his 10-year career. He showed a strong chin agai

Cancer survivor Daniel Jacobs is a great guy but looked vulnerable against Sergio Mora in his last fight.

If the feather-fisted “Latin Snake” can knock him down, Quillin, with 23 KOs, can stop him.

Peter Quillin KO Daniel Jacobs: Both guys have been on the deck recently. Quillin didn’t get put there by Sergio Mora. Factor in Qullin’s superior power and this seems like “Kid Chocolate’s” fight to lose.

Daniel Jacobs KO Peter Quillin: I’d go with Jacobs by KO, brings more variety to the table for me, although I hope he’s a tad sharper than Quillin.

I can see Jacobs taking control from the opening round. Administering a boxing lesson for the majority of the fight. Somewhere around the 10th round, Quillin will rally late, giving the impression that he could very well pull off the upset. Jacobs will hit the canvas in rounds 11 and 12 but it won’t be enough. Jacobs will survive a close one, taking a razor-thin decision.

Peter Quillin to defeat Daniel Jacobs: Coin flip fight, I love ’em. Two youngish guns, both with explosivity and athleticism. Jacobs maybe has mental edge as Quillin has been talking like a boxer/businessman last two years. But Sergio Mora sent Jacobs to the mat last fight and Quillin fought a part timer in Michael Zerafa. Leaning toward Quillin, without massive conviction.

Final tally: 10-4 (and one undecided) in favor of Peter Quillin to win Saturday’s middleweight showdown with Daniel Jacobs.