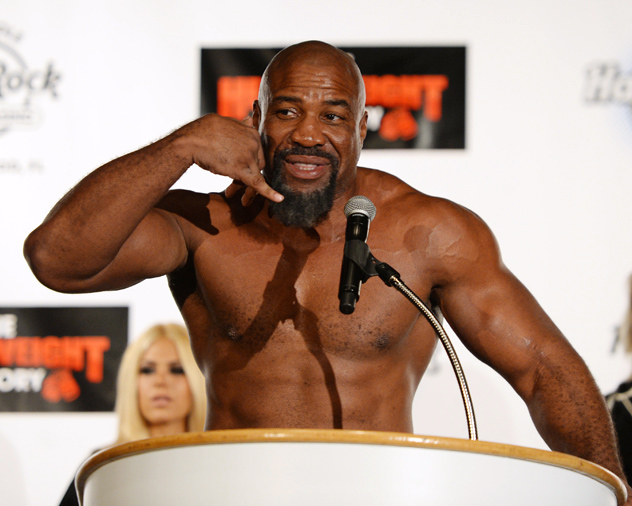 Thus far, his catchphrase, “Let’s go, champ!” has caught on more than his years-long quest to get RING heavyweight champion Wladimir Klitschko in a ring.

But Briggs has told the TMZ crew that he’s been negotiating with Wlad for weeks and a deal to face the Ukrainian-born ringmaster will be consummated.

Briggs, who turns 44 next Friday, tried his luck versus big brother and then-WBC titlist Vitali in 2010 and the result was stark. He showed cajones galore in making it to the final bell but paid for the courageous stint with hospital time.

He took a few years off and has won eight straight since then, against journeymen sorts.

I checked in with Team Klitschko exec Bernd Boente to verify the claims made in the TMZ video by Briggs: “I have no idea what Shannon Briggs is talking about! Wladimir fights (Tyson) Fury on Saturday,” he told me.

Hey, have stranger things happened? Surely…would a Wladimir vs. Briggs bout get hyped to the point in which 40,000 people in Germany might pack in to see the spectacle? I think so. This is boxing, theater of the expected…we should expect the eyebrow-raising situations as the norm much of the time.

So readers…hazard a guess…will Briggs get his wish…or will the ex-champ have to let the dream go?

It’s two days after Thanksgiving and the mantra, “Let’s go, cramps,” is still the top story in the overstuffed Woods household.