Cuadras to gun for Eto in Japan – and maybe Inoue 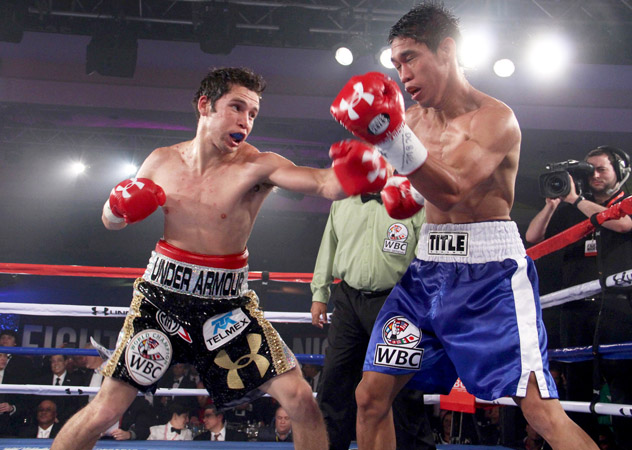 The long and illustrious history of the Mexico-Japan boxing rivalry had a hard act to follow in last week’s instant classic between Takashi Miura and Francisco Vargas but that won’t stop WBC junior bantamweight titlist Carlos Cuadras (33-0-1, 26 knockouts), of Guamuchil, Sinaloa, Mexico, from trying to one-up that fabulous performance in his impending title defense against Japan’s Koki Eto (17-3-1, 13 KOs), Saturday in Sendai, Japan.

Hoping to avoid the surprise that befell his countryman Vargas during the first few rounds of last week’s bout in the Canelo Alvarez-Miguel Cotto undercard, Cuadras will approach this fight with a lot of respect for an opponent who, in spite of a spotty record, is a known banger fighting at home with the mission of earning some measure of revenge in the storied Mexican-Japanese rivalry.

“He is the number two at the WBC. I need to be careful with him,” said Cuadras, ranked No. 2 by THE RING at junior bantamweight. “I’ve seen him fight. He is a fighter who fights a little bit sloppy. He leaves himself wide open after throwing a punch. He is taller than me, so I will have to work on getting closer but I really don’t see him as a tough fighter. I believe I will not have much trouble getting my hand raised in Japan.”

Cuadras, nicknamed “Principe” (“Prince” in English), will attempt to make his fifth defense of the title he lifted with a technical decision win over Srisaket Sor Rungvisai back in May 2014, and which he defended against Jose Salgado, Marvin Mabait, Luis Concepcion and Dixon Flores. And even though he claims he doesn’t look past Eto, it is clear that the big bout he craves would be against another Japanese fighter who has achieved an ever higher ranking in spite of having less than a fourth of Cuadras’ professional experience.

“I believe that Inoue impressed everyone because he had a few good fights and had a great amateur career but professional boxing is very different,” said Cuadras about WBO beltholder Naoya Inoue,THE RING’s No. 1 fighter in the division. “As soon as Inoue decides to face an opponent who can withstand his attack for the first five rounds, that’s where he’s going to show some cracks. I believe that a more experienced opponent could put Inoue in trouble. And I am a good candidate to face him and take his unbeaten record away.”

Living in Mexico and training under Robert Garcia in his new Riverside, Calif. facility, Cuadras finds himself as one of the top fighters in the suddenly revitalized lower weight scene, partly due to the presence of boxing’s top pound-for-pound talent in Roman ‘Chocolatito’ Gonzalez, a man Cuadras hopes to face some day.

“Fighting him would be a great fight, even though he’s at 112 and I am at 115, but I believe we can manage it. We are both signed to Teiken Promotions, so that makes it easier,” said Cuadras, who has an interesting take on Chocolatito’s style.

“I believe he is more of a brawler, so I would avoid brawling with him. I would have to box with him, move around and win, based on my speed. That would be my tactic against him. If he wants to trade leather for a moment, I would do it but I believe the best would be to box him because he is used to putting too much pressure on his opponents.”

Regardless of his ability to land a dream bout with the consensus’ most talented fighter in the world, Cuadras hopes Gonzalez will bring the attention that the lighter divisions need to make the most out of their careers.

“I hope his presence leads to more publicity and earning bigger purses because just as the bigger fighters make a lot of money, the smaller guys should get some of that action too because we throw much more punches and box and move faster,” said Cuadras. “If we finally get the extra attention from the fans and the press, I believe we will get the rewards.”

With or without Gonzalez in his future, Cuadras feels he is in a perfect position to attract some of the best talent his weight division has to offer.

“In my division, I believe I am in a good spot. I feel that Inoue is the best opponent I could hope for right now and it would be a great payday for me if we could unify the titles,” said Cuadras. “But there is also McJoe Arroyo with the IBF (junior bantamweight) title and that’s a guy I would want to fight too. He is a strong fighter. They would be the best opponents I would have in my division right now and, if I am well-prepared, I’d be able to raise my hand at the end of the fight.”

The prospect of starring in a new chapter of the Puerto Rico-Mexico rivalry against Arroyo doesn’t stop Cuadras from hoping for a big neighborhood brawl with one of his Mexican compadres.

“The one I could face is (Juan) Francisco ‘Gallito’ Estrada,” indicates Cuadras, when looking at the menu of possible Mexican foes. “He’s at 112 but we’re close; there is only a two-pound difference. I am still able to make weight for a few more fights at 115. I have no problem with weight but one more year at this weight and I will see whether I can go for (WBC 118-pound titlist Shinsuke) Yamanaka. But right now, we are having a great preparation and we are planning to be in optimal condition in Japan. I am going to fight in (Eto’s) backyard. I am going to beat him at his game and I am going to take the belt back to Mexico.”