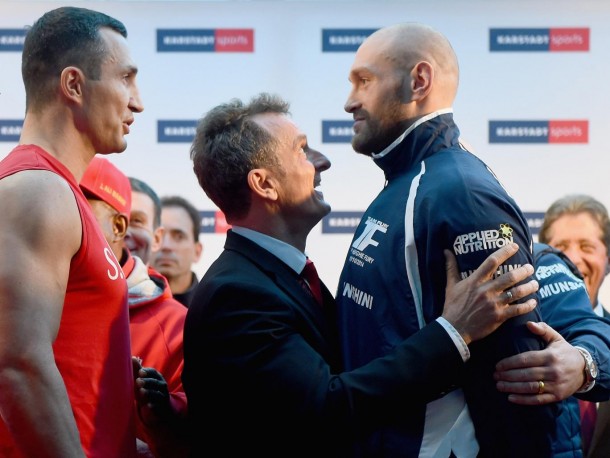 THE RING heavyweight champion Wladimir Klitschko weighed in at 245 pounds for his title bout with Tyson Fury today, who weighed in at 246. The pair collide in Dusseldorf, Germany, on Saturday, with the WBA, WBO and IBF titles also on the line.

The immaculately conditioned Klitschko (64-3, 53 knockouts) normally fluctuates between the early and late 240s, so his weight came as no surprise. Fury, far more erratic with his poundage, also looked in tip-top shape and registered his lightest official number for three-and-a-half years.

Last time out, Klitschko posted a 12-round unanimous decision over American Bryant Jennings and he is a prohibitive favorite to retain his belts against the unbeaten Fury (24-0, 18 KOs).

The British challenger, rated No. 3 by THE RING, has been supremely confident during the endless buildup to his world championship debut and that demeanor remained unchanged. The 27-year-old stared daggers at the veteran champion and vowed to end the argument inside five rounds.