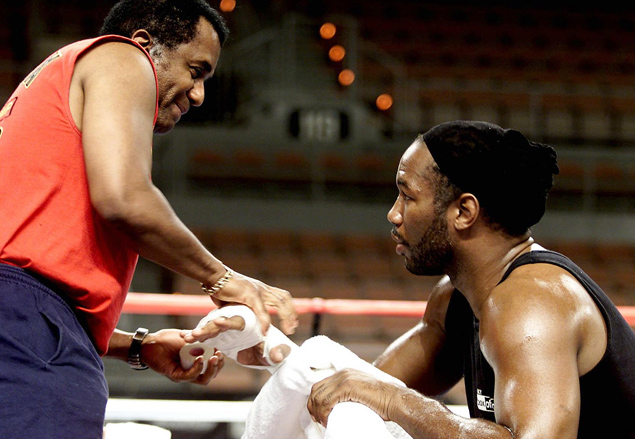 It is difficult to think of someone more qualified to break down Saturday’s showdown between Wladimir Klitschko and Tyson Fury than former undisputed heavyweight champion of the world Lennox Lewis.

In addition to being the Hall of Fame predecessor to the Klitschko era, Lewis defeated Wladimir’s brother Vitali in June 2003 and, as a massive modern-day heavyweight, has experienced that “Oh My God” moment when you finally face a fighter who is every bit as big as you are.

“Klitschko and Fury is interesting because this will be the first time that Wladimir has boxed a dangerous opponent who is equal in size,” said Lewis who punch swapped with such heavyweight behemoths as Andrew Golota, Michael Grant and Vitali among others.

“Tyson Fury can reach Klitschko with the jab and none of the smaller guys have been able to do that. When I boxed taller fighters, I’d let my jab go and catch one back and it’s a shock. You have to adjust, and that’s why this won’t be an easy fight for Wladimir early. He’ll have to adjust to the size and rhythm of Fury.”

According to Lewis, Klitschko, who defends THE RING, IBF, WBA and WBO heavyweight titles in Dusseldorf, Germany, has other things to worry about. The 39-year-old Ukrainian has made a career out of boxing off the target to give himself time and distance, but Lewis insists that the unbeaten Fury could be a real handful if he manages to close the gap.

“Fury fights well on the inside,” acknowledged the former champion. “He’s not afraid to throw punches up close and that could be significant because Wladimir is not an inside fighter. He would rather hold and reduce the chances of getting hurt.

“We also have to remember that the fight is in Germany and I can see the referee allowing a lot of holding from Klitschko. However, if Fury is able to put his combinations together and push Wladimir off, then I believe that he could give him a lot of problems.”

This reporter spoke with the irrepressible Fury as he put the finishing touches on an exhaustive training camp. During that discussion the 27-year-old challenger made it clear that his three inch height advantage (at 6ft 9) and four inch reach advantage (at 85″) were the very reasons that he would not go to the inside and that it’s Klitschko who should be wary of his jab and outside game.

“It’s hard to say if that’ll be the case,” Lewis said with a touch of doubt in his voice. “Peter Fury (Tyson’s trainer) is a wise man and he’ll know what’s required from his fighter. Tyson will have watched a lot of Wladimir’s bouts, so he’ll be aware of what’s coming. Whether they can execute the game plan they’ve devised is the question.

“Klitschko has dominated from the outside for years but only against smaller men, so he makes a great point. Me, I loved fighting big guys because I got the chance to prove that my skills were every bit as important as my size. Can Klitschko prove that with Fury? He’s never ticked that box against a live challenger.”

Fury has also made no secret of the fact that he wants to win this fight by stoppage. However, despite his natural size and athleticism, concussive hitting power is not what he’s known for. In recent years, the Englishman has boxed clever, worked the jab, switched southpaw and showed overall improvement in his technical skills.

Lewis, a big believer in being heavy-handed, countered, “When you weigh as much as Tyson Fury you’re supposed to carry a big punch. If he can’t punch at 250 pounds plus then there’s no point being a heavyweight contender.

“What’s more concerning is Fury’s capacity to take a shot. Anyone can get caught, but when someone 40 pounds lighter is putting you down (former IBF cruiserweight titleholder Steve Cunningham) then that’s a problem. We’re talking about a fighter from a different weight class. No light heavyweight or cruiserweight ever came close to getting me down.”

Fury’s gift of the gab is one of the main reasons why this fight has captured the public’s imagination. Many observers insist that Klitschko is rattled by the challenger’s off-the-wall persona and unpredictability, although Lewis dismissed that notion completely.

He said, “We’re talking about a heavyweight champion of the world with 67 fights here. Opponents have threatened him, swore at him, spat on him, and promised to knock him out. Wladimir has been there and done it.

“Who is Tyson Fury to Klitschko? He hasn’t proven himself yet, so to Wladimir this is just another guy with a big mouth. If it was Lennox Lewis saying those things then that’s something to be concerned about because you can look at my career and see what I’ve done against the best. Fury is talking but who has he boxed? Nobody on his resume comes close.

If Fury fails in his quest to dethrone Klitschko then fans will continue to debate on who is likely to succeed him. Many believe that British Olympic gold medalist Anthony Joshua is a champion in waiting but this reporter was curious to find out what Lewis would have done against Wladimir Klitschko.

“I would have gone after him,” said Lewis immediately. “Wladimir is cautious and, although there would have been some boxing at the beginning, you have to put pressure on someone with that style. I would have tried to assert my jab, but on the inside I would have punished him with uppercuts to body and head.

“I’ve always said that older brother (Vitali) was the better fighter. He couldn’t box as well as Wladimir but he was a lot more durable and took a better punch. Little brother is just little brother. I told Vitali that I would have one for breakfast and one for lunch and if you don’t show me respect then I’ll have both of you for brunch.”

Lewis, content with both his fistic resume and the good life, laughed heartily and as a former undisputed champion who bested every professional fighter he ever faced, one can hardly blame him for exuding an air of superiority. On the rare occasions when Lewis did talk the talk, he always followed it up by walking the walk.

So, does he believe that Fury can follow in his footsteps?

“Wladimir doesn’t have Emanuel (Steward) anymore and that could be crucial if the going gets tough,” said Lewis in regards to his former Hall of Fame trainer who tragically passed away in October 2012.

“Klitschko likes to punish his opponents but he’ll only go for the stoppage if he senses that the time is right. He could probably grind Tyson Fury down by the middle rounds if he goes for it, but that’s not his style. Either way, I don’t think Fury can contend with him at this point in his career and I like Wladimir in the fight.”