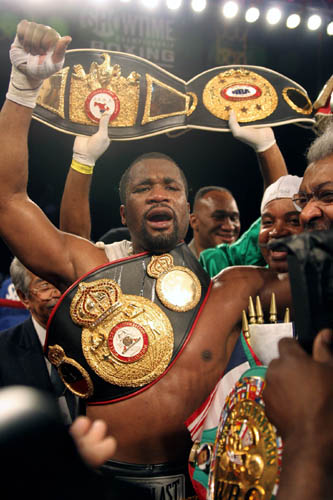 Former RING cruiserweight champion O’Neil Bell was shot and killed in Atlanta, Ga. on Wednesday in an apparent robbery, multiple outlets are reporting.

The 40-year-old retired boxer, who was born in Jamaica but lived in Atlanta in recent years, was shot after getting off a bus after midnight. Bell was walking down the stream when two men in a vehicle drove up alongside him with the intent to rob him.

“We’re being told that there may have been some type of vehicle involved, a PT Cruiser, and robbery may be the motive,” Atlanta police Lt. Charles Hampton told WSB-TV Channel 2 in Atlanta, according to the Atlanta Journal-Constitution.

Bell was pronounced dead at the scene after sustaining a gunshot and stab wound. Another man was shot in the hip and taken to a local hospital in critical condition.

Bell, a rangy, 6-foot banger whose lack of balance at times belied his crunching power, was a staple of ESPN2 “Friday Night Fights” during the early-2000s.

Bell won the vacant IBF cruiserweight title with a decision over Dale Brown in 2005 but reached the heights of boxing when he became the second undisputed cruiserweight champion after Evander Holyfield by knocking out WBA/WBC champion Jean Marc Mormeck in 10 rounds in a 2006 upset.

Bell lost the titles 14 months later in a rematch in France but not before forcing the muscular, heavy-hitting Mormeck to adapt to an uncharacteristic hit-and-run strategy to avoid Bell’s heavy punches.

Inactivity once again hindered his career as he was out of the ring for another year before being outworked by Tomasz Adamek in 2008 and retiring on his stool in the eighth round. Bell returned three years later and was knocked out in two by Richard Hall before concluding his career in Dec. 2011 with a first round knockout of Rico Cason.

Bell is the second former champion gunned down in Atlanta in recent years. Former welterweight and junior middleweight champion Vernon Forrest was shot to death in July of 2009 during a carjacking attempt.