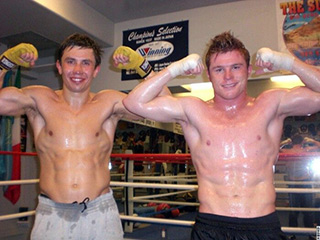 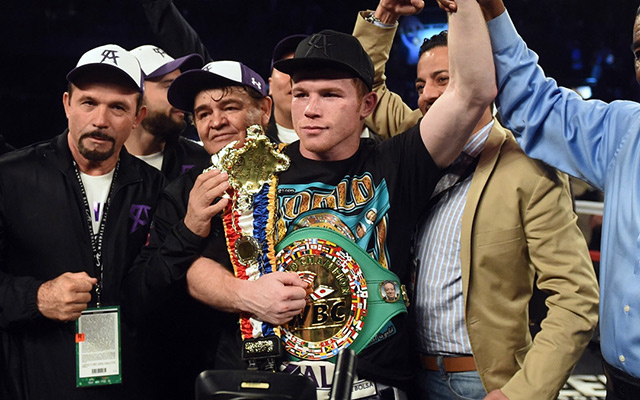 The highly anticipated showdown between Saul “Canelo” Alvarez and Miguel Cotto wrapped up this weekend with Alvarez leaving the Mandalay Bay Events Center in Las Vegas victorious in claiming the Lineal, WBC and THE RING middleweight titles. The only fight that makes sense for the follow up is an Alvarez-Golovkin war on Cinco De Mayo of 2016, right?

Well, not really, I don’t think.

I’m still trying to make sense of it all.

Ever since Gennady Golovkin throttled David Lemieux in October, it appeared that whoever stood tall in the battle of Puerto Rico vs. Mexico would punch their ticket to a unification fight against GGG. But then things got all sketchy when both Cotto and Canelo made it clear that they were extremely apprehensive with the idea of facing GGG at the middleweight limit of 160 pounds.

What’s that you say? They fought for a middleweight title over the weekend? Crazy, right?

But considering that these two fought for a middleweight title at an agreed upon catchweight of 155 pounds, neither felt that another five-pound climb to face Golovkin would be worth it right now. No matter that this would arguably be the biggest fight that could be made in boxing, the risk would be too high given the weight differential. It sounds silly to some, but makes perfect sense to others considering that both Canelo and Cotto would likely be the “A” side in a bout with Golovkin.

So the Internet debated and discussed whether or not it made sense for the winner to face GGG next. And then Cotto decided that the WBC title he’d be forced to defend against Golovkin wasn’t worth the hassle and declined paying the $1.1 million in fees ($300k in sanctioning fees + $800k in step-aside money for Golovkin). Thus, he was stripped of the WBC title and essentially said that he would have no parts of GGG. Then the fight happened, Canelo won in an entertaining, but slightly underwhelming bout.

It wasn’t the barnburner that most expected, but it was an impressive showing by Canelo nonetheless. Afterward, HBO’s Max Kellerman asked the million-dollar question about Golovkin and Canelo somewhat affirmed that he wouldn’t back down from the challenge. It was a much different tune than the one Canelo sang a few weeks ago about conceding any weight advantage to the heavy-handed fighter from Kazakhstan. But maybe he was hanging onto the idea that GGG might drop a few pounds to make the fight happen. Or, he was just refusing to show anything less than machismo in front of his dear fans.

Then the press conference happened and Canelo reiterated that he would face GGG if he were ordered to. And that was that.

But there’s this dilemma that I am having trouble wrapping my head around. Did anybody see how big Canelo was on fight night? He was easily clocking in at between 170-175 pounds. His size dwarfed Cotto and certainly assisted in both the power advantage as well as the ability to absorb punches. Everything Cotto threw at the Mexican had little to no effect. Meanwhile, whenever Canelo landed, it looked like it hurt. Those of us in press row joked about how we were watching a light heavyweight beat up on a junior middleweight.

But now it’s difficult to make sense out of Canelo’s position. Obviously, at the age of 25, it’s a lot easier to shuffle up and down weight classes than it would be for someone in their 30s. Perhaps that is the physical advantage he is looking for against Golovkin by draining him as much as he can. But when you look at Canelo, it’s easy to see that he would likely outweigh Golovkin on fight night, even if they agree upon a 160-pound weight limit.

Honestly, there’s no reason why a Canelo-GGG fight shouldn’t happen sooner rather than later. Maybe Alvarez’s promoter Oscar De La Hoya doesn’t want to put this biggest star at risk against an opponent that has made a judge’s job a paid day off. Or, maybe the idea is build the fight up more so it could do even better numbers. Either way, all of the primping and posturing is unnecessary. If you aren’t ready to fight for the middleweight title, then don’t act like it means that much to you. More importantly, if you want to give the fans what they want, don’t lie to them. They’ve had enough of the tall tales with everything that came with the Mayweather-Pacquiao negotiations.

Boxing is in a position where it needs to rehab its image after Mayweather-Pacquiao soured the taste in everyone’s mouth. It was evident how it affected the buzz heading into Cotto-Canelo for casual fans. In order to get past it, the boxing community needs all of the big fights and none of the politics.

Canelo-GGG doesn’t necessarily have to be on Cinco De Mayo but it sure would be nice to make the fight happen rather than continue to feed GGG unworthy opponents. He deserves better and so does the sport of boxing.