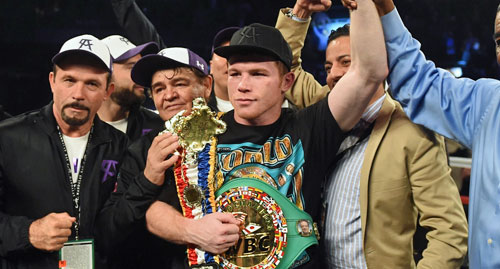 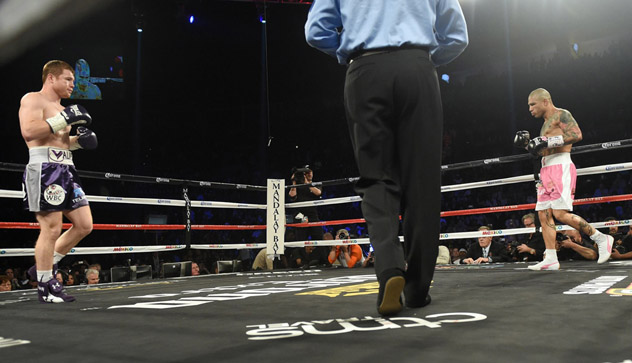 Canelo Alvarez: The new RING middleweight champ deserves a lot of credit after defeating Miguel Cotto by a wide unanimous decision on Saturday night in Las Vegas. He beat convincingly a future Hall of Famer who remains a very good fighter at 35 years old, the most important victory in the 25-year-old Mexican’s still-young career. That said, I left the Mandalay Bay Events Center wanting more from Alvarez, who was more efficient than he was dynamic. I was impressed with his underrated defensive abilities; Cotto landed only 21 percent of his punches, according to CompuBox. And he made the most of the punches he threw; his 40-percent connect rate on power punches stands out. That’s the good. The bad? He almost completely abandoned the punch that sets up power punches – the jab – and threw combinations only when Cotto was brave enough to stand in front of him. In other words, he did enough to win but not much more. As one observer put it, “Canelo always drives 65 miles per hour.” I think he should push down a little harder on the gas pedal if he wants to make the most of his career. He should show more fire, attack with more ferocity more often. I would’ve told him to lower the boom in the eighth or ninth round, go for the knockout, finish the job to put an exclamation point on a fine performance. Alvarez (46-1-1, 32 knockouts) gave it shot in the final round but by then it was too late. Opportunity lost. Again, he should be proud of his performance on Saturday. He fought well. He simply could’ve accomplished more.

Miguel Cotto: The old pro performed better than I thought he would even if he came up well short of victory. I thought he boxed well, particularly from a defensive standpoint. I thought Alvarez was frustrated at times over his inability to land more punches. And I thought Cotto (40-5, 33 KOs) was resilient; he took 118 power punches and was still standing at the final bell, which I didn’t expect. I thought this version of Cotto was light years better than the one who lost badly to Austin Trout in 2012, after which some believed he was finished. The problem on Saturday night was that Cotto had a more difficult time than Alvarez finding his target, landing only 129 (not even 11 per round) of 629 punches. And when he did land, his punches didn’t faze his naturally bigger opponent one iota. I got the feeling he couldn’t hurt Alvarez with his best punch. I think the result confirms what many believed, that the significance of Cotto’s recent three-fight run with Freddie Roach in his corner was overstated. Knockouts of Delvin Rodriguez, a damaged Sergio Martinez and Daniel Geale are commendable but not particularly meaningful. This isn’t to say that Cotto is finished as an elite fighter. He took a big risk by fighting Alvarez – in part because of a big payday – and it didn’t pay off in terms of results. However, the Cotto we saw on Saturday night remains one of the better fighters in the world. I suspect he’ll demonstrate that again sometime soon.

Alvarez vs. Golovkin: Talk of a showdown between Alvarez and Gennady Golovkin started only minutes after the fight when Alvarez was asked in the ring whether he’d fight the Kazakhstani middleweight. The earliest it could happen is late next year, perhaps in September. I think both camps have other things in mind for the immediate future and they want the potential superfight to build a little bit more before taking the plunge. Negotiations probably won’t be easy. Alvarez said after the fight that he doesn’t plan to move up to 160 pounds, the weight at which Golovkin fights, and Golovkin has said he’s not interested in coming down even for a catchweight. This is the fight fans want, though. And the fighters would make a ton of cash, which is a powerful motivating factor to reach a deal. I think Alvarez and Triple-G will find a way to make the fight happen – eventually. Who wins? I don’t think there’s much doubt. Golovkin is not only a better, more polished boxer and bigger puncher (read: 21 consecutive knockouts) than Alvarez, he also is naturally bigger. That’s not a formula for success for the Mexican. And he and his handlers know it. That’s why he’ll almost certainly stick to his demand that Golovkin come down at least a few pounds for the fight. That might afford Alvarez his best chance at victory. We’ll have 10 or more months to talk about one of the most interesting possible matchups in boxing.

The best fight of the night at Mandalay Bay was the brawl between WBC junior lightweight titleholder Takashi Miura and Francisco Vargas, which many people expected from two proven warriors. Vargas (23-0-1, 17 KOs) hurt Miura (29-3-2, 22 KOs) in the first round. Miura put Vargas down in a wild fourth round. Then, in the ninth, a seemingly worn out Vargas, his face bloody and battered, put Miura down and hurt him badly and followed with a prolonged, vicious barrage of damaging blows that forced referee Tony Weeks to stop the fight 1:31 into the round. Thus, Vargas took the WBC belt but both fighters won the hearts of fans. Rematch? ÔÇª The dud of the night was the Guillermo Rigondeaux–Drian Francisco fight, which also was predictable. Rigondeaux (16-0, 10 KOs) easily defeated Francisco (28-4-1, 22 KOs) – 97-93, 100-90, 100-90 – but an utter lack of action elicited repeating booing from a bored crowd. ÔÇª The dumbest move was made by whomever was in charge of the music entertainment before the main event at Mandalay Bay. During the performance, two loud booms – apparently part of the show – rattled many of those in attendance. I find it unfathomable that no one said during pre-entertainment meetings, “Hey, in light of the terrorism threat, it might be not be a good idea to include explosions in the festivities.” The idiot who allowed it to happen should be fired immediately. Seriously. ÔÇª

Ronny Rios (25-1, 10 KOs) outpointed previously unbeaten contender Jayson Velez (23-1-1, 16 KOs) in a 10-round featherweight bout on the Alvarez-Cotto undercard. I remember thinking early in Rios’ career, when he was among a group of young fighters who received exposure on Golden Boy’s Fight Night Club, that he was the best of the bunch. That was never more evident than on Saturday night. Rios is one to watch. ÔÇª Say whatever you want about Arthur Abraham’s limitations – and you might be right – but the guy just keeps on winning. Abraham (44-4, 29 KOs) defeated the capable Martin Murray (32-3-1, 15 KOs) by a split decision to retain his WBO super middleweight title Saturday in Hannover, Germany, his fifth successful defense. Abraham has won eight consecutive fights – yes, all in his home country – and is 12-1 since completely bombing in the Super Six World Boxing Classic. Not bad. ÔÇª Anthony Crolla (30-4-3, 12 KOs) left no doubt this time. The talented lightweight stopped Darleys Perez (32-2-1, 20 KOs) in five rounds in their rematch to take the WBA lightweight title in Manchester, England, Crolla’s hometown. They fought to a draw in July. … I don’t even know what to say about the fact “bantamweight” Randy Caballero came in 5 1/2 pounds overweight for the first defense of his IBF title against Lee Haskins on the Alvarez-Cotto card, after which the fight was canceled. Caballero (22-0, 13 KOs) lost his belt on the scales; it was then awarded to Haskins (32-3, 14 KOs). Caballero and his handlers had no reasonable explanation. I heard the word “unprofessional” bandied about in the media center, which might be on the mark. I thought it was just bizarre more than anything else.