Canelo Alvarez proves to be too much for Miguel Cotto 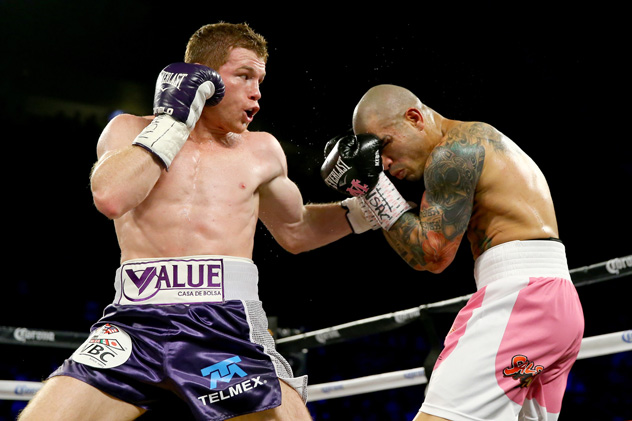 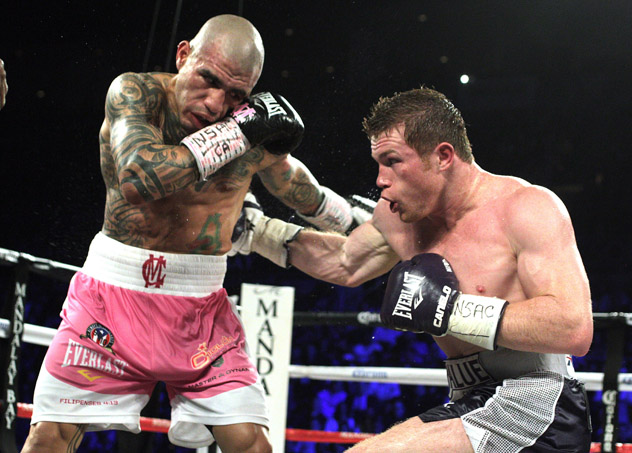 LAS VEGAS – The kid was too good and too strong for the veteran.

Miguel Cotto looked every bit the polished, experienced boxer against the younger Canelo Alvarez on Saturday night at Mandalay Bay Events Center. The Puerto Rican jabbed fairly effectively, was busy and moved well for a 35-year-old.

Alvarez? He landed the bombs, the hard, accurate punches that caught the attention of an approving crowd and the judges. Cotto was never seriously hurt but, in cumulation, he took quite a few hard punches.

Thus, Alvarez, a 25-year-old former two-time junior middleweight champ, added the RING and WBC middleweight belts to his growing collection. He is the first Mexican fighter to win a RING title above 154 pounds.

Cotto, now the former RING 160-pound champ, had been on an impressive roll since hiring Freddie Roach as his trainer.

He had stopped Delvin Rodriguez, a gimpy Sergio Martinez (to win the RING belt) and Daniel Geale, leading many to believe the old pro was back near peak form. However, Alvarez isn’t Rodriguez, that version of Martinez or Geale.

Cotto was competitive for much of the fight, jabbing, moving and taking advantage of some of the openings that presented themselves. He just couldn’t get enough done, as Alvarez, moving his head and sometimes his feet, proved very difficult to hit cleanly.

And when Cotto did land flush, his punches barely made Alvarez – the naturally bigger fighter – blink.

Meanwhile, Alvarez (46-1-1, 32 knockouts) was more efficient than brilliant. He threw relatively few punches – only 40 per round, according to CompuBox – and never seriously hurt Cotto. However, he clearly landed the harder, more-meaningful shots.

Alvarez’s fans, who chanted their hero’s name a number of times during the fight, certainly liked what they saw. Every punch he landed seemed to be greeted with wild cheers.

The most-entertaining round was the eighth, during which the fighters stood toe-to-toe and pounded away. The final round, in which both tried to close the show, was similar. And each time it was Alvarez who got the better of the action.

Thus, when the scores were announced, the crowd went nuts but few were surprised. Alvarez reacted by jumping onto the ropes in one corner and thrusting his arms in the air. He was well aware that he had just beaten a future Hall of Famer in the biggest fight of his career.

Afterward, he poked his head into Cotto’s dressing room to give his regards. “I admire you,” he told Cotto.

“I have a lot of respect for Miguel,” Alvarez said. “He is a great champion and a great fighter. We knew going into this fight that it would be a difficult journey but I feel that I was the faster and stronger fighter tonight.

“I wasn’t hurt by his punches. ÔÇª I was fully prepared for what Cotto was going to do in the ring, whether that was (to) take a defensove stance or be the aggressor.”

Cotto (40-5, 33 KOs) and his team weren’t pleased after the fight. They didn’t claim victory but thought the scoring was off.

“We thought it was much closer than the scorecard showed,” Roach said. “It was a very competitive fight. Miguel’s defense was unbelievable.”

Cotto was more concise: “Wow.” He then turned to Roach, to whom he has become very close: “Are you OK? That’s all that matters.”

What’s next for Alvarez? The world would like to see him tangle with Gennady Golovkin, the hard-punching middleweight who is building a large following in the United States.

Alvarez’s handlers are targeting Golovkin but they won’t say when it might happen. Alvarez says he also likes the idea – but on his terms.

The bout on Saturday was fought at a catchweight of 155 pounds, where Alvarez, a natural junior middleweight at the moment, is comfortable. Golovkin, a 160-pounder, has said he doesn’t want to go down in weight to make the fight.

The public pressure and promise of a large payday probably will push them to compromise.

“I’m not afraid of any fighter,” Alvarez said. “GGG is a great fighter and he is my friend. I have respect for him but if we do fight, it’s going to be at my weight class. I’m the champion, I don’t have to do what he wants.”

Alvarez hadn’t been a champion for five minutes and he already was using leverage. He has become a real pro.